Boeheim scores 29, Syracuse rallies from 20 down in 2nd half 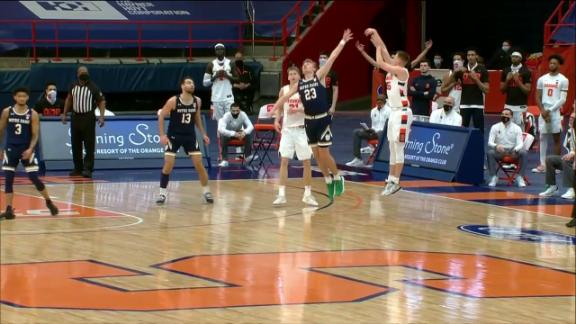 Trailing 55-35 with 16:49 left, Syracuse used a press to get back in the game and outscored the Fighting Irish 40-12 the rest of the way to win its third straight game and reinforce its NCAA Tournament resume.


"We had to get stops. We had to play better defense," Orange coach Jim Boeheim said. "We thought we could get back in. We felt we had to press. We made a couple of steals, we sped them up a little bit and they got out of rhythm on offense.

"I just can't believe we got the stops we got, that the press worked so well," Boeheim added. "They weren't just missing shots. We were not giving them shots. That's hard to do against a team like Notre Dame. I'm still shocked by what this team did today."

Buddy Boeheim made 10 of 19 from the field, including 6 of 10 from the arc that gave him 182 in his career, moving him into 10th place in Syracuse history. Twenty of his points came in the second half. Marek Dolezaj added 18 points and Quincy Guerrier grabbed 14 rebounds to go with nine points for the Orange (13-6, 7-5 Atlantic Coast Conference).

"My teammates did a great job finding me, just setting screens for me," Buddy Boeheim said. "I got some really good looks and it felt good to finally see some go down. It's a big win for us. We needed to win that. We never gave up. We just fought and stayed together. We know that we can play like that all the time."

Trey Wertz led Notre Dame with 17 points, going 5 of 8 on 3-pointers. Dane Goodwin added 13 points, Nate Laszewski had 11 points with 12 rebounds and Juwan Durham 10 points with three blocks that moved him past Irish assistant Ryan Humphrey into third place at Notre Dame with 167 in his career.


Both Syracuse and Notre Dame were returning to action after their Wednesday games were postponed because of opponents' COVID-19 issues. They were originally to face each other on Dec. 22 but that game was postponed.

Syracuse plays at Duke on Monday while Notre Dame travels to Louisville on Tuesday.