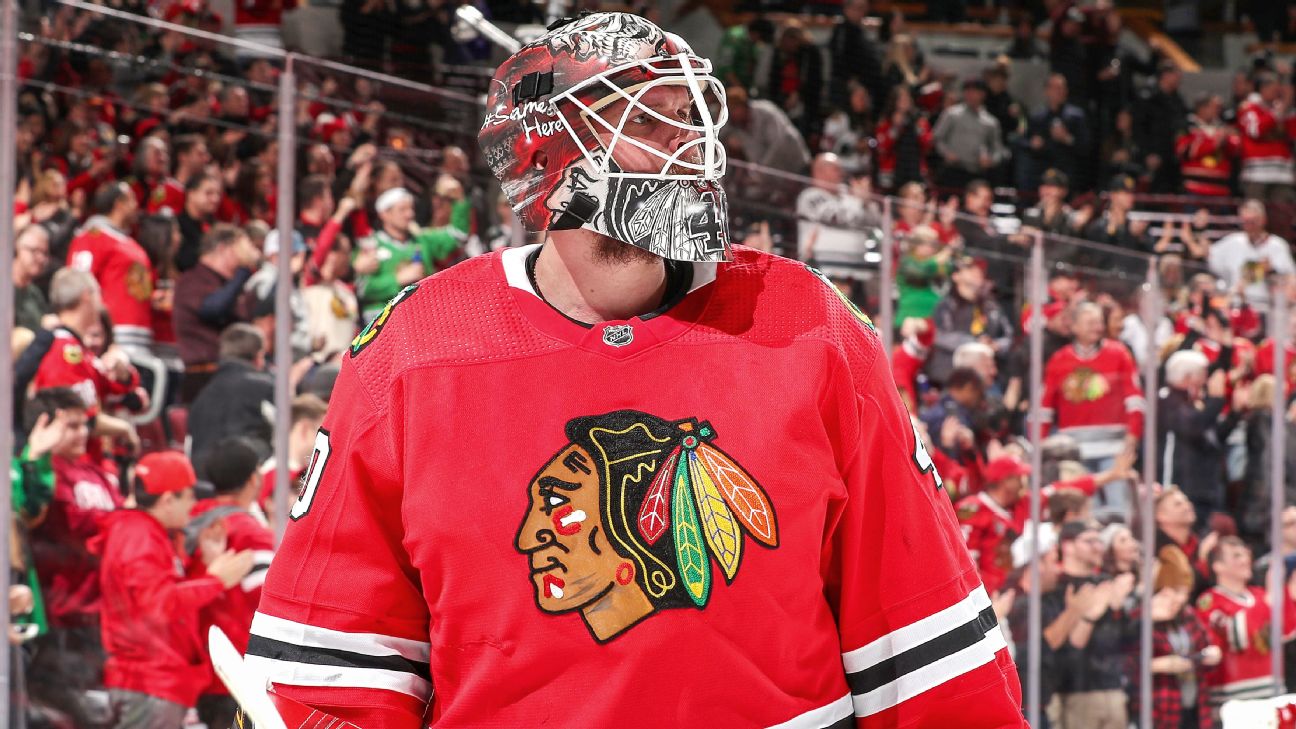 Seriously, how can any prognostication made at the midpoint of the NHL regular season compare to "a team in last place with an interim coach and a rookie goalie is going to win the first Stanley Cup in franchise history?"

Nevertheless, we're tasked with making 31 declarative statements about NHL teams in the second half of the season, so let's get bold:

Note: Emily Kaplan made predictions on the Metropolitan and Central teams, while Greg Wyshynski handled the Atlantic and Pacific.

Despite a bad season, and an increased concern about his fit with the team after his name was circulated in talks for Justin Faulk earlier this season, Ondrej Kase remains a Duck through the Feb. 24 trade deadline.

Despite being on pace to miss the mark, Phil Kessel becomes a hot desert dog down the stretch and tops 20 goals for the 12th consecutive season.

The Bruins make their annual trade for a winger at the deadline, and this time it's Tyler Toffoli of the Kings joining the black and gold for the playoff run.

The Sabres miss the playoffs again, and they either hire a president of hockey operations above Jason Botterill or fire their general manager outright.

After a disappointing season, the Flames trade Johnny Gaudreau to an Eastern Conference team to free up the cap space ... to sign Taylor Hall to a seven-year free-agent contract this summer.

Erik Haula will lead the team in goals. The former Golden Knight has been terrific when he's available, but injuries cut into his first half. Expect the Finn to catch fire this spring.

The Blackhawks reach a long-term extension with Robin Lehner to be their goaltender of the future. What does that mean for Corey Crawford? He takes a short-term deal with Chicago this summer, or decides to retire.

Nathan MacKinnon is approached once again by TMZ cameras, and this time he not-so-humbly accepts that he truly has become a celebrity.

Columbus will make the playoffs. The Blue Jackets have been playing like a playoff team for the past month, but if you would have told this to someone after the great exodus that was summer 2019, you would have been called nuts.

Alexander Radulov will finish with 30-plus goals for the first time in his career. He's not on pace to do it now (only 12 so far), but Radulov can easily get on a hot streak -- and he's heating up.

GM Steve Yzerman uses his Jedi powers to manipulate the lottery balls, earning the Red Wings the top pick in the draft and a franchise player in Alexis Lafreniere.

Connor McDavid outscores Leon Draisaitl for the season, with 48 goals and 125 points, setting a new career high in both categories.

Sergei Bobrovsky quiets the haters and earns his money with another .940 save percentage March to lead the Panthers to the postseason.

The Kings trade both Alec Martinez and Tyler Toffoli before the deadline, and get a first-rounder for one of them.

Luke Kunin will finish with 20-plus goals. He's been a key part of the Wild's checking line (GEEK Squad forever), but the 22-year-old Kunin is also coming into his own offensively.

The Canadiens become a seller at the deadline and move Tomas Tatar at the height of his value for a first-round pick.

John Hynes will lead the Predators to a Stanley Cup. The past six coaches to win a Stanley Cup were on their second, third or fourth coaching jobs. Make it seven straight as Hynes takes this ready-to-win roster all the way.

Nikita Gusev will finish the season with 60 points. The Russian had a rough start, particularly defensively, but is finding his stride in the North American game. Hey, maybe not all of Ray Shero's summer moves were bad.

The Islanders will make the biggest splash on trade deadline day. It's bold because nobody ever knows what Lou Lamoriello is going to do. But his team could use some scoring help, and he'll swing for a big name.

Igor Shesterkin proves he's the best Rangers goalie (to win right now) by the end of the season. What does that mean for Alexandar Georgiev? Henrik Lundqvist? Ah, that's a summer problem.

Despite several teams seeking to trade for him, Jean-Gabriel Pageau re-signs with the Senators on a six-year extension.

The Flyers will become road warriors to clinch a playoff spot. To date, they have played much better at Wells Fargo Center (especially goaltending). That's going to change.

John Marino crashes the Calder Trophy race and earns at least a nomination. Awards voters are often swayed by splashy stats, but the 23-year-old defenseman has been insanely consistent in his first NHL season.

Despite leaguewide calls for Joe Thornton to waive his no-move clause and accept a trade to a contender, Jumbo plays out the string with the Sharks in his farewell NHL season. And then he shaves.

The Blues don't finish the season atop the Western Conference -- a place they've held for most of the season. Hey, the Stanley Cup hangover has to set in at some point. St. Louis will still comfortably make the playoffs, though.

The Lightning sweep their first-round opponent in the Eastern Conference playoffs before reverting to their old ways and losing in a Game 7 in one of the next two rounds.

The Leafs overcome their obvious defensive flaws with a Conn Smythe performance from Frederik Andersen and become the third team in five seasons to win the Stanley Cup after an in-season coaching change.

The Golden Knights win Game 7 of their first-round playoff series after video review overturns a major penalty. Vegas becomes the first arena in NHL history to chant "Thank you, Bettman."

The Caps will give Ilya Samsonov more starts than Braden Holtby over the second half. It's a changing of the guard in Washington. Say hello to the new franchise goalie.

Dustin Byfuglien returns. The 34-year-old defenseman (who is technically suspended) has been rehabbing a surgically repaired ankle. Byfuglien will give it one more go on the ice before he retires.