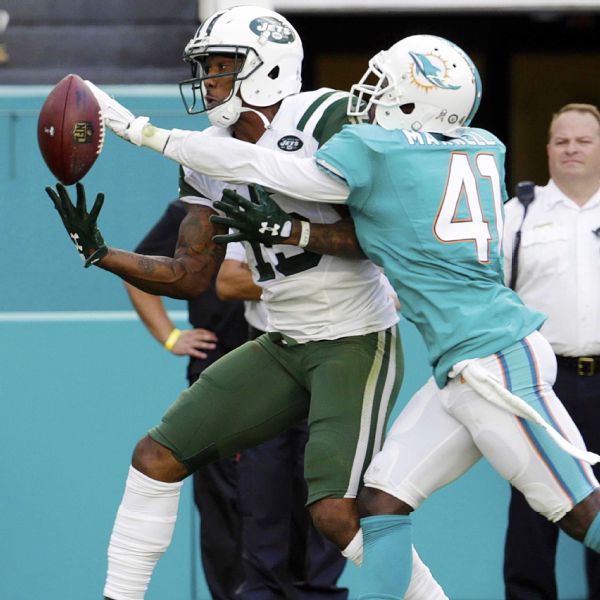 Resuming his rant from six weeks ago, Marshall accused Maxwell of being "the same guy" from their Nov. 6 meeting, meaning a defender who holds "on every single play." Marshall's words sparked a chippy battle in South Florida. On Saturday night, the rivals meet again at MetLife Stadium.

"I think the refs did an amazing job the last time we played them," Marshall said. "I think they threw three, four, five flags, so Saturday night I'll be assisting the refs."

Keeping a straight face, Marshall reached into his locker and pulled out a yellow penalty flag.

"I'll be carrying my own flag just in case he decides to conduct himself the same way," he said, holding up the flag for reporters. "So I will help the refs out, but I thought they did a tremendous job the last time we played them."

When someone joked that carrying a flag might be a uniform violation, Marshall cracked, "It depends. Depends on how Roger [Goodell] wants to play it. I'm just here to help."

Maxwell, told of Marshall's comments in Miami, said:"I guess he probably won't be voting for me for the Pro Bowl [laughs]."

For the record, Maxwell was called for "only" two penalties in that game -- both pass-interference calls, totaling 26 yards. He held Marshall to five catches for 46 yards, and the Dolphins won 27-23.

Maxwell recently called himself one of the best corners in the NFL. Marshall claimed nothing has changed with Maxwell's game.

He quickly corrected himself.

"No, actually, there's been progress," Marshall said. "He went from being the league's top guy in holding, not even close, to just being the top guy in holding. He's made progress. ... He's done a better job of taking it from every play to every other play."

Maxwell isn't the leader in holding penalties, but he's close, according to nflpenalties.com. He has three holding calls; the Bills' Stephon Gilmoreleads with five.

All told, Maxwell has eight penalties, plus two that were declined.

The Marshall-Maxwell feud was sparked during the run-up to the previous game, when Marshall said Maxwell "held on every single play" when they met in 2015. At the time, Maxwell played for the Philadelphia Eagles.

Not surprisingly, they waged a heated battle on Nov. 3, with trash talking and shoving after the whistle on several plays. Marshall said he will have a different approach for the rematch.

"I'm not going to be as hyped," he said. "I'll let the refs do their job. ... I thought the refs did a great job last time. I thought my point was proven. Guys can get hurt when you hold like that. It's not fun. A receiver gets open, and a guy like that holds you.

"That's in the past, but I will assist the refs with my flag, just in case."

Maxwell was asked if there was a growing rivalry between himself and Marshall.

"This is a business. I think it's a business transaction. I'm out here to do a job. He's in the way. It really don't matter to me as long as I do what I gotta do," he said.