Brandon Wimbush's offseason spent in search of a 'fix' for QB 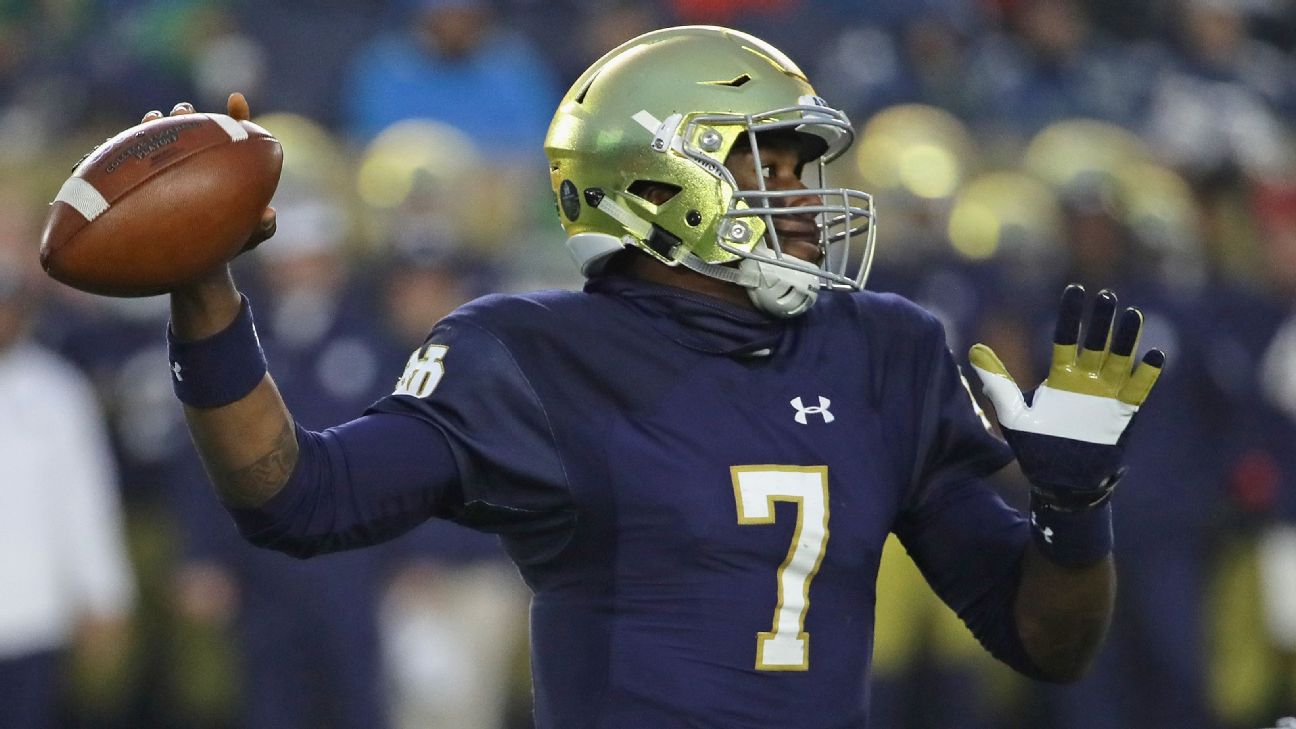 SOUTH BEND, Ind. -- When Taylor Kelly came to Notre Dame this winter to work with Brandon Wimbush, he saw what everyone sees.

Yet something was missing.

Weeks earlier, at the Citrus Bowl, Notre Dame completed a 10-3 season by beating LSU, thanks to an incredible catch by wide receiver Miles Boykin on a ball Wimbush didn't throw. Wimbush started the bowl game -- and 11 other games (he missed one start because of injury) -- but was benched in the second quarter after completing three of eight pass attempts. Although the bowl win capped a restorative season for the Fighting Irish, it also kept a red flag raised over Wimbush. In the final four games, he completed just 33 of 75 passes -- dropping his season percentage to a hair below 50 percent -- and had his only two multi-interception performances. Although he shined as a runner (766 yards, 14 touchdowns), he eclipsed 57 percent completion just once all season.

One way or the other, the offseason would define Wimbush's Notre Dame career. He would do whatever it took to get right.

"When I watched him and talked to him, his whole thing was, 'I know what I'm doing. I just don't know how to fix it. I feel off,'" said Kelly, the former Arizona State quarterback who works as an instructor with 3DQB training, whose clients includeTom Brady and Drew Brees. "But because of his ability to know his body so well -- he separates himself from a lot of guys in college and the NFL in how he's aware of his body and his surroundings -- he's able to adapt very fast."

Kelly's conclusion after several days with Wimbush on campus: "He could fix it immediately."

Wimbush must wait until Sept. 1, when Michigan's ferocious defense visits Notre Dame Stadium, to prove whether the senior is, indeed, fixed. There are no guarantees, but what can't be denied is the way Wimbush has approached his time outside the spotlight, giving himself the best chance to succeed once it shines on him again.

He did so by opening himself to critiques: from Notre Dame's coaches, from coaches back home in New Jersey and from Taylor Kelly, mechanics guru Tom House and the rest of the 3DQB crew. He consulted family, football-playing friends such asMinkah Fitzpatrickand Notre Dame's mental performance coach, among others. Wimbush maintained a fairly tight inner circle but didn't close off avenues of advice.

"I reached out to the right people," Wimbush said. "It wasn't too many, it wasn't too little, and each one of them delivered a different perspective to where I needed to go and what I needed to improve. That helped me fix a lot of the little details I needed to fix."

As last season went on, Notre Dame coach Brian Kelly saw changes in Wimbush's drop and how his lower body moved on passes. Simple throws became complicated, and his habits were difficult to correct during the season.

The fix-it process would be two-pronged: mechanical and mental.

"We had to make it clear that we weren't planning to work with 10 different people," Kelly said. "There only can be a few people in your corner. We said, 'This is how we're going to go to work this year,' and we've stuck with the plan."

Wimbush's mission began soon after the bowl game. He returned home to New Jersey, where he consulted with Madei Williams, a quarterback trainer who has worked with him since eighth grade. They worked on recapturing timing with Wimbush's upper and lower body, as well as creating a compact, balanced throwing motion. They sought more rhythm and less thinking.

Williams, once considered the heir apparent to Donovan McNabb at Syracuse, said once a quarterback starts obsessing about his mechanics on each throw, it becomes "a mental crutch." As he watched Wimbush last fall, he saw a slight regression in mechanics, but more so a player who was thinking too much.

"He was one of the most prolific quarterbacks in the country," said Williams, who saw Wimbush complete 72.3 percent of his passes as a high school senior. "He's always been known as a passer first and an athlete second. Everything is a rhythm, so we went back to what got him there."

Taylor Kelly was up next. Since Notre Dame's coaches couldn't work with Wimbush until spring practice, offensive coordinator Chip Long, who coached at Arizona State while Kelly played there, reached out to the former Sun Devil.

Kelly soon saw that if Wimbush threw 10 comeback routes to the same spot, five or six balls spun to the mark, while the others fluttered and fell short. "He just didn't know how to find that consistent stroke and release point," Kelly said. They worked on creating repeatable throwing techniques under any conditions. In addition to their time at Notre Dame, Wimbush spent part of his spring break with Kelly in Southern California.

"There's a position where you can find every single throw, whether it's a clean pocket or not clean," Kelly said. "How do you find that? The one thing I loved about Brandon is how he was able to pick up on it so fast, the body movement and what he felt, whether it was good rep versus a bad rep, and how he could self-correct it."

Wimbush refined his mental approach with Dr. Amber Selking, a performance consultant who works with Notre Dame's football team. Wimbush learned to understand his power as an athlete and ways to emphasize his strengths. Selking encouraged Wimbush to stay off of social media: "A huge factor in turning around my game," he said of the work he has done this offseason.

"You learn a lot about yourself," Wimbush said of Selking's assistance. "For me, a lot of it was mental, so I needed to get out of my head. She did a good job of helping me through."

Notre Dame's coaches made it clear that if Wimbush didn't improve, he wouldn't start in 2018.Ian Book, who threw the game-winning pass in the bowl game against LSU, is back, and Phil Jurkovec, ESPN's No. 9 passer and 126th overall player in the 2018 class, arrives this summer. But the team wasn't giving up on Wimbush.

Wimbush and Long began meeting more and growing their relationship. "Looking through the same set of eyes," Wimbush said, with both scheme and expectations. Wimbush leans on quarterbacks coach Tom Rees, who, at 26 and just five years removed from being Notre Dame's starting quarterback in Brian Kelly's offense, provides great visual learning for Wimbush by performing the drills he does.

It all translated to improvement by the time spring practices began.

"I hoped he would respond the way he has," Long said. "He's worked extremely hard to get where he is. He's comfortable back there. It's Year 2 [as the starter]. He's still going to have some doubts the first time he goes under those lights, but I don't think you're going to see the peaks and valleys that you saw. Because he knows if that's the case, he's not going to be the quarterback here."

Heather Wimbush has seen her son attack disappointment this way before. After St. Peter's Prep lost to Paramus Catholic in the 2013 state championship, a game Brandon exited in the second quarter with a concussion, he put it on himself to win it all as a senior. The next December, Brandon led St. Peter's past Paramus Catholic for the title.

"He's not a casual guy when it comes to things he has to get done," she said. "It's been that way since he was a young boy. So when he feels he's not performing to a 100 percent standard, it makes him uncomfortable. I'm his mom, I give him advice, but he pretty much mapped out everything. He's figuring out and getting feedback from people who he thinks are going to give him good information. He's willing to learn. The humility is always there. Regardless of what happens, no one is going to say it was for a lack of effort."

She points out the parallels between Brandon's high school and college careers. Brandon didn't play much during his first two years at St. Peter's Prep, tasted both success and failure as a junior and then had major spikes in production and confidence as a senior.

She knows it's different at Notre Dame. There's more pressure. Her son plays one of college football's highest-profile positions. He's seeking redemption on the field while working toward an accounting degree off of it. His plate is full.

"The spotlight is so very, very bright," she said. "You have to wear your warts more boldly than most people. Brandon is used to athletic success, and he spends a lot of time thinking about, 'How do I get back to being a confident Brandon?'"

Confidence is a theme everyone brings up with Wimbush -- more specifically, how he leads and inspires others.

Williams sees a quiet confidence but wants "that dog, that fire" in Wimbush to show up in 2018. Notre Dame linebacker Drue Tranquill saw Wimbush throwing with confidence throughout spring practice, like he did early last season. Long and Brian Kelly see the improvement too, but they want Wimbush to demand more from his teammates, even if it's against his nature.

"He's a guy that handles himself in a manner so positive to the point, maybe, it becomes not as motivating," Kelly said. "There are times you can be positive, you can be demanding, but you also have to tell them what you expect from them. I think he's starting to see that side of leading."

Wimbush thinks a year as the starter has given him equity -- "more of an authoritative demand," he puts it -- to say more to his teammates. He'll never force criticism, but he will speak up at the right moments. When the starting quarterback is so open to feedback, the rest of the team should be too.

After months of assessing everything about his game, Wimbush looks forward to letting loose. Asked what type of player he'll be with refined fundamentals and a free mind, Wimbush allows himself a smile.

"I can be really good," he said. "I can be one of the top quarterbacks in the country. I know I can. When I am just playing, it's fun to watch. The offense is just rolling. That's where I have to be to go where we want to go."
Report a correction or typo
Related topics:
sportsespncollege football schedulebrandon wimbushcollege football previewscorescollege footballheisman watchnotre dame fighting irish2018 college football season
Copyright © 2020 ESPN Internet Ventures. All rights reserved.
More Videos
From CNN Newsource affiliates
TOP STORIES