Broncos banged up in St. Louis 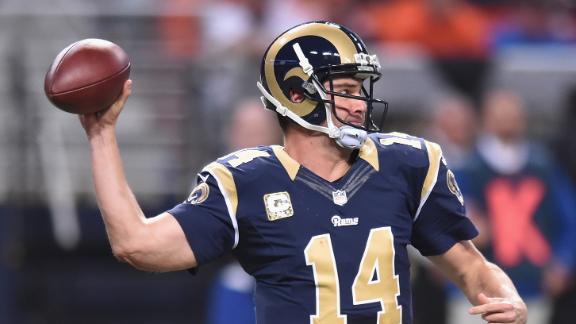 ST. LOUIS -- The Denver Broncos' trip to this city has been a painful one. Tight end Julius Thomas, running back Montee Ball and wide receiver Emmanuel Sanders all suffered injuries in a 22-7 loss to the Rams.

Thomas played just two series for the Broncos before leaving the game with an ankle injury and did not return. He had X-rays on his ankle at the stadium and was diagnosed with a sprain.

Thomas spent most of his first two seasons in the NFL working through ankle troubles, including surgery on his right ankle in 2012, before his breakout season in 2013. The ankle he injured Sunday was not the same ankle he had surgically repaired.

Sanders was hit by Rams safety Rodney McLeod early in the third quarter as Sanders dove for a Manning pass up the Broncos sideline. Sanders remained down on the field for a few moments and was later ruled out for the rest of the game after being taken to the locker room to be evaluated for a concussion.

Thomas currently leads the NFL with 12 touchdown catches, while Sanders left the game having already tallied 102 yards and a touchdown on five receptions.

Despite losing two of his top targets, quarterback Peyton Manning said he has confidence in their replacements even after Sunday's surprising defeat.

"[Andre Caldwell] and Jacob Tamme have made a lot of plays for this offense and I have a lot of confidence in them," Manning said. "I've got to give them the chance to make better plays ... I have all the confidence in the world, in both Bubba and Jacob, but I have to give them a chance to make plays. Certainly you hate to see Julius and Emmanuel injured, but I still don't think that's an excuse."

With Thomas and Sanders out, wide receiver Demaryius Thomas picked up some of the slack, finishing with seven catches for 103 yards.

"You don't want to see those guys out, but we can still move the ball and execute," Thomas said. "It's just up to the rest of us to make plays and move the ball."

Ball, who had missed five games with a right groin injury he suffered Oct. 5 against the Arizona Cardinals, limped off the field early in the second quarter after he tried to catch a pass from Manning. Ball did not return.

Julius Thomas' injury meant, with tight end Virgil Green and running back Ronnie Hillman already out with injuries going into the game, the Broncos had just one tight end -- Tamme -- in the lineup to go with just two running backs.

"It's never good to lose guy," Tamme said. "Bottom line is we have to play better. I got in there and felt ready to go make plays, we've got guys across the board who feel that way."

Rams Take Down Broncos
The Rams picked off Peyton Manning twice en route to a 22-7 victory over the Broncos.

Sunday Double Check: Rams Stun Broncos
Jim Basquil and Eric Allen break down two key plays that helped the Rams get a week 11 win over the Broncos, including a Shaun Hill touchdown strike and a Peyton Manning interception.