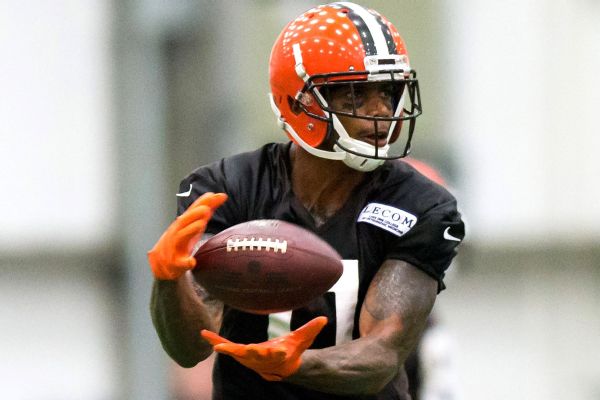 ESPN
By Pat McManamon
BEREA, Ohio - Cleveland Browns receiver Terrelle Pryor said Wednesday he does not believe he crosses the line when it comes to on-field chatter with opponents.

Pryor also said he had no recollection of telling Bengals defensive coordinator Paul Guenther that he would get cornerback Adam Jones cut.

"Some people are storytellers," Pryor said. "I don't know a lot about that."

Jones made that claim about Pryor in a postgame rant following Cincinnati's 23-10 win on Sunday. Jones also said Pryor was arrogant, and called Pryor "garbage," and went so far as to pick up a trash can and mime looking for Pryor.

Asked by reporters about Jones' comments, Pryor initially said he wouldn't get into it. But the more he spoke, the more he talked about Jones and trash talk.

He even said Jones had the right to call him garbage.

"I had one catch, three yards," Pryor said. "I was garbage. He was right. It was an accurate statement."

Pryor was not pleased with reports that said he and quarterback Robert Griffin III were arguing in the huddle when the Browns had to call a third-quarter timeout because the play clock was winding down.

"You guys can't assume, because me and Rob wasn't arguing," Pryor said. "I go and read in the articles you guys are saying that I am arguing with my teammate. That's trying to break up this team and all we're trying to do is come in here and fight for a win.

"I come in here and talk to you guys face to face. I'm very honest with you guys, have fun with you guys, and then you guys paint a picture about me to be a bad person. And try to put some type of stigma between me and my teammates.

"So I appreciate if you guys would stop assuming and get the actual story before you write something."

Griffin also said that he and Pryor were not arguing, but the quarterback added that they can't have the appearance of arguing, which leads to questions.

Monday, coach Hue Jackson said Pryor had to better channel his emotions and passion. Wednesday, Jackson said he had talked with Pryor, and would continue to do so until the talks worked.

Pryor maintained he is not causing any problems.

"You can ask all my teammates. I'm not a guy that causes any beef or drama on the team. That's not me. Am I on the sideline fiery? Am I in the game fiery? Absolutely.

"I want to think that the fans and my coaches or anyone else want me to [play that way]. And if I play it any other way and shut up and didn't do anything, I don't think I'd play as well."

Pryor said he would be steadfast in not talking negatively about other players in the media because he wants to be a role model to the kids who write him and look up to him.

"When I'm in the game, it's different," Pryor said. "I'm in my sanctuary along with all the other players."

He said, though, he does not believe he crosses the line when he's on the field.

"You can't cross the line in terms of that unless you're going to hurt the team with a penalty and stuff like that," Pryor said. "The refs are pretty good at that ... they know if stuff is getting heated up. They'll stop you. As long as you listen to the ref and obey their law, you can keep on going and playing your game. You know, staying in the moment."

Pryor knows that players have called him out after the last two games, first Janoris Jenkins of the Giants via Twitter, then Jones.

"Words don't do anything to me," he said. "I'm a godly man. I just live my life every day being humble and being kind. And I live off of that."
Related topics:
sportsespnhue jacksonjanoris jenkinsterrelle pryoradam jonesnflcleveland browns
Copyright © 2020 ESPN Internet Ventures. All rights reserved.
More Videos
From CNN Newsource affiliates
TOP STORIES