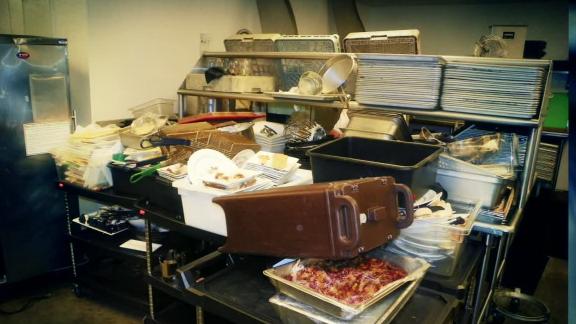 The food safety manager at Kansas City's Kauffman and Arrowhead stadiums, home to the Royals and the Chiefs, told ESPN's "Outside the Lines" that poor food handling and dirty conditions have routinely been putting fans' health at risk -- including during the World Series. In addition, a city health department inspection completed Nov. 3 found dozens of critical health code violations at the facilities, according to documents obtained by "Outside the Lines."

Among the concerns found at the stadiums by the manager: cockroaches in vending areas, mouse feces on the same tray as pizza dough, sinks where employees were supposed to wash their hands being blocked by boxes or trash, employees eating in food prep areas and trays of food headed for customers that measured at unsafe temperatures. The health department found several critical violations, including mold growth in ice machines, dirty pans and trays and excessive numbers of fruit flies.

"When we lose control over hygienic practices and we also combine that with poor temperature control -- that could be a catastrophe," said Jon Costa, the district food safety manager for Aramark, which runs the concessions at both venues and has food and beverage contracts with 30 professional sports teams. "That is a recipe for foodborne illness. ... It's very likely temperatures are abused every game. Every game."

Costa sent information about the food safety concerns to local media and ESPN last week, a step he said he took after months of trying to get Aramark senior management to address his concerns and reprimand employees who broke food handling and prep rules. He said he had no authority to reprimand employees, and he was powerless on site because the employees he would have been instructing did not report to him.After learning that Costa sent those details to the media, Aramark placed him on paid administrative leave last week for violating its media policy, Costa said.

Marc Bruno, chief operating officer of Aramark Sports and Entertainment, said last week that Costa's photographs and descriptions were "just allegations at this point," and the company has addressed problems that Costa has raised throughout his 2 years with the company.

"It's completely contrary to everything that we have done in there," Bruno said. "Food safety is the top priority, No. 1 at Aramark and No. 1 in Kansas City and all our operations." He said both venues are routinely inspected by the City of Kansas City, Missouri, Health Department, which has awarded a number of concession stand food safety excellence awards at the stadiums in the past.

Tod MacKenzie, senior vice president of communications and public affairs for Aramark, also wrote a detailed response to "Outside the Lines."

"The unsubstantiated claims raised by a disgruntled employee are very troubling, as is his unknown motivation," MacKenzie said. "Especially disturbing is the fact that this individual is personally responsible and entrusted with managing food safety at the locations in question. ...

"The random collection of isolated and questionable photographs that the employee distributed represents selective snapshot 'moments-in-time' that without proper context can support any number of conclusions."

The Royals issued a statement, saying: "We take great pride in promoting an atmosphere at Kauffman Stadium that Royals fans of all ages can enjoy. The excitement and energy running through the stadium was on full display during the World Series and our partners, including Aramark, play an important role in creating those memories. Food and beverage is integral to the fan experience and Aramark has been a valued partner in delivering those services to fans. We all take food service, safety and quality very seriously."

The Chiefs also issued a statement: "We're continually looking for new ways to enhance the fan experience and, for the past four seasons, we have partnered with Aramark to transform and elevate our general concession areas. The food and beverage service and selections delivered by Aramark are important parts of the Arrowhead experience."

In July 2010, "Outside the Lines" conducted a comprehensive review of food safety at all 107 venues for professional football, hockey, baseball and basketball in North America. In that report, 62 percent of Kauffman's vendors had critical violations, and at Arrowhead, it was 56 percent. Aramark began its contracts with Kauffman in 2007 and started one with Arrowhead, for general concessions only, in 2010. Costa said his position was created as a result of the "Outside the Lines" report.

"Some of these practices are very habitual. And sometimes it's the same abuser," Costa said of the problems he witnessed.

Costa sent photos of food prep problems to Aramark and Royals officials, via emails, prior to the World Series. "Outside the Lines" verified those emails.

Costa also emailed his photos and complaint to the health department on Nov. 3, the day after the Chiefs played the Jets at Arrowhead, and the department sent inspectors within hours to examine concession stands at both venues. Even though there were no events at either facility that day and the stands were closed, inspectors found violations at 20 out of 26 stands, including 37 critical violations.

Health department division manager Naser Jouhari said the results were "shocking." He said his inspectors told him that it looked like Aramark workers "just flipped the switch off, and they walked out without doing any cleaning or removing any of the food items."

"The main concern is [inviting] all these insects and rodents to the concession stands so they [could] contaminate food service, food contact areas," he said.

Although no events are scheduled at Kauffman until March, the Chiefs have their next game at Arrowhead on Sunday. Bruno said Aramark has addressed and corrected all issues from the Nov. 3 health department inspections and has brought in a third-party food safety auditor. On Monday, health department inspectors re-inspected the 20 stands that had violations and reported that all of them had been corrected. Had they not been, the department could have shut down the noncompliant concession stands, issued a fine or done both.

"We've served 3 million or 4 million fans this summer in Kansas City at those two stadiums," Bruno said. "And the food is safe, the food is high quality, and there are really no issues."

Costa's photos also included shots of moldy hot dog buns, which he said were discarded but had been a recurring problem. He provided a copy of an email from May 5, 2014, from a Royals fan who complained about mold on a hot dog bun that the fan's child was about to eat.

Costa said managers have not been promoting food safety, especially among the food prep workers who actually handle the ingredients, as evidenced by a scene he described from the final game of the World Series on Oct. 29. The concession stands were running low on pizza dough, and a prep worker told him that she was left with a tray of dough that had expired Oct. 25.

"Outside the Lines" heard two other accounts of the dough incident that backed up Costa's description and indicated that pizzas made with expired dough were sold to customers.

Even if the dough didn't pose a health hazard or sicken anyone, Costa said it set a bad precedent for workers.

"I think it says that, 'Hey, we can sell any substandard food that we want,'" he said.

Costa provided a copy of an email his supervisor in Kansas City sent Oct. 31 stating that the supervisor was concerned about the dough incident and that another manager that night did eventually instruct workers to stop selling the pizzas. When "Outside the Lines" asked Bruno about the incident last week, he said it was the first he'd heard of it.

"I continue to have confidence in our policies and procedures that would prevent something like this from being served," he said. "I was at Game 7. I actually did have pizza that night, and you know, there were no issues that we're aware of anywhere."

Health department inspection photographsThe City of Kansas City Health Department sent inspectors to Arrowhead and Kauffman stadiums on Nov. 3, the day it had been alerted to food safety concerns by Costa. Even though there were no events at either facility that day and the concession stands were closed, inspectors found violations at 20 out of 26 stands, including 37 critical violations. The photos below were taken on Nov. 3. The facilities passed a re-inspection this week. 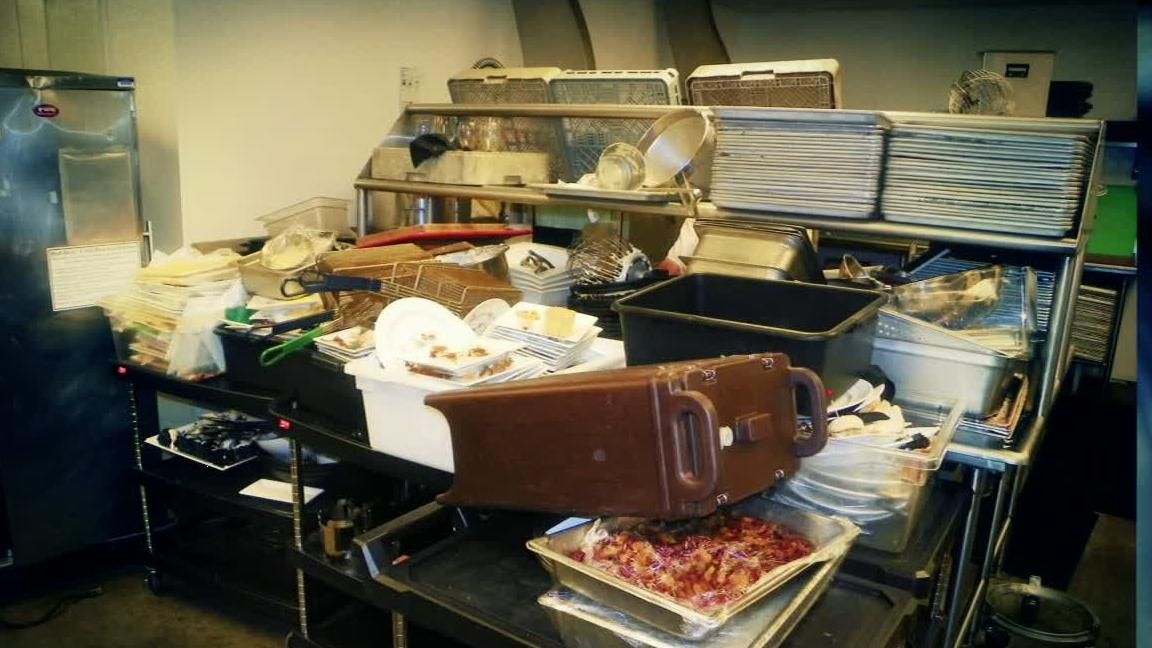