Bulls still dealing with injuries as they face Wolves 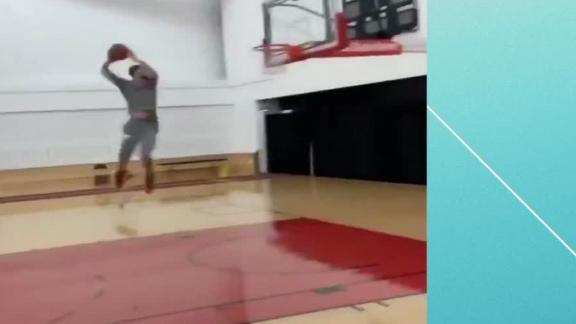 "Full strength" is a status Chicago hasn't attained much this season, and with various long-term injuries still nagging the team, it isn't one the Bulls will experience completely down the stretch.

Still, the team continues to gain confidence as more players return to health entering Wednesday's visit to the Minnesota Timberwolves, and that's never a bad thing.

Monday brought the first appearance for the Bulls' Otto Porter Jr. since Nov. 6, as the 6-foot-8 forward came back from an extended absence with a broken left foot. Porter scored 18 points in 17 minutes in a 109-107 home victory against the Dallas Mavericks and further delivered the team's mantra for the final six weeks of the season following the game.

"Just stay healthy and get some wins," Porter said.

Despite slim hopes for sneaking into the Eastern Conference postseason, the Bulls aren't resorting to scoreboard watching just yet.

"We're not thinking about the playoffs right now," Porter said. "We're just trying to get guys back. When it gets down to it where we're going to need a couple games, then we'll get in that playoff mode to where everything is very detailed."

Denzel Valentine, who returned Saturday following a seven-game absence with hamstring issues, started in place of LaVine and scored a season-high 17 points. Valentine has been healthy for much of the season apart from that stretch but still struggled to cement himself in coach Jim Boylen's rotation.

Chicago has lost 10 of 12, and its victory against Dallas was only the team's second triumph over a team with a winning record this season.

Minnesota has lost seven of nine but snapped a two-game skid with Tuesday's 139-134 victory at New Orleans. Malik Beasley scored 28 points on 11-for-13 points to pace Minnesota.

"Malik Beasley, he was huge for us. He let the game come to him, and he made big plays down the stretch," said Minnesota guard D'Angelo Russell, who added 23 points.

All five starters finished in double figures, while three reserves had double-digit scoring games as well.

Wednesday marks the beginning of a three-game homestand for the Timberwolves, who have just seven home wins this season.

Bulls forward Lauri Markkanen practiced with G-League affiliate Windy City on Monday and is nearing a return from a right hip injury, Boylen said. Markkanen has been out since Jan. 22.

Chicago defeated Minnesota 117-110 at United Center in the teams' first meeting this season as LaVine scored 25 points against his former team. The Bulls lead the all-time series 33-25 but have lost four straight to the Timberwolves on the road.