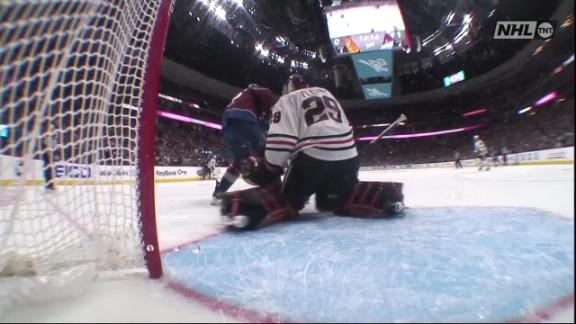 DENVER -- - The veteran defenseman got Colorado started, the 20-year-old rookie chipped in with a milestone goal and the Avalanche began their Stanley Cup quest with a victory.

Bowen Byram, Colorado's youngest player at 20 years, 4 months, scored his first NHL goal and added an assist, and 34-year-old Jack Johnson also scored to lead the short-handed Avalanche over the Chicago Blackhawks 4-2 in the season opener for both teams Wednesday night.


Johnson, who is 8 days older than teammate Darren Helm, made the team on a professional tryout and made an immediate impact with the first goal of the game.

Nazem Kadri and Gabriel Landeskog each had a goal and an assist for Colorado, which played without star center Nathan MacKinnon and head coach Jared Bednar. Both are in the COVID-19 protocol and away from the club.

"We've been able to stay in contact with Jared, and he's done some video work," Bennett said. "It's just a question of taking Jared's responsibilities and splitting them between Nolan and I."

Kuemper, acquired from Arizona in the offseason, wasn't tested early but made two big saves on Kirby Dach in the second period. Dach had a breakaway at 12:02, but Kuemper closed the pads on his shot. Minutes later, Dach had another wide-open chance from the left circle that Kuemper stopped.

"If I score those it might be a different game," Dach said. "That's on me. It's been a problem of mine for the past couple of years...so I've got to figure something out and start scoring goals."

Colorado got a measure of revenge against Chicago goaltender Marc-Andre Fleury, who helped Vegas beat the Avalanche in the second round of the 2020-21 playoffs. Fleury faced a barrage of pucks early as Colorado had 17 of the first 19 shots on goal.

Johnson opened the scoring at 4:26 of the first period. Landeskog's deflection 1:22 later made it 2-0, and Byram scored at 9:34 to put the Avalanche ahead by three.

"It's something you dream about for a long time - and also nice to get out of the way, get the pressure off," said Byram, born four days after Colorado won the 2001 Stanley Cup.

The Blackhawks got on the board late in the first period when forward Dominik Kubalik scored on the power play at 16:47, cutting the Avalanche's lead to 3-1.

Connor Murphy scored an unassisted goal at 15:13 of the third period. Chicago went on the power play at 16:26 and pulled Fleury for a 6-on-4 advantage, but couldn't score.

"We got better as the game went on, but it's hard to dig yourselves out of a hole," Blackhawks coach Jeremy Colliton said. "We need to be better. We will be better. We've got good players and the stuff that happened is very correctable."

Colorado is hopeful MacKinnon and Bednar can return for Saturday night's game. Both are asymptomatic and could "test out," according to general manager Joe Sakic.

Game notes
Avalanche forward Jayson Megna was recalled from the AHL to fill MacKinnon's spot. He centered the fourth line. ... Chicago C Jonathan Toews played his first game since before the pandemic. He opted out of last season after being diagnosed with chronic immune response syndrome. ... Colorado is 17-6-3 in home openers since moving to Denver in 1995.

Blackhawks: At the New Jersey Devils on Friday night.