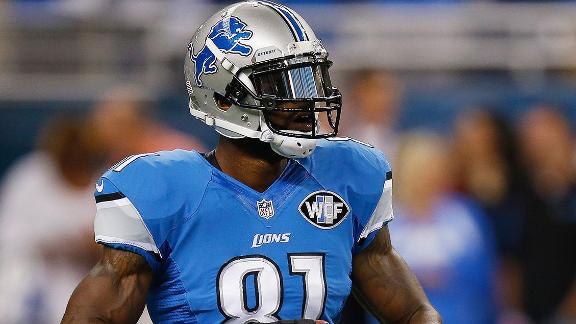 ESPN
By Michael Rothstein
ALLEN PARK, Mich. -- Calvin Johnson said he will need rest and treatment to recover from the high right ankle sprain he suffered against Green Bay last month and aggravated on Sunday against the Buffalo Bills.

"Takes some time to rest and get off your feet as well."

Detroit Lionscoach Jim Caldwell said he would "strongly" consider sitting Johnson this week against Minnesota in an attempt to get his star wide receiver healthy. Johnson missed his third straight Wednesday practice. He was one of four Lions who was not out there, including running back Reggie Bush, who is also dealing with an ankle injury.

On Wednesday, Caldwell said the Lions will go through the week and "we'll see" when it comes to a determination on whether Johnson would play. Caldwell, as he has done in the past, cited Johnson's ability to heal quickly as a reason he wants to see how it goes throughout the week.

"It's one of those deals where we take it week by week," Caldwell said. "He's a veteran. He knows his body better than anyone, and the doctors will confer and kind of give us their prognosis."

Johnson said one of the worst parts about the injury is when he plants his foot in the ground. That, he said, is when the pain comes. He said he will work with the training staff and coaches to determine his status.

He wouldn't say, though, that it would be the best thing for him to sit for a week to be healthy, but that they are trying to be intelligent about his decision. In five games, he has 22 catches for 348 yards and two touchdowns.

In the preseason, to keep Johnson healthy, Caldwell kept him out of three of the four preseason games to protect the wide receiver. Now, though, games count. But being smart still appears to be the course of action the Lions will take to ensure he is around for the Lions in the long term.

"You want to be smart," Johnson said. "You don't want to put yourself in a position where you can't be there for the team when it comes down to the end. That's what we're trying to be smart about right now."

Johnson has played with the injury the past two weeks. He said he felt better last week entering the Buffalo game compared to the Jets game. However, he wouldn't give a better-or-worse prognosis this week, saying "it's hard to compare."

He did say, though, he wouldn't be surprised if defensive players targeted the ankle to try to take Johnson out of the game.

"I wouldn't doubt it," Johnson said. "Guys try to take you out of the game if they know they can. So especially if you've got a playmaker, guys on the defense would do that."

Lions May Sit Megatron
Michael Rothstein discusses why the Lions are considering keeping wide receiver Calvin Johnson off the field this week against Minnesota.