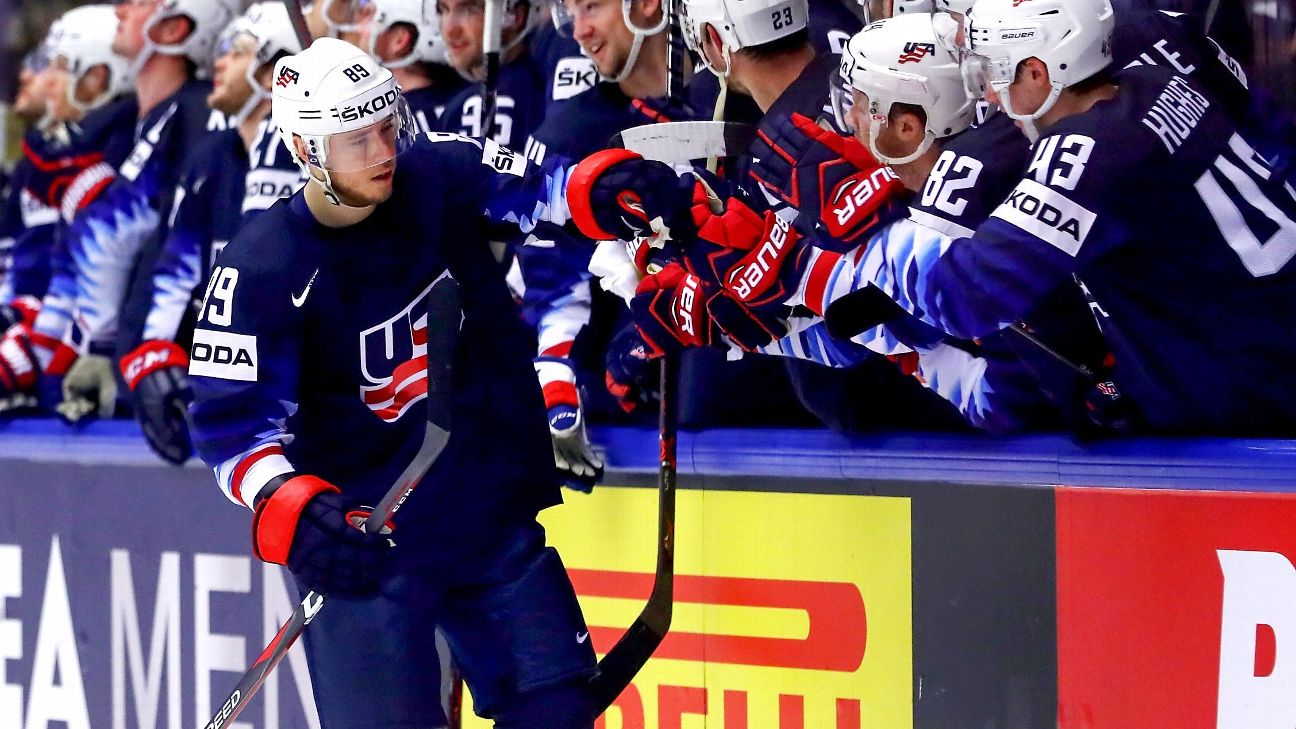 HERNING, Denmark -- Captain Connor McDavid scored a hat trick to lead Canada to a 5-0 win over Norway on Thursday at the ice hockey world championship, while the Czech Republic beat Russia 4-3 in overtime.

Earlier Thursday, Cam Atkinson scored in overtime to give the United States a 3-2 win over Latvia, its fourth straight victory at the tournament.

In another tight game, Slovakia kept its hopes alive for a quarterfinal spot by topping France 3-1, with Michal Cajkovsky scoring the final goal into an empty net.

Bo Horvat scored the other two goals for Canada while goaltender Curtis McElhinney only needed to make nine saves for the shutout.

"We came out and did what we had to again," McDavid said. "I think we've got a lot better as the tournament's going on here. We understand what this tournament is about. We have to win all games."

After clinching his second consecutive Art Ross Trophy as the NHL's leading scorer with 108 points, McDavid has four goals and six assists from four games at the championship.

Boston Bruins forwards David Pastrnak and David Krejci only joined the Czech team only on Thursday morning after being knocked out of the NHL playoffs by the Tampa Bay Lightning and immediately made their presence felt.

Pastrnak scored two goals, including the winner with 1:37 left in overtime, and added one assist while Krejci finished with a goal and three assists.

Nikita Nesterov, Mikhail Grigorenko and Alexander Barabanov scored a goal each for Russia, which had shut out its previous three opponents.

The Americans also won after Atkinson scored his third goal in the tournament 1:23 into overtime on a power play

"It's obviously nice to get that goal," Atkinson said. "It wasn't our prettiest by no means, got to give credit to them. They fought from the start all over to the end," he said. "We took the points but we need to be a lot of better."

Chris Kreider gave the U.S. a 1-0 lead when he knocked in a loose puck on a power play, but Latvia defenseman Uvis Balinskis ended goalie Keith Kinkaid's bid for a third straight shutout with a deflected shot with 2:03 remaining in the first period.

Latvia then went ahead in the middle period through Andris Dzerins, but Colin White tied it for the U.S. with a slap shot that went between the pads of goalie Elvis Merzlikins.

Kinkaid made several key stops in the third period and finished with 17 saves in the game.

"I was just trying to keep my team even at 2-2 and they did the rest," Kinkaid said. "It took the overtime period to do it but we've got the win."

The U.S. and Canada top Group B in Herning with 10 points followed by Finland on nine. Latvia has six points and Norway three.