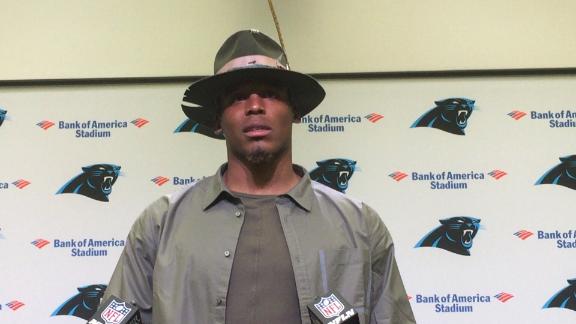 CHARLOTTE, N.C. -- Carolina Panthers quarterback Cam Newton is satisfied he made his point to NFL commissioner Roger Goodell about not being treated fairly in the pocket.

"It was a great discussion, great talk," Newton said Wednesday, a day after he talked to Goodell by phone. "I got my point across. He got his point across. That's it."

Newton complained after Sunday's 30-20 victory over Arizona that he wasn't getting the same treatment as other quarterbacks regarding late hits in the pocket.

The NFL MVP said the breaking point was a non-call on a hit below the knees in the third quarter that the league has since admitted should have been a penalty, sources told ESPN's Ed Werder.

Newton said after the game that he felt unsafe in the pocket and wanted to speak with Goodell. That happened Tuesday.

"Illegal hits for me start in the pocket," Newton said. "I know when I am running the football, I am on my own. I understand that. I'm not a dummy or oblivious to the fact that I run the football more than any quarterback who has ever played this game. I mean, duh. I'm fine with that.

"In the pocket, that's all I'm asking for. Just to get certain things, the standard of every person getting the same calls, that's all."

The opposition has not been penalized for roughing the passer against Newton since the 2014 season, even though Newton has been hit 59 times inside the pocket -- the ninth-highest total in the league. One was called in the season opener against Denver but negated by an intentional grounding penalty.

That was one of Newton's points to Goodell. Said Newton on whether things will change: "We'll wait to see Sunday and moving forward."

Panthers coach Ron Rivera, who spoke to Goodell on Monday, echoed that only time will tell whether officials do more to protect his franchise quarterback.

"The nice part was the commissioner was a willing listener," Rivera said. "It was great. The nice thing is we had an opportunity that needed to be said.

"At the end of the day, it's not about special treatment. It's about being treated the same."

Newton said his focus now is helping the Panthers (2-5) prepare for Sunday's game at Los Angeles.

"I'm not talking about Roger Goodell no more," he said. "I understand that was probably a lot of attention in the media this past couple of days. As far as right now, I'm in straight preparation for the Los Angeles Rams."