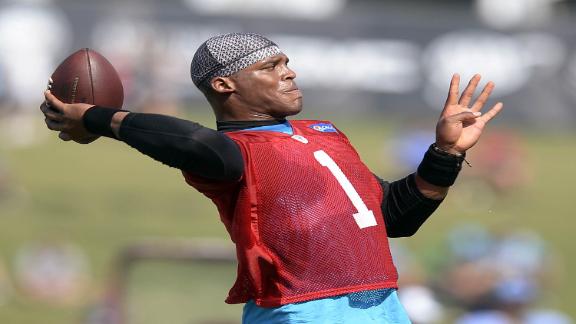 Newton, who did not play in Friday night's 20-18 loss to Buffalo as he continued to rehabilitate the left ankle that underwent surgery in March, also was given clearance for Sunday's practice to run the read option for the first time in training camp.

"Cam is on track to do the things we need him to do now,'' coach Ron Rivera said after practicing in a steady rain at Wofford College. "We've mapped out a lot of things. We're now getting to the point where the work load is going to increase and things are going to change and we're going to do things differently now.''

Rivera said running back Jonathan Stewart (hamstring), who practiced for the first time in camp, and backfield mate DeAngelo Williams also would play against the Chiefs. Williams, 31, was held out of the preseason opener to give him a rest.

Newton's return to full practice comes at a good time for a Carolina offense that struggled against Buffalo's first team.

Thus far in practice Newton has been limited to handoffs and passing, with third-stringer Joe Webb taking all of the first-team snaps on the read-option.

Newton also was not allowed to scramble or ad-lib, a big part of his game.

On Sunday, he did both, tucking the ball on a read option early in team drills and making a nice run to the right side. He later tucked the ball and ran near the goal line when a receiver wasn't open, although the defense didn't make much of an effort to stop him and the practice was not in pads.

Newton rushed for 585 yards last season and has 2,032 yards rushing in his first three seasons.

The team will be in full pads on Monday and Tuesday before breaking camp and returning to Charlotte, North Carolina. Rivera said there will be no limits on Newton.

Rivera added that Newton and the rest of the starters likely will play longer than normal for a second preseason game because they play on the road against New England five days later.

He said the starters may go less in the third game, typically when they get their most extensive work.

"I'd hate to play half a game [against Kansas City] and then, bam, on a short week we're traveling on Thursday, playing on Friday and expect the guys to play [well],'' Rivera said. "So we may play them a little bit longer than you normally would in the second game and not quite as long in the third game.''

Newton Cleared To Play
ESPN.com Panthers reporter David Newton discusses how much Cam Newton is expected to play in the Panthers' next preseason game against the Chiefs.

First To Worst?
Stephen A. Smith and Skip Bayless debate why the Panthers are the team most likely to go from first to worst.