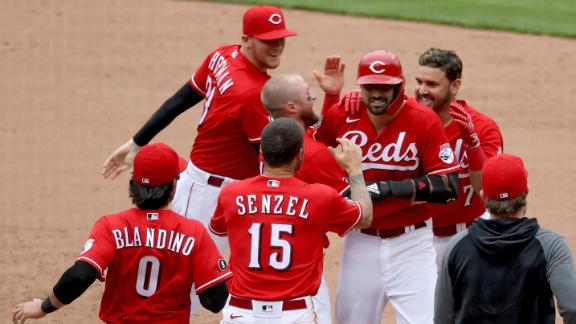 CINCINNATI -- - Nick Castellanos hit a game-ending RBI single in the 10th inning, lifting the Cincinnati Reds to a wild 13-12 victory over the Chicago Cubs on Sunday.

Jesse Winker began the Cincinnati 10th on second and advanced on Willson Contreras' passed ball. Castellanos then cleared a five-man infield when he poked a liner into center field against Craig Kimbrel (0-1).


"It is always great to win a game like that," Reds manager David Bell said. "Even when you don't know how it is going to turn out, it is fun to watch two good teams going at it. It is easy to feel that way when you win, but you have to enjoy a game like this."

Cincinnati bounced back after losing 3-2 on Saturday, taking the rubber game of the weekend set.

"It was huge," Castellanos said. "Each team takes one big swing after another. I was frustrated with the way the game ended yesterday. I was glad to have another chance."

"It was just a great game," Bryant said. "I know we didn't win, but if you're a fan going to a ballgame, that's what you want to see - 10 home runs, lots of action, some great plays, lead changes. It was a great game. We didn't win, but they're out there to beat us, too. Overall, I think it's a positive step going forward. It was fun for the fans to see that offense."

The Cubs trailed 12-8 before scoring four times with two out in the eighth. Jake Marisnick singled in Jason Heyward before Happ belted a three-run drive off Tejay Antone.


Cubs righty Trevor Williams permitted a season-high four walks in a season-low 2 2/3 innings. He was charged with six runs and six hits.

Chicago grabbed a 4-2 lead on solo homers by Bryant and Rizzo in the third. Cincinnati responded with four runs in the bottom half, showing off its power.

First, Castellanos connected for a tying two-run shot. After Joey Votto bounced to third for the second out, Moustakas and Suárez hit back-to-back homers.

Wolters originally was called safe on his second-inning steal of home as Barnhart threw back to the pitcher, but the call was reversed after a 2-minute, 10-second review. It appeared that Wolters' foot was in the air over the plate when Barnhart applied the tag.

Chicago right-hander Keegan Thompson, who was promoted from the team's alternate site on Saturday, pitched a scoreless inning in his major league debut.


Suárez, mired in a season-long slump, set season highs with three hits and three RBI, boosting his batting average from .125 to .149.

Cubs: 2B Nico Hoerner and Happ collided in short center field chasing Tyler Stephenson's pop fly in the eighth inning. Hoerner kneed Happ in the head, and Happ lay on the ground for several minutes before being taken off the field while sitting on a cart.

Reds: LF Winker, back in the lineup after leaving Friday's game in the seventh inning and missing Saturday's game with back spasms, was hit by a pitch on his padded right elbow in the sixth. He stayed in the game.

Castellanos caps 5-hit, 2-HR game with walk-off in extras
Nick Castellanos does it all vs. the Cubs, going 5-for-6 at the plate with 2 homers, 4 RBIs and a walk-off single in the 11th inning.
Report a correction or typo
Related topics:
sportsespncincinnati redsmlbchicago cubs
Copyright © 2021 ESPN Internet Ventures. All rights reserved.
More Videos
From CNN Newsource affiliates
TOP STORIES