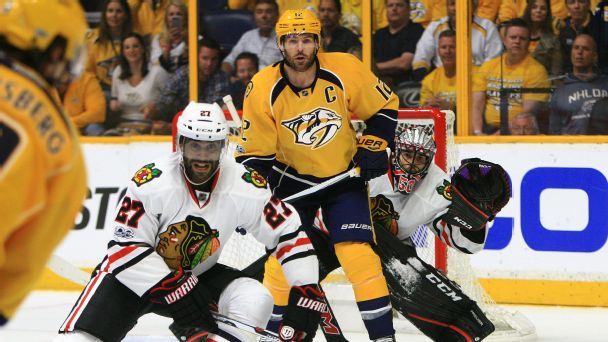 ESPN
By Andrew Knoll
The Chicago Blackhawks won the Central Division last season, only to be swept in the first round by the Nashville Predators. That propelled the Preds from a 16th-seeded squad to a Stanley Cup finalist. Meanwhile, the St. Louis Blues look to retool on the fly after handing the Minnesota Wild a first-round upset loss. (Free agents are unrestricted unless noted as restricted free agents.)

Needs: The Blackhawks made big changes following their premature exit from the playoffs. They still need to strengthen their defense, but a challenging salary-cap predicament must be resolved first.

Cap space:$3 million over the cap

Needs: Everything. Colorado was abysmal last season. Its 48 points was the lowest total since the NHL implemented the salary cap and eliminated tie games in 2005-06. Other than centerNathan MacKinnon, everyone on the Avs' roster is on the market. The price on attractive commodities such as centerMatt Duchene and left wingerGabriel Landeskog has been prohibitively high, however.

Needs: Fans usually reserve chants of "de-fense!" this loud for basketball games. The Stars traded for stay-at-home defenseman Marc Methot. Julius Honka, an offensive-minded blueliner, heads their prospects list. Sharp, Hudler and Hemsky all dealt with serious injuries last season, so the Stars might try to get younger behind their core forwards.

Big moves so far: Dallas landed goalie Ben Bishop and signed him to a six-year deal. The Stars had been overinvested in two underperforming netminders, the since-bought-out Antti Niemi and the pricy Kari Lehtonen. Dallas also brought back Ken Hitchcock, who coached Dallas to its only Stanley Cup, in 1999.

Needs: Trade-deadline acquisition Hanzal appears headed elsewhere, but Granlund and Niederreiter will likely stay on with a deep Minnesota club. Barring a bold trade, the Wild will use their cap space to retain players and reshape their supporting cast.

Big moves so far: Minnesota parted ways with a solid prospect in forwardAlex Tuch and restricted free agent forward Erik Haula in order to keep Vegas away from its unprotected standouts in the expansion draft.

Needs: This team needs scoring, both keeping it and adding more of it. Long-term deals for their top point producer, Johansen, and leading goal scorer, Arvidsson, are musts. A replacement for wingerJames Neal-- who was lost in the expansion draft -- and an additional offensive threat would be compelling additions to the Western Conference champions.

Big moves so far: The Preds lost Neal in the expansion draft but had a subtle but shrewd entry draft.

Needs: The Blues have sustained the losses of T.J. Oshie, David Backes and Kevin Shattenkirk recently without losing much ground in the standings. St. Louis has no glaring positional need, enabling it to pursue a free agent or two based on quality rather than necessity.

Big moves so far: The Blues acquired Brayden Schenn via trade from the Philadelphia Flyers. Schenn can play center or wing, and he scored 51 goals over the past two seasons. St. Louis traded away centerJori Lehtera and right wingerRyan Reaves on draft day when it added multiple intriguing prospects.

Needs: With few free agents, the Jets can make strides toward improving defensively. Winnipeg surrendered more than three goals a game last season as its banged-up defense and subpar trio of goalies struggled. The Jets might look for a mobile, two-way defender and a concrete No. 1 netminder, though they might not quite spend up to the cap ceiling.