Charles Tillman: Luke Kuechly is 'same if not better' than Brian Urlacher 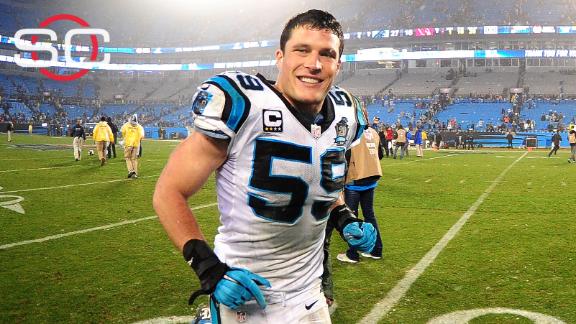 He's been with Carolina Panthers middle linebacker Luke Kuechly for about four months.

When asked on Thursday to compare the two, Tillman said Kuechly was the "same if not better" than the eight-time Pro Bowl selection.

This isn't the first time Kuechly's name has been mentioned in the same breath as Urlacher's. ESPN Monday Night Football analyst and former NFL coach Jon Gruden compared the former Boston College star to Urlacher during the 2014 preseason.

He said Kuechly was the best linebacker in football, also using former Baltimore Ravens star Ray Lewis in comparing the 2013 NFL Defensive Player of the Year to the all-time greats.

But Tillman played with Urlacher at his best in 2005, when Urlacher was the NFL's Defensive Player of the Year.

"Brian was really great in his prime," the 34-year-old Tillman said. "Father Time catches up to us all. Right now Luke is very young, very active and very explosive. He has a lot of power and speed and reminds me a lot of Brian back in the '03, '04, '05 and '06 era."

Statistically, Urlacher's big edge on Kuechly is in sacks. He had six in 2005 and 41.5 for his career. Kuechly has six in three years.

Tillman said the opportunity to play alongside Kuechly on what has been a top-10 defense the past three seasons was one of the things that attracted him to Carolina during free agency.

"I saw them on film and in the playoffs and it drew me in," he said. "I wanted be a part of this defense. There is something special here. We are still forming and creating our identity, but I want to be a part of it."