Chase Headley a priority for Yanks 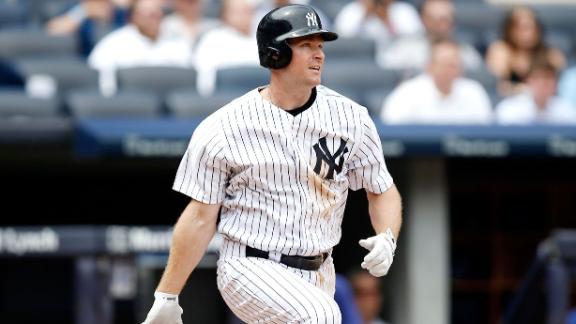 NEW YORK -- The Yankees are making a strong push to sign free-agent infielder Chase Headley because they thinkAlex Rodriguez will be unable to play third base on an everyday basis when he returns in 2015, a source told ESPNNewYork.com.

According to the source, a baseball executive who requested anonymity because he is not involved in the negotiations, doubts among the Yankees' "baseball people"about the ability of Rodriguez -- who will not have played in a major league game in more than 18 months and will turn 40 on July 27 -- to play third base regularly next season have made signing Headley a priority this winter.Headley played in 58 games for the Yankees in 2014 after being acquired in a midseason trade.

The source said the Yankees "are looking at Headley to start at third, play some DH and back up [the oft-injured] Mark Teixeira at first base."

Headley earned $10.525 million on a one-year deal signed before the 2014 season with the San Diego Padres, for whom he had played his previous seven major league seasons. He batted .262 with six home runs and 17 RBIs for the Yankees.

The source said the Yankees' concerns in regard to Rodriguez had nothing to do with the recent revelations that he had paid nearly $1 million to his cousin, Yuri Sucart, in exchange for his silence about Rodriguez's PEDs usage, nor that Rodriguez was reportedly cooperating with the government in its criminal case against Sucart in connection with the Biogenesis doping scandal.

"He's going to be 40 years old and he's had a really tough time staying on the field the past couple of seasons," the source said. "He's had two hip operations and a knee operation, and a lot of baseball people in the Yankees organization have concerns about how much he can give them at this age."

Last month, Yankees general manager Brian Cashman said manager Joe Girardi had discussed with Rodriguez the possibility of him taking ground balls at first base for a possible position switch. According to Cashman, Rodriguez -- who is under contract to the Yankees for three more seasons and is owed a minimum of $61 million -- has met with team trainers and is working hard for his return.

But doubts persist that Rodriguez will be able to contribute much this season.

"Because of his health," the source said, "the question is, will he even make it out of spring training?"

Cashman is at the GM meetings in Phoenix and could not immediately be reached for comment.