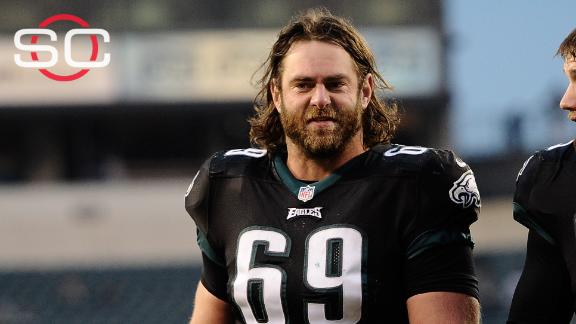 Later Tuesday, Mathis told CSNPhilly.com that he did ask for his release in March before the start of free agency but hadn't made such a request since. He also said he would have been willing to play this season for what he was scheduled to be paid.

"Yes, I would have played under the contract and been fine -- like last year," Mathis told CSNPhilly.com. "I can block stuff out and not let it be a distraction. I missed voluntary stuff, but I was still working hard. It doesn't mean I was going to be a bad apple. I would never do that."

Mathis said several teams have showed interest in signing him since his release, adding that "it's not my choice that I was cut the way I was."

Kelly released Mathis after a second offseason spent in dispute about his contract. The Eagles signed Mathis to a five-year, $25.5 million deal in 2012. After making the Pro Bowl in 2013, Mathis asked to renegotiate the contract. The Eagles gave him and Rosenhaus permission to pursue a possible trade. Kelly said the Eagles never received a trade offer.

This offseason, Mathis skipped the Eagles' OTAs and voluntary workouts. He indicated he planned to report for this week's mandatory camp, but he was released before he could.

Kelly was asked why the Eagles didn't just insist that Mathis honor his contract. By releasing him, there's the possibility they set a precedent for other players who are unhappy with the terms of their contracts. "That conversation had gone on for a long time," Kelly said. "It wasn't addressed to us that it was going to happen. They obviously wanted a new contract, we weren't going to give him a new contract. They asked for a release so we released him."

Kelly said Tuesday that he likes Mathis and wishes him well.

"He didn't want to be here," he said. "I wanted him to get whatever he could get. I hope it works out for him. He was great for us the two years that we had him. I like Evan a lot. If he wants to get released to see if he can get what he can get better, then we released him."

"We obviously are down a good football player," Kelly said of the two-time Pro Bowler. "We're confident in the guys that we have. That's why we made the decision we made. Allen Barbre is an outstanding football player."