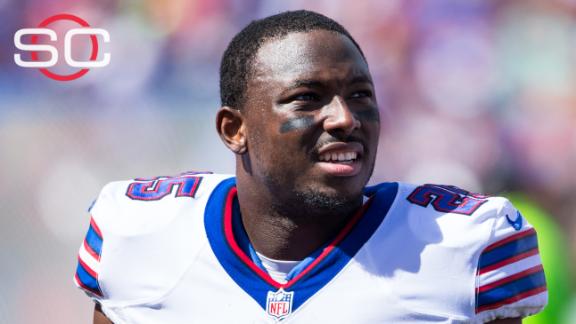 PHILADELPHIA -- Chip Kelly has running backs on his mind, and for good reason.

His current back, DeMarco Murray, is "frustrated" after carrying the ball just eight times in the Eagles' victory over the New England Patriots on Sunday. Murray sat with team owner Jeff Lurie on the charter flight home and discussed the situation.

Meanwhile, his former running back, LeSean McCoy, is set to visit Philadelphia this weekend with his new team, the Buffalo Bills.

In March, Kelly traded McCoy to Buffalo for linebacker Kiko Alonso. He then signed Murray, the NFL's leading rusher last season, to a five-year, $40-million contract. McCoy made headlines by saying that race played a role in Kelly's personnel decisions.

"I have no problem with LeSean," Kelly said in a conference call with Buffalo media Wednesday. "I think the world of him. I think he was a great player here. I really enjoyed coaching him, and I've got great respect for him."

Kelly acknowledged the trade was mishandled. News of it leaked out before the Eagles informed McCoy. After that, McCoy declined to take or return Kelly's phone calls.

"I didn't get a chance to call him," Kelly said. "I know the story came out before the trade was official. And I did try to call him, and he didn't answer my call because the story was probably out. ... And then all the sudden every newspaper report was out there that LeSean was gone.

"And I'm sure he felt bad that I didn't get a chance to call him. But the trade wasn't initiated when the story got out. I just think that how it was handled wasn't the way it should've been handled."

In Philadelphia, Kelly has been handling another running back crisis. He disputed an ESPN report that Murray had a "meeting" with Lurie.

Kelly acknowledged that Murray was frustrated after playing on only 14 offensive plays Sunday.

"He's frustrated because he didn't get the ball on Sunday," Kelly said. "Most running backs are frustrated from that aspect. He's not frustrated that we beat the New England Patriots and we had a big win in New England.

Murray led the NFL with 1,845 rushing yards last season for the Dallas Cowboys. This season he has 569 yards on 163 carries. At that rate, Murray would finish with just 776 rushing yards.

Kelly said there were several reasons for that: offensive line injuries, the difference in offensive personnel and so on.

"We've had different moving parts," Kelly said. "We're not exactly where we want to be offensively. I'm frustrated."