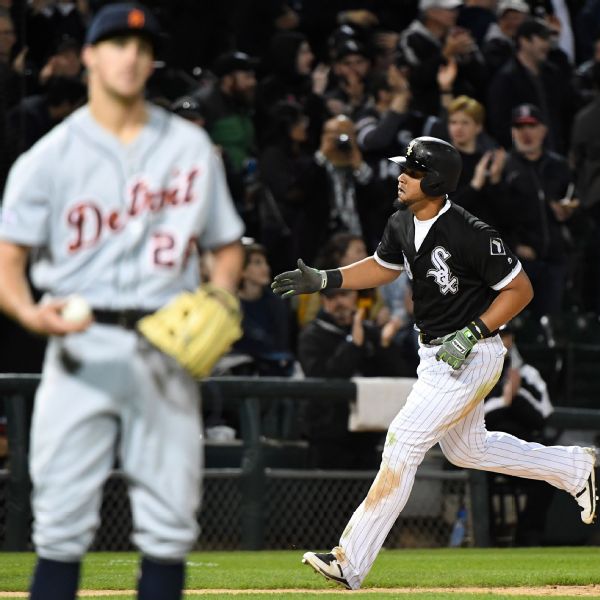 ESPN
By Bradford Doolittle
CHICAGO -- In a game that grew more bizarre by the inning, Jose Abreu of the Chicago White Sox provided the most mad-cap moment of a wild contest by passing teammate Tim Anderson on the bases, erasing a key home run.

The Chicago slugger seemingly gave his club a 12-10 lead with a three-run blast to center field in the bottom of the seventh off Detroit's Reed Garrett. It should have been his second homer of the game and given him six RBIs on the night. Instead, as he jogged around first base, he passed Anderson, who had retreated to the bag to tag up in case Abreu's deep fly was caught at the fence.

"That's the first time I've ever seen it," White Sox manager Rick Renteria said. "Again, we had a couple of things happen today on the bases. You have to keep your head up and understand the situation. You can't get lost in the emotion. I think he got lost in the emotion a little bit."

Initially, the umpires ruled that Abreu had not passed Anderson, and he rounded the bases. But numerous players and coaches in Detroit's dugout immediately saw what had happened and pointed excitedly toward first base. Manager Ron Gardenhire challenged the call, which was reversed after a replay review, and Abreu was ruled out.

The play was officially scored a rare out-of-the-park, two-run single. Abreu got credit for two RBIs instead of three and was ruled out with first baseman John Hicks getting credit for an unassisted putout. Instead of a two-run advantage, Chicago led 11-10.

After the game, Abreu took full responsibility for the mix-up.

"I just made a mistake," Abreu said via White Sox interpreter Billy Russo. "It was my mistake. When I hit the ball, I just thought it was a regular fly ball to the warning track. I didn't see [Anderson]. It happened. It was my mistake."

Abreu's mistake immediately came back to haunt the White Sox when the Tigers' Ronny Rodriguez led off the eighth with a home run to left, tying the score at 11. Anderson bailed out Abreu in the bottom of the ninth when his two-out solo homer gave the White Sox a 12-11 win.

"It was a crazy game," Abreu said. "All the guys stayed positive and stayed eager about the game. They didn't quit. At the end, we got the win."

While Abreu's unusual miscue will dominate the highlight reels, the play was just the latest twist in a wild contest that featured 23 runs, 36 hits, 11 walks, nine homers and four wild pitches. Add to that list one signature bat flip -- Anderson's firing of his stick after connecting for his game-ending homer off Detroit reliever Joe Jimenez.

The Tigers led 9-2 at one point, but the White Sox ultimately completed their biggest comeback since also coming from seven runs down to beat Detroit on June 13, 2016. Four relievers combined to hold Detroit to three runs over the final six innings after Chicago starter Carlos Rodon was tagged for eight runs over three-plus frames.

"Ultimately, you have to give the credit to all the players," Renteria said. "Because they didn't quit. They kept grinding. That's a big deficit to keep yourself going and motivated and pushing. And they did."

According to the baseball research site retrosheet.org, the last player to lose a home run because he passed a teammate on the bases was Arizona's Deven Marrero, who did it on April 14, 2018, against the Dodgers. The only White Sox player to suffer that fate was Ralph Garr, against the Twins on June 24, 1977.

In both instances, the circumstances were similar to the Abreu mistake -- the homer hitter passed a runner tagging up at first base on a fly ball that ultimately just cleared the wall.

"I've never seen that, that was crazy," Anderson said. "It was different. It kind of shocked me. I didn't expect him to be that far [along the basepath]. But we were able to get the win." 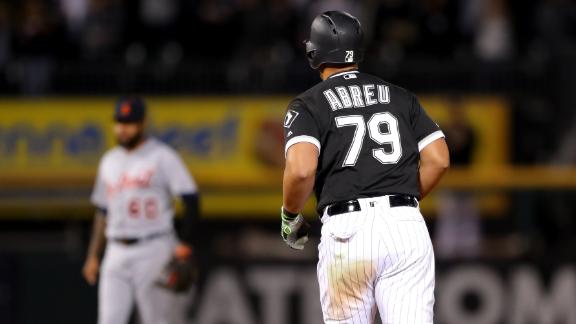