Chris Bosh hopes to return to Heat this season 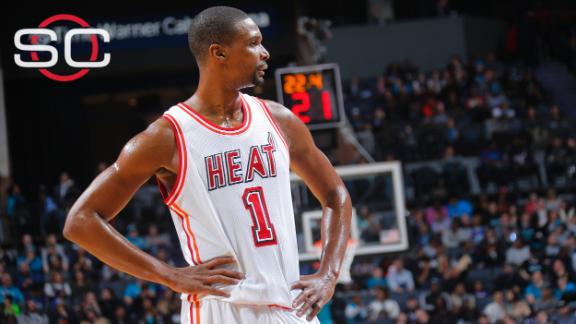 MIAMI -- Chris Bosh said he currently is not dealing with active blood clots and that he remains hopeful he can return to help the Miami Heatmake a playoff push this season.

Bosh released a statement Thursday announcing that he does not currently have deep vein thrombosis -- or blood clots in his leg.

"I know there have been many questions regarding my health and when I will play again," Bosh said. "My situation this year has never been life threatening. I am feeling great and currently I do not have deep vein thrombosis."

The 11-time All-Star, who posted Saturday on Twitter that he was "feeling good," said he's working with doctors on "precautionary treatment options," but he did not offer a potential timetable for his return to the court.

Team doctors would have to clear Bosh, who has been seeking numerous opinions on how to treat his unspecified condition, before he would be able to play in games for the Heat. The team has yet to issue a statement on Bosh other than to say he's away from the team due to medical reasons.

"[I have been] taking every necessary step to make sure I am healthy for myself, my family and my team. I have been working out, training with the team, watching film of the games, walking through plays, and have attended home games despite not being visible to the public. I will continue to support my teammates in every way possible. I remain positive that I will be able to return this season. I truly appreciate everyone's concern and support."

Bosh, 31, was ruled out of the All-Star Game with what was described as a calf strain. Multiple league sources have confirmed Bosh's condition is more serious than the strain, but team officials have declined to provide specific details.

This is the second time in as many years that Bosh's season has been interrupted by a health scare. Last season, Bosh missed Miami's final 30 games to treat a blood clot that had traveled from his calf to his lung and led to him dealing with severe pain and being hospitalized for several days.

Heat coach Erik Spoelstra said Sunday that Bosh would work out with the Heat's staff, but away from the rest of the team. Bosh has posted on social media in recent days that those workouts have begun.

Sources told ESPN's Michael Wallace that Bosh will be continued to be evaluated closely by the Heat to see how his body responds to increased levels of activity in the coming weeks before anything is determined about a potential return.

Miami is 8-3 since the All-Star break, the fourth-best record in the NBA over that span. The Heat have played faster in Bosh's absence, and they added Joe Johnson late last month -- immediately putting him in the starting lineup at small forward after shifting Luol Deng from that spot to one where he starts in Bosh's position, power forward.

Bosh was averaging 19.1 points per game before being sidelined.

The Heat play in Chicago on Friday. They were off on Thursday, with no practice or availability scheduled.

If Bosh is deemed to be susceptible to blood clots -- a test he took last year suggested that he was not -- it could be a career-threatening issue. Clots are often treated with blood-thinning medications, and athletes who are involved with contact sports are typically advised to avoid using such medication because of the heightened chance of bleeding.

Bosh signed a five-year, $118 million deal in the summer of 2014. He's slotted to make nearly $76 million over the next three seasons.