Cobb: Marshawn Lynch-Clay Matthews like 'The Beast vs. The Predator' 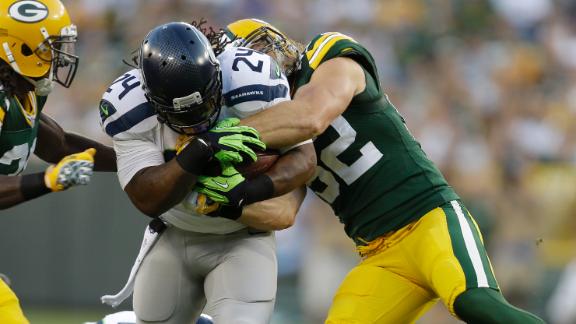 GREEN BAY, Wis. -- One of the most intriguing matchups in Sunday night's game at Lambeau Field is Marshawn Lynch versus Clay Matthews.

The Seattle Seahawks running back against the Green Bay Packers linebacker.

Or as Packers receiver Randall Cobb put it: "The Beast versus The Predator; it's like a movie."

When Matthews lines up at inside linebacker, as he's likely to do on the majority of his snaps, he will stare across the line of scrimmage right into Seahawks' backfield at Lynch.

Forget for a moment that football is a game of 11-on-11. Sometimes, it's the one-on-one, head-to-head battles that are most memorable.

"There's no question," said Scott McCurley, the Packers' inside linebackers coach. "You've got to win those one-on-one matchups."

Put them in a room together and, as Packers running back Eddie Lacy said, "It'd be a catastrophe."

Lacy can appreciate the matchup from both perspectives. As a runner, he and Lynch have similar styles. Both use their size and strength to break tackles and bowl over defenders. The third-year running back also has had his share of collisions with Matthews in practice.

In two games last season against the Packers, Lynch rushed for a combined 267 yards and three touchdowns. However, Matthews played inside linebacker in only one of them -- the NFC Championship Game. Lynch rushed for 157 yards in that game, but he gained 95 of them in the fourth quarter.

Matthews did not play because of injuries on the Packers' final three defensive series of regulation, which included Lynch's 24-yard go-ahead touchdown run with 1:25 left in regulation.

"He's an extraordinary athlete," Seahawks coach Pete Carroll said of Lynch. "He's got unbelievable power. He's got such a style about the way he runs. He's just built with a great base under him and he's got this great attitude about him and he's such a powerful athlete. You might not realize he's a really good all-around athlete. He's a great hand-eye guy; he can do everything. He's a basketball player, he can play baseball, he can do anything. He uses all of those natural abilities to go along with such an exceptional frame that he plays with and he's just not slowing down at all. So we're lucky to have him."