Colangelo: Kobe 'would love to ride off into sunset' with gold medal 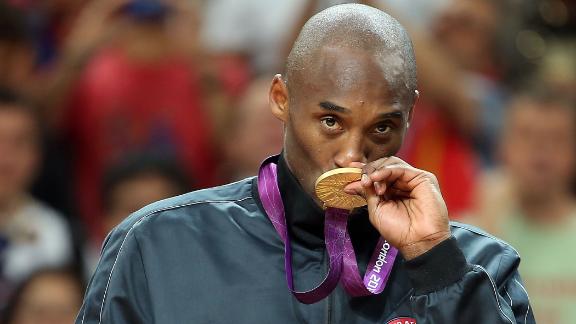 LAS VEGAS -- Could the lasting image to capKobe Bryant's basketball career be of him donning a gold medal at the end of the 2016 RioOlympics?

USA Basketball chairman Jerry Colangelo said Thursday at the conclusion of Team USA's minicamp that he has had a conversation with theLos Angeles Lakersguard aboutthat very scenario and has not ruled out Bryant for the 12-man roster next summer.

"I was quoted on Kobe," Colangelo said after USA Basketball's intrasquad scrimmage at the Thomas & Mack Center. "In response to a question about him, I said it would be a great story if he did [play in Rio].

"And so, he also mentioned to me in a private conversation that if he had his druthers, he would love to ride off into the sunset playing one more time and winning the gold medal. And that would be the end. But he was very quick to say, 'But, I don't want a spot. I need to earn the spot. I need to be capable of playing at that level to be considered.' And I said, 'You got that. That's always there for you, Kobe.'"

Bryant, who turns 37 later this month, will be entering his 20th and possibly final NBA season in the fall; his contract is set to expire at the conclusion of the 2015-16 campaign.

Bryant previously announced he did not plan to play in Rio, tacking on a joke at the expense of former teammate Pau Gasol when he said he would possibly still attend as a spectator to "see Pau win another silver medal."

The U.S. team, featuring Bryant, beat Gasol in the gold-medal round in both the 2008 Beijing Olympics and 2012 London Olympics.

Colangelo and coach Mike Krzyzewski hosted a pool of 30-plus players in Las Vegas this week and insinuated before camp began that participation was mandatory in order to be eligible for consideration for the Rio Games. However, both men left the door open for players such as Bryant and former league MVP Derrick Roseto make the team, even though they were not present for the camp.

Bryant was on vacation in Japan with his family during the camp this week, according to a source familiar with Bryant's summer itinerary.

When asked about the selection process, Krzyzewski described the balance between honoring a player's previous service to the program while recognizing the emerging players who are also competing for spots on the roster.

"You just try to pick the best team," Krzyzewski said. "It's equity [built up from previous participation] as long as the talent from guys who have equity continues to be at that level with the newness of other maturing talented players."

Colangelo said Thursday that he expects to set a 12-man roster for Rio soon after next year's NBA draft.

The Colangelo/Krzyzewski leadership structure, which took over USA Basketball in 2005 and brought it back to prominence, has shown a preference for including a veteran leader in the roster structure in the past, granting a 35-year-old Jason Kidd a place on the 2008 Olympic squad.

"There's a guy who's made great contributions to the game, again, one of the great players of all time," Colangelo said of Bryant. "He helped us win the gold medal in Beijing. Trust me, he really did. And so he's entitled to an opportunity.