Colin Kaepernick: Truth getting out 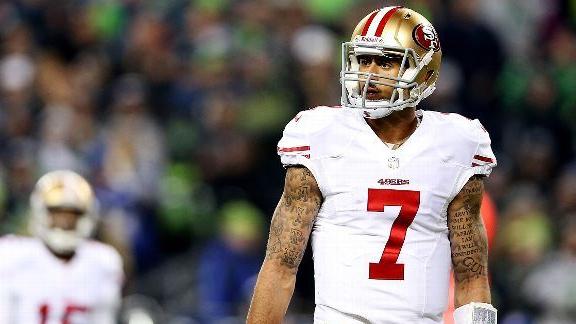 Colin Kaepernick took to Twitter on Wednesday in response to the 911 tapes released in the investigation in Miami involving the San Francisco 49ers quarterback, tweeting that he is "glad the truth is getting out."

A naked woman who referred to herself as "Jesus" was the focus of two emergency calls placed April 1, according to 911 tapes released Tuesday.

Kaepernick weighed in less than 24 hours later on Twitter.

On 911 calls, I'm glad the truth is getting out. Info that came out earlier was totally wrong. I look forward to this matter being resolved.

- Colin Kaepernick (@Kaepernick7) May 7, 2014Police did not identify the men who made the calls. In the first call, a man who identified himself as hotel security said a woman was in the hotel room and was refusing to leave.

"She said her name was Jesus, and she don't have no clothes on," he told the 911 operator.

When the 911 operator asked who the woman was visiting, the man said: "She's visiting this gentleman here."

The second call was made by another male, who requested that police come to the room because, he said, the woman was lying in bed "and she's not leaving" until a friend of his showed up.

"There's a young lady in my friend's bed," the caller said. "She says she's not leaving until she sees him. ... No, no, he's not her boyfriend. He's someone she wants to sleep with."

Two days after the 911 calls were placed, an unidentified woman went to Miami police headquarters saying she'd been partying with Kaepernick, 49ers receiver Quinton Patton and Seattle Seahawks receiver Ricardo Lockette, passed out and didn't remember anything else until waking up in a hospital.

Police have not called it a criminal investigation, referring to it instead as a "suspicious incident."