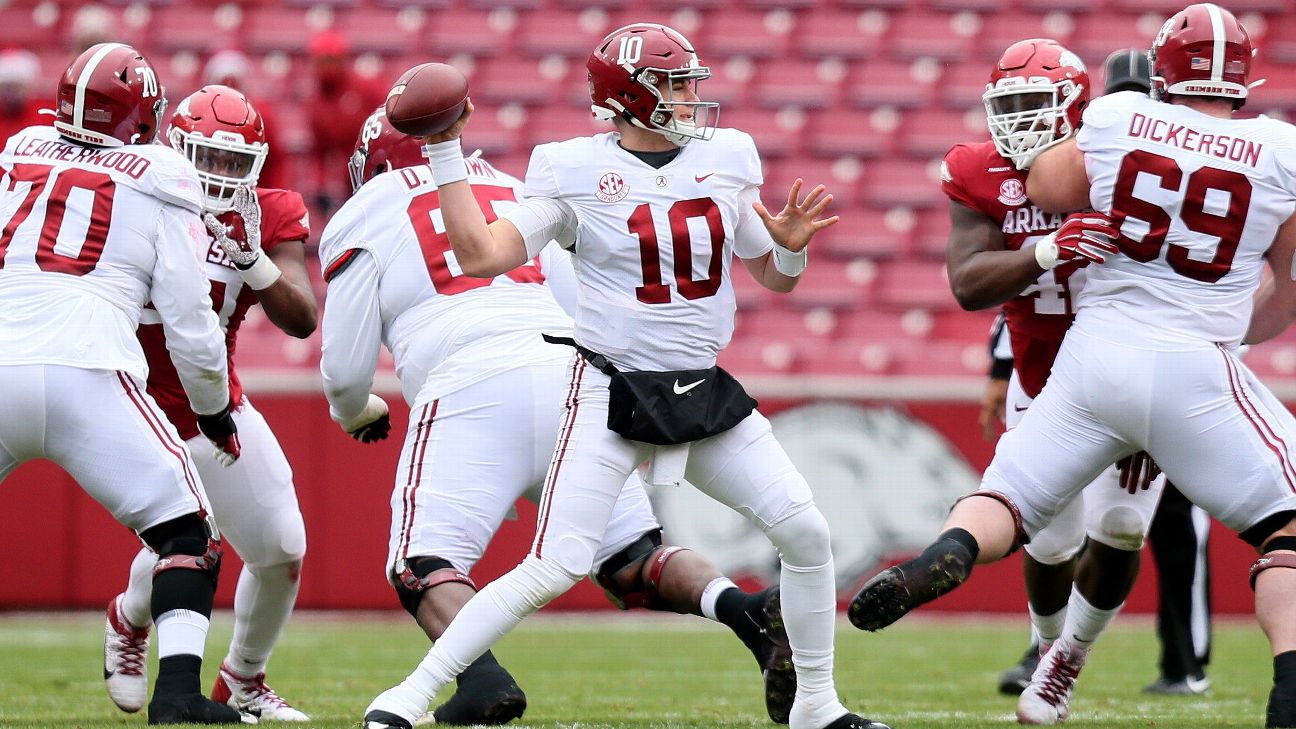 It was cancellation weekend in college football, as a ton of games weren't played because of COVID-19 issues.

But as we point toward the conference championship games, the usual suspects remain at the top of the ESPN power rankings in Week 15.


The biggest riser was USC, which jumped into the top 10 thanks to a stirring comeback win over UCLA to remain unbeaten. Granted, the Trojans have played just five games, but it will be interesting to see what kind of love Clay Helton's Men of Troy get on Tuesday from the College Football Playoff selection committee.

And talk about tossing away your hopes for a potential playoff spot. See Florida's 37-34 loss at home to a struggling LSU team, sending the Gators packing from the top 10.

The Crimson Tide completed their third unbeaten regular season in the past five years Saturday with a 52-3 rout of Arkansas on the road. Alabama's closest game this season was a 17-point win over Georgia back on Oct. 17, and the Tide have won their past five games by a total of 217 points. Alabama, which rushed for 216 yards Saturday, likely locked up a spot in the College Football Playoff even if the Crimson Tide were to lose to Florida in the SEC championship game.

Up next: vs. Florida in SEC championship game (Saturday, 8 p.m. ET, CBS)

The Fighting Irish had an off week leading into their rematch with Clemson this coming Saturday in the ACC championship game. Notre Dame has won its past three games by at least two touchdowns after beating Clemson in two overtimes back on Nov. 7. Notre Dame has won an FBS-best 16 straight games dating back to last season and is in good shape to play in the College Football Playoff whether it wins or loses against Clemson in the ACC title game.

Up next: vs. Clemson in ACC championship game (Saturday, 4 p.m. ET, ABC)

The Tigers also had a week off to get ready for the ACC championship game. And this time, they will have star quarterback Trevor Lawrence when they take on Notre Dame. Lawrence didn't play in the Tigers' double-overtime loss to the Irish last month after testing positive for COVID-19. Clemson can't afford another loss if it's going to make its sixth straight College Football Playoff appearance.

Up next: vs. Notre Dame in ACC championship game (Saturday, 4 p.m. ET, ABC)

The Game against Michigan was canceled last week because of COVID-19 issues within Michigan's program, but Ohio State still got a huge win off the field. The Big Ten voted to change its rule that a team had to play at least six games to qualify for the Big Ten Conference championship game this season, paving the way for the 5-0 Buckeyes to play for the league title and potentially a spot in the College Football Playoff.

Up next: vs. Northwestern in Big Ten championship game (Saturday, noon ET, Fox)

The Aggies' game against Ole Miss on Saturday was canceled due to COVID-19 issues within Ole Miss' program, which means the most games Texas A&M could play during the regular season is nine. Nonetheless, if the Aggies win this coming Saturday at Tennessee, there's still a pathway for them to the College Football Playoff. They would need Alabama to win the SEC championship game and Notre Dame to beat Clemson in the ACC championship game, and then the Aggies could potentially slide into that No. 4 spot.

Up next: at Tennessee (Saturday, noon ET, TBA)

The Bearcats' game against Tulsa on Saturday was canceled due to COVID-19 cases within Cincinnati's program. The Bearcats have not played since Nov. 21, when they beat UCF 36-33. They hope to not be too rusty when they try to keep their unbeaten season alive against Tulsa this coming weekend in the AAC championship game.

Up next: vs. Tulsa in AAC championship game (Saturday, 8 p.m. ET, ABC)

Clearly, Coastal Carolina loves drama. For the second straight week, the Chanticleers won in thrilling fashion, the latest a 42-38 road victory over Troy on Saturday. Redshirt freshman quarterback Grayson McCall led a clutch touchdown drive in the final minute, capped by a 23-yard touchdown pass to Jaivon Heiligh, and Coastal Carolina became the first Sun Belt Conference team in history to start a season 11-0. The Chants have won 12 straight games dating to last season, the second-longest streak among FBS teams.

Indiana and Purdue mutually agreed to cancel the Old Oaken Bucket Game after both teams paused all team-related activities last week due to COVID-19 issues. It was the first time since 1919 that the two rivals didn't play. The Hoosiers' only loss this season was by a touchdown on the road to unbeaten Ohio State, and they held three of their past four opponents to 11 or fewer points.

The Trojans have been the essence of resiliency this season and mastered the art of the comeback. They did it again Saturday in rallying from a 28-10 deficit early in the third quarter to beat crosstown rival UCLA, 43-28, at the Rose Bowl. It was the third comeback win of the season for USC, which got five touchdown passes from sophomore quarterback Kedon Slovis. Four of those TD passes came in the second half. It's USC's first 5-0 start since 2006, and the Trojans will now host the Pac-12 championship game.

Georgia won its third straight game Saturday by pulling away from Missouri for a 49-14 blowout victory on the road. The Dawgs were dominant on both lines of scrimmage, and their defense smothered a Missouri offense that had been red-hot. The Tigers finished with just 200 yards of total offense. Georgia has been much more explosive offensively with JT Daniels at quarterback. The Dawgs are averaging 41.7 points in his three games as a starter.

Up next: vs. Vanderbilt (Saturday, noon ET, TBA)

The Cyclones were off this week as they prepare for their first appearance in the Big 12 championship game, in which they'll take on Oklahoma this coming Saturday in Arlington, Texas. Iowa State hasn't won a conference title since sharing the 1912 Missouri Valley Conference championship with Nebraska. Matt Campbell's club has won five straight games. The Cyclones' only conference loss was to Oklahoma State on Oct. 24, a 24-21 setback.

Up next: vs. Oklahoma in Big 12 championship game (Saturday, noon ET, ABC)

The Cougars became the fourth team in the country to reach the 10-win mark and wrapped up the regular season with a 28-14 win against San Diego State. Quarterback Zach Wilson completed 26 of 35 passes for 303 yards with three touchdowns to finish off his Heisman Trophy résumé.

The Wildcats piled up 411 rushing yards Saturday while defeating Illinois 28-10 in what was an impressive tune-up for their Big Ten championship game showdown with Ohio State this coming weekend. It has been quite a turnaround for Pat Fitzgerald and the Wildcats this season. Their only conference win a year ago came against Illinois.

The fog set in Saturday night in the Swamp, and the Gators were left in the fog in an inexplicable 37-34 home loss to LSU, which came in as a 23-point underdog. Florida lost despite churning out 609 yards of total offense. But the Gators also turned it over three times and were hurt by a costly 15-yard unsportsmanlike conduct penalty to keep LSU's go-ahead drive alive when Marco Wilson was flagged for throwing an LSU player's shoe down the field. Now, it's a stretch to think the Gators would make the College Football Playoff even if they were to upset Alabama in the SEC championship game.

Up next: vs. Alabama in SEC championship game (Saturday, 8 p.m. ET, CBS)

The Sooners' game Saturday against West Virginia was canceled due to COVID-19 issues within the West Virginia program. Oklahoma had already secured a spot in the Big 12 championship game and will get a chance to avenge a lossto Iowa State earlier this season. The Sooners have won six in a row since that 37-30 setback and have scored more than 40 points in four of those games.

Up next: vs. Iowa State in Big 12 championship game (Saturday, noon ET, ABC)

The Hawkeyes ran their winning streak to six straight games with a 28-7 victory Saturday over Wisconsin after starting the season 0-2. Wisconsin had won seven of the past eight games in the series. Once again, Iowa was dominant defensively. The Hawkeyes held the Badgers scoreless in the first half and have not allowed more than 21 points in any of their games during their winning streak.

Mack Brown and the Tar Heels saved their best for last this regular season with a 62-26 demolition of Miami on the road Saturday. North Carolina racked up a whopping 554 rushing yards, with Michael Carter and Javonte Williams setting an FBS record for the most combined rushing yards by teammates in a game. Carter finished with 308 yards and Williams 236 yards. The Tar Heels closed the regular season by winning four of their last five games.

The Ragin' Cajuns were off Saturday as they get set for another shot at Coastal Carolina in the Sun Belt Conference championship game this coming weekend. The Chanticleers won the earlier meeting in Lafayette30-27 on Oct. 14.

Tulsa's two-game series with Cincinnati was reduced to one game when Saturday's regular-season game was canceled due to COVID-19 issues within the Bearcats' program. Now, it's on to the game that counts -- the AAC championship game matchup with Cincinnati this coming Saturday. It's been a long road full of postponements and cancellations for Tulsa to get to this point, but the Golden Hurricane haven't lost since a season-opening 16-7 setback to Oklahoma State on the road.

Up next: vs. Cincinnati in AAC championship game (Saturday, 8 p.m. ET, ABC)

The Hurricanes had seemingly rebounded nicely since losing to Clemson on Oct. 10, but their five-game winning streak came to a screeching halt Saturday in a shocking 62-26 blowout loss at home to North Carolina. The Hurricanes' game this coming Saturday against Georgia Tech was canceled, so they will now await their bowl destination -- a wait that will seem like an eternity after giving up a staggering 554 rushing yards to the Tar Heels.

The Wolfpack completed their regular season a week ago with a 23-13 victory over Georgia Tech and will now wait to see where they land in the bowl pecking order. After losing back-to-back games to North Carolina and Miami, NC State closed with four straight wins and was able to overcome the loss of starting quarterback Devin Leary earlier in the season.

Up next: Bowl game

There have been a ton of firsts for Liberty this season, even though there was a disappointing finish to the regular season when the Flames were unable to play a week ago against Coastal Carolina because of COVID-19 issues within Liberty's program. Coach Hugh Freeze was recovering from COVID-19 after testing positive last week. The Flames are optimistic they will receive a bowl invitation.

Up next: Bowl game

The Cowboys jumped out to a 35-0 lead and cruised to a 42-3 victory on the road against Baylor. Oklahoma State had lost three of its past five games entering Saturday's contest and won despite playing without star running back Chuba Hubbard, who decided to opt out for the rest of the season and start preparing for the NFL draft. Senior receiver Dillon Stoner more than made up for Hubbard's absence with eight catches for 247 yards and three touchdowns.

The Spartans rallied from a 20-7 halftime deficit Friday night to beat Nevada 30-20 and remain unbeaten. San Jose State, which had back-to-back games canceled to end November, is off to its best start since 1939, when the Spartans finished 13-0. They will now turn their focus to Boise State and the Mountain West Conference championship game.

Up next: vs. Boise State in MWC championship game (Friday, TBA)

Jaret Patterson needed just five games to reach the 1,000-yard mark in rushing, and Buffalo remained unbeaten Saturday with a 56-7 rout of Akron. Patterson has 1,025 yards and 18 rushing touchdowns on the season, and the Bulls will now set their sights on the Mid-American Conference championship game. Buffalo is 5-0 for the first time since 1980 when the Bulls were a Division III program. 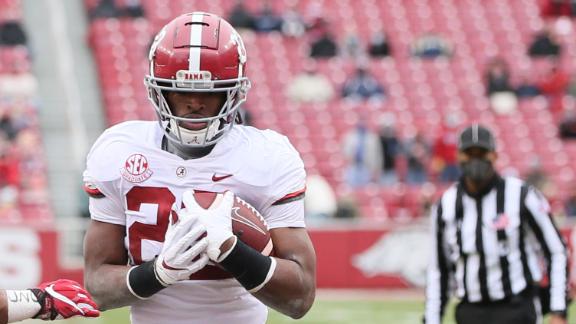 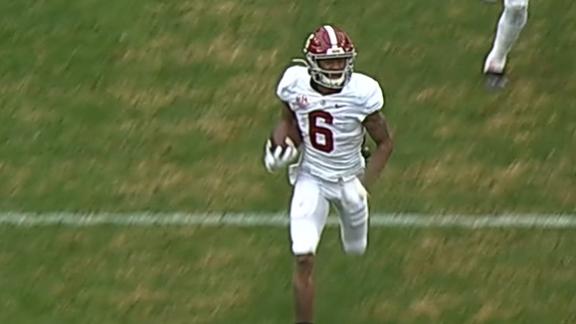 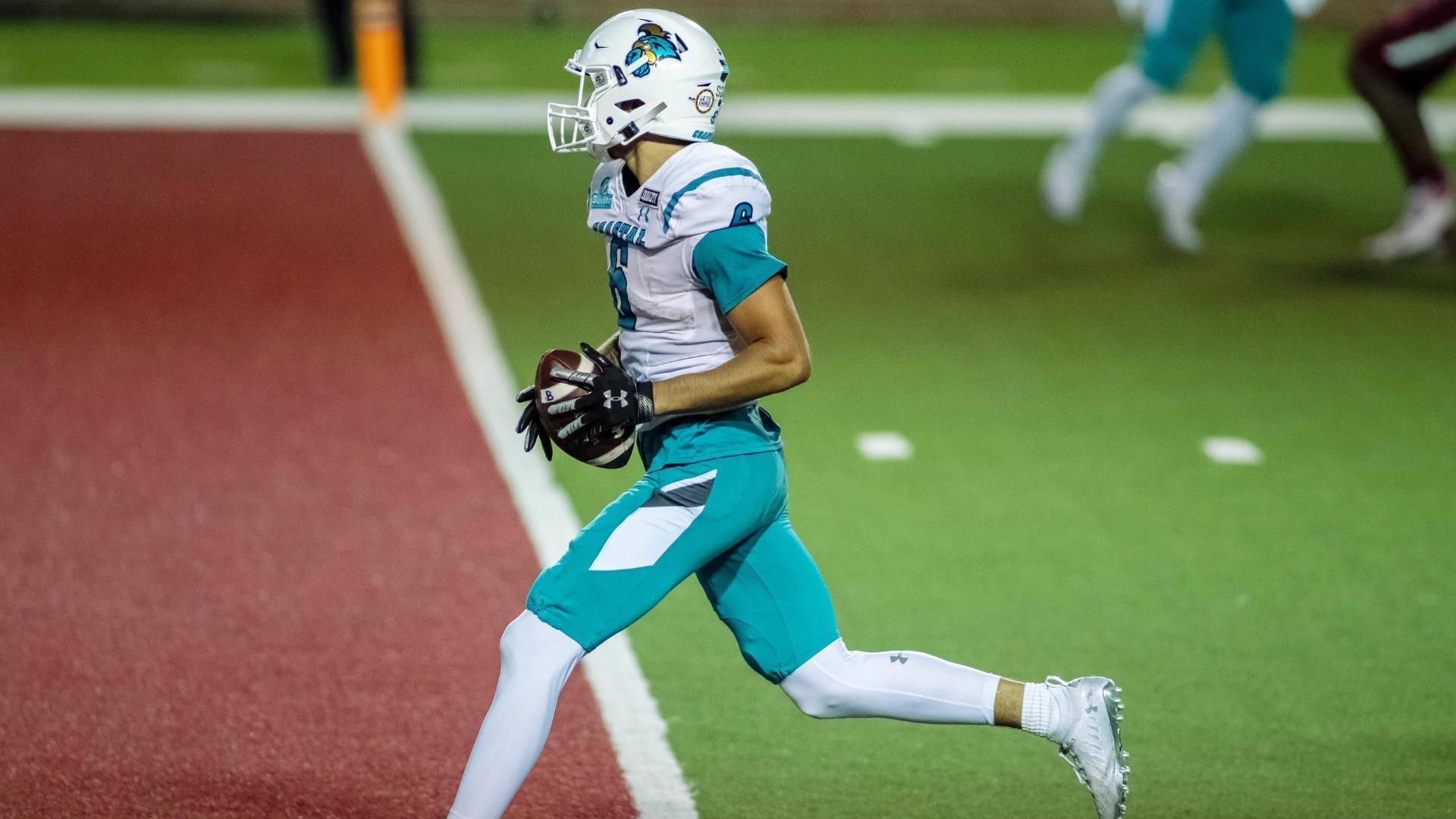 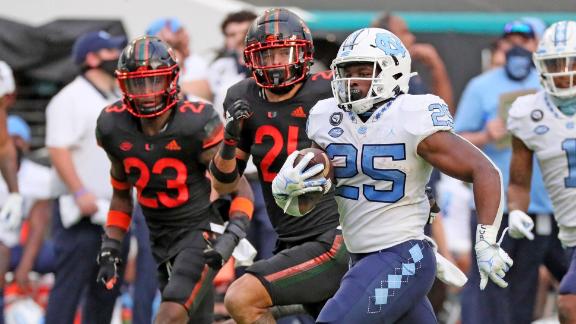