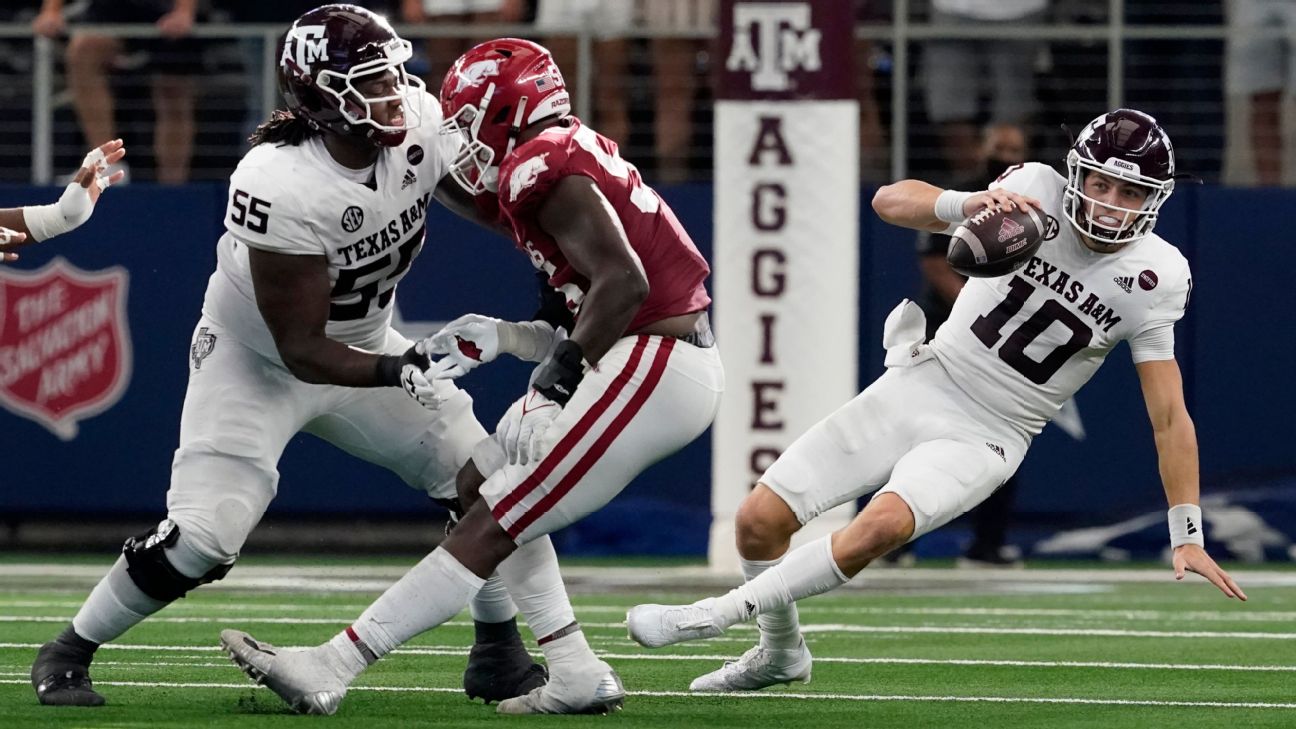 The College Football Playoff field hasn't expanded yet, and the race is already more interesting -- especially afterClemson lost for the second time this season.

Our writersbreak down the biggest takeaways from Week 4 in college football, from the ACC to the Pac-12.

Texas A&Mbetter get creative to save its season

The biggest questions facing Texas A&M after its stellar 2020 season were how it would replace four-year starter Kellen Mond at quarterback and the four starting offensive linemen who powered the Aggies' potent ground game.

After losing starting QB Haynes King to injury, those questions loom larger than ever. His replacement, Zach Calzada, has struggled. The Aggies have scored 95 points in four games. Among SEC teams, only South Carolina(89) and Vanderbilt(50) have scored fewer. The offensive line has struggled despite Jimbo Fisher trying multiple combinations up front. In the two games Calzada has played against Power 5 competition, he has completed just 51.4% of his passes for 334 yards with one touchdown and one interception. The Aggies scored 10 points in each, a 10-7 win over Coloradoand Saturday's 20-10 loss to Arkansas.

Against the Hogs, A&M ran 20 plays and had three first downs in the second half, yet managed to break open a 67-yard touchdown run by Isaiah Spiller with 7:51 left in the third quarter. That would be Spiller's last carry of the game. Devon Achane, his backup, got the only carry by an Aggies running back after that, for eight yards on first down with about four minutes left in the third quarter. Aggies wide receivers caught seven passes for 81 yards the entire game. Star tight end Jalen Wydermyer caught one for 18.

Mike Elko's defense has been a highlight of the Fisher era in College Station, yet in three meetings with Alabama, the Aggies have given up 45, 47 and 52 points. We know A&M can't keep that pace. But at this rate, you have to wonder if Fisher's offense can hang in there against Mississippi Statenext week, not to mention later games against MissouriandOle Miss. If the Aggies don't find a way to throw the ball down the field, it could be a long road from here on out. -- Dave Wilson

Some positivity in the ACC

It's open season on an even weaker than normal ACC, especially given Clemson's 27-21 loss Saturday in double overtime to NC State. Going back to the start of the 2015 season, Clemson had won 53 of its last 56 games against ACC opponents before coming up short against the Wolfpack. So, yes, Clemson has dominated the ACC. And, yes, the ACC has essentially been Clemson and everybody else ever since Florida State faded into the football wasteland. It's difficult to see a pathway this season for the ACC to be included in the College Football Playoff festivities.

But perhaps there's a more positive way to look at the carnage in the ACC to this point. The only two unbeaten teams overall are Boston Collegeand Wake Forest, two schools that are hardly recognized as football factories with two head coaches who've done tremendous jobs. Jeff Hafley is in his second season at BC after guiding the Eagles to a winning record in Year 1 during the middle of the COVID-19 pandemic. And Dave Clawson is one of the most underrated coaches in college football. He has improved programs and players everywhere he has been as a head coach. His teams play smart, disciplined football, and rarely does he have the better personnel on the field. -- Chris Low

A bigger playoff race without the expanded field

The College Football Playoff race is already more interesting, and it hasn't even expanded yet. Clemson's second loss has essentially eliminated a weak ACC (still a premature declaration tempered with reality), making room for somebody else (or in the SEC's case, two somebodies). While the field will naturally narrow -- especially with so many critical conference games looming in October -- new dark-horse candidates have emerged.

The Big Ten still has five undefeated teams (don't forget about Maryland!), and Arkansas looks ahead of schedule under coach Sam Pittman. Floridais motivated by getting a second chance at Bama in the SEC title game. UCLAhas only one loss and gets Oregonat home on Oct. 23, and nobody outside of the Big 12 seems to have noticed Oklahoma Stateis undefeated, too. Cincinnatihas a chance to earn a statement win at Notre Dameon Saturday. And while the Irish continue to figure out their identity, they keep finding ways to win as well.

Parity or mediocrity -- however you want to label this season -- means more teams can be in the mix. We'll see how long it lasts. -- Heather Dinich

Finally, some good NC State fortune for a change

After Christopher Dunn missed a game-winning field goal at the end of regulation against Clemson, you couldn't help but get a sinking feeling about NC State. The same script unfolded so many times against the Tigers in nine years under Dave Doeren. In 2013, Bryan Underwood had a touchdown called back that changed momentum in the game, and for years afterward Doeren kept a screenshot on his phone that showed Underwood tiptoeing the sideline in-bounds as a reminder of what should have been.

In 2016, the Wolfpack missed a short kick in regulation and eventually lost. Similar heartbreak in 2017, when NC State led at halftime and eventually lost. But Doeren felt different about this team headed into the season because it returned so many veterans, and he believed his players had a greater understanding and appreciation for the work that goes into winning a championship.

Yet reality was right in front of him: "There's something on the table we want to have and Clemson's been a team that's taken it every year," Doeren said in early September. "So we've got to get over that hump, if that's possible. We finished second to them twice so I think it is possible. I feel like we're in a pretty good spot."


Those words seem prophetic now. NC State did not wilt the way it has been known to do. Rather, the Wolfpack rose to the occasion, steeling itself in double overtime behind a magnificent touchdown pass from Devin Leary to Devin Carter and a defensive stop that won't soon be forgotten in the second overtime. It hardly matters that Clemson is down. NC State beat a top-10 team for the first time since 2012. Doeren beat Clemson for the first time, and now NC State is in the driver's seat in the Atlantic Division.

During an interview on ACC Network afterward, Doeren smoked a victory cigar and had a smile a football field wide. But NC State is also a team that scored 10 points at Mississippi State just two weeks ago and has a history of bad stuff happening when things seem to be going well (there's a phrase for it, too!). The bulk of the season remains for NC State to truly flip the script and put its past history where it belongs. -- Andrea Adelson

Stock up on Oregon State

Coming into the season, Oregon State was tired of being close. The Beavers made obvious signs of progress during coach Jonathan Smith's first three seasons but finishing games was a major problem. Dating to 2019, the Beavers were in a one-score game in the fourth quarter in eight of their last nine losses. That represents a massive improvement over 2017 and 2018 when they were uncompetitive, but it was also a source of frustration in that they weren't able to find ways to win.

After four games in what is a down year for the Pac-12, the Beavers are one of the bright spots. After losing the opener to Purdue-- in another game that was close in the fourth -- the Beavers have rattled off three straight dominant wins. Saturday's 45-27 victory against USCat the Los Angeles Memorial Coliseum was the Beavers' first win there since 1960.

It's still too early to have a great feel for how good this team is, but it would come as a major surprise if the Beavers don't finish conference play with a winning record. That hasn't happened since 2012, the lone time it has occurred over the past 11 years. Smith was a major reason for Washington's rise after arriving with Chris Petersen as the offensive coordinator in 2014 and deserves praise here for the trajectory of his alma mater. -- Kyle Bonagura 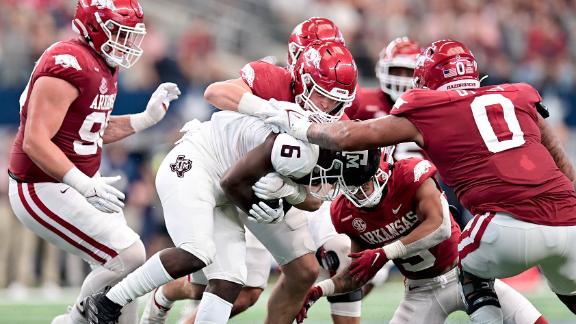 No. 16 Arkansas hogties No. 7 Texas A&M
The Razorbacks build an early 17-0 lead en route to their first SEC win over the Aggies in a decade of trying, 20-10. 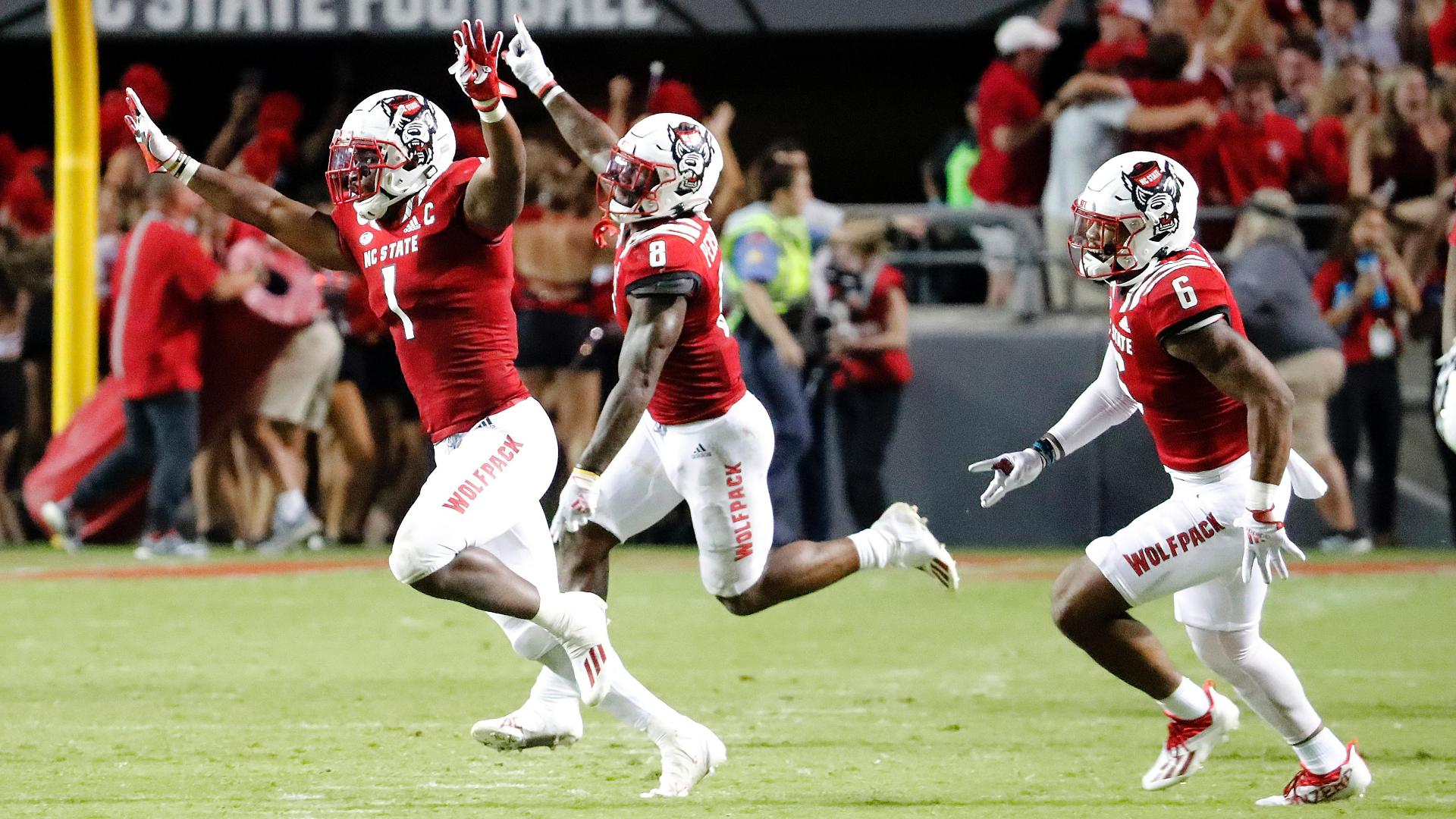