We know there are big games happening! We just don't always know who will be playing in them.


Speaking of, the biggest game of the young season is upon us Saturday as No. 3 Georgia visits No. 2 Alabama at 8 p.m. ET

In the meantime, we'll keep tabs on all of that for you right here along with the big plays, the turnover doodads and the mascots.

The Aggies' 28-14 victory over Mississippi State didn't come easily, but they'll take it against old nemesis Mike Leach. The defense was the star, never allowing the Bulldogs to threaten and holding them to just 217 total yards, including minus-2 yards on the ground on 20 attempts. A week after Kellen Mond torched No. 4 Florida, he completed just 13 of 23 passes for 139 yards, but the backfield duo of Isaiah Spiller and Ainias Smith carried the day. The two combined for 205 total yards with three touchdowns -- Spiller with a pair of short scoring runs and Smith with a receiving TD. -- Dave Wilson

It was an uninspiring result on offense for Notre Dame, but credit Louisville's defense for making everything difficult for the Fighting Irish. After putting up 52 and 42 points the past two weeks, the Irish were held to 12 points Saturday. It's not going to get much easier next week when Notre Dame has to play Pitt, which has an excellent run defense, allowing only 61.5 rush yards per game this season. The good news is Notre Dame's defense was able to hold the visiting Cardinals to 234 yards and only seven points, but the offense needs to get back on track. --Tom VanHaaren

The Tigers got away with a win against Arkansas last week, but couldn't escape South Carolina in a 30-22 loss. Auburn quarterback Bo Nix didn't play like the good version of himself, going 24-of-47 passing for 272 yards, one touchdown and three interceptions. There was a lot of potential for Auburn coming into this season, and right now, that potential isn't producing results many expected. It was an all-around bad performance for Auburn, and a loss to this South Carolina team is one of the lowest of lows. -- Harry Lyles Jr.

Trevor Lawrence threw his first interception in a year (gasp!) but that was the only thing that went wrong for the Tigers in an absolutely dominant performance against Georgia Tech. Lawrence finished with the gaudiest numbers he has ever posted in a half: five touchdown passes (the most he has thrown in a half in his career) and 404 yards passing (the first 400-yard passing game of his career). Lawrence played one drive in the second half before calling it a day, for good reason. Clemson scored 52 first-half points, tied for the second most by an ACC team in conference play. -- Andrea Adelson

Miami used several big-play touchdowns to beat Pitt, a week after losing handily to No. 1 Clemson. There is plenty of good news there, because the Hurricanes did not let their disappointing performance a week ago beat them again. But it was an uneven offensive performance outside those big-play touchdowns (three of the four went for 35-plus yards). Part of that is because they did not have their top receiving target in tight endBrevin Jordan. But the other part is the Hurricanes had problems establishing their running game, and D'Eriq King threw two interceptions. -- Andrea Adelson

It felt as though the Volunteers never had much of a chance after Jarrett Guarantano threw two interceptions for touchdowns early in the second quarter against the Wildcats, and they didn't. After the Vols got thrown around in the second half against Georgia last week, Kentucky continued to pile on Tennessee in the first half of Saturday's game. Things aren't going to get any easier, as Tennessee welcomes Alabama to Knoxville next week. At this point, the bar for what you'd want to see as a Vols fan is improvement. -- Harry Lyles Jr.

The Ragin' Cajuns had close calls their previous two weeks against Georgia State and Georgia Southern, and it finally caught up with them against Coastal Carolina, which is now 4-0. Louisiana didn't play a particularly bad game; this was simply one of those games in which whoever had the ball last was going to win, and Coastal had it last. Though Louisiana's dreams of going undefeated are gone, there's still plenty of season left for it to finish atop the Sun Belt. -- Harry Lyles Jr.


An all-or-nothing performance produced just enough alls -- seven gains of 30-plus yards -- for Sonny Dykes' Mustangs to remain undefeated. SMU overcame four different deficits, and both teams missed long field goals in the final minute of regulation before Brandon Crossley's overtime interception set up the game-winning field goal. Four different receivers caught at least one 40-yard pass, and three finished with at least 100 yards. It was a heck of a by-committee performance in the absence of injured star receiver Reggie Roberson Jr.-- Bill Connelly

BYU's win was three distinct games in one: BYU bolted to a 14-3 early lead, Houston took control with a 23-0 run in the middle quarters, and BYU outscored the hosts 22-0 in the final 15 minutes. The BYU defense completely shut down an explosive Houston offense over its last four possessions, and even without star wide receiver Gunner Romney for much of the game, Zach Wilson went 25-for-35 for 400 yards and four touchdowns. This BYU team is for real.-- Bill Connelly

It took a while for Alabama's defense to find its footing. Linebackers Dylan Moses and Christian Harris looked truly lost in the first half. But then halftime came and everything changed, and the next four possessions for Georgia ended in back-to-back punts, followed by back-to-back interceptions. And if you give Mac Jones and the Alabama offense that to work with they're going to capitalize and put the game away. Consistency is going to be key moving forward, with Tennessee coming up next, but if Alabama's defense can build off the second half and round into form, then watch out. -- Alex Scarborough

So maybe Stetson Bennett isn't the guy to lead the Bulldogs back to the playoff. He was great to start the year and was sharp for much of the first half against Alabama. But when push came to shove, he broke down, tossing back-to-back interceptions that were ultimately too much to overcome. Where coach Kirby Smart goes from here is unclear. De'Wan Mathis didn't look like the answer in the season-opener, and there's a reason J.T. Daniels continues to take third-team snaps in warm-ups. It may be Stetson Bennett or bust from here on out, starting with a resurgent Kentucky team next week. -- Alex Scarborough

Arkansas had the best reaction following its 33-21 win over Ole Misswith a priceless dig at Lane Kiffin.

Which TD catch was better?

Thayer Thomas made a heads-up play to somehow get the score for NC State.

Elsewhere, Arkansas' Treylon Burks made this incredible catch in the end zone.

We'll let you decide which play was more impressive.

With Clemson up by 66 points, this fan decided he had seen enough for one day.

'He wants that bone!'

The most recent incentive for causing a turnover? NC State's turnover bone.

South Carolina's Shi Smith goes way up to haul in the TD on a free play for the Gamecocks.

And early in the fourth quarter, Smith added another incredible catch to his highlight reel.

We're a week from the Big Ten's return, so here are some cool Nebraska alternates celebrating the "Blackshirts" tradition of the Huskers' defense.

And while we're on the topic, let's all appreciate the 'stache on Kurt Warner's son, Cornhuskers wide receiverKade Warner.

Kick it into gear

Cincinnati made a little TikTok-esque video unveiling its road unis.

Unfortunately, the Bearcats' game this week at Tulsa has been postponed due to COVID-19 cases, so they will have to wait to break these out on the field.

Make yourself at home

Georgia Southern was to wear its white road uniforms at home for the first time Saturday when it faced UMass, which was playing its first game of the season, because the Minutemen's away uniforms hadn't arrived yet from Adidas.

A tribute to Tom

Last month, Tom III, the beloved mascot of the Memphis Tigers, died, but his presence is felt at the Liberty Bowl once again thanks to a new billboard.

Tom III's last game was a win over rival Cincinnati in late 2019.

Following a 4-0 start to the season, including a big win over a ranked Louisiana team on Wednesday, the Coastal Carolina Chanticleers have become a media darling.

Several media members on Twitter have started the hashtag #RankCoastal, and ESPN's Scott Van Pelt even gave the Chants a shoutout on SportsCenter.

The national attention hasn't gone unnoticed at the program.

Tulane announced earlier this month that fans would not be allowed for Friday night's game with SMU, but it did little to deter Paul Layne.

The SMU superfan made it to his 525th straight Mustangs game on Friday. He was the only fan in attendance at Yulman Stadium.

Oklahoma's dramatic 53-45 victory in the fourth overtime against Texas might have been a week ago, but the Sooners are still not over it. Just ask Brian Bosworth, Barry Switzer and Roy Williams. 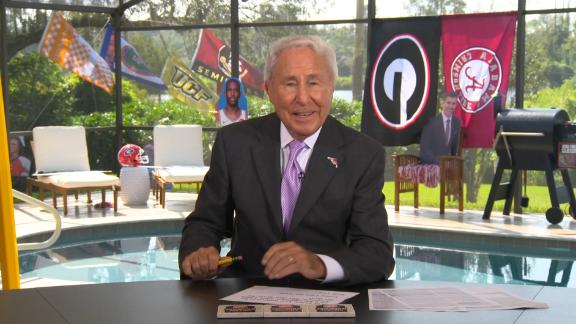 Corso's Pick: Georgia vs. Alabama
Lee Corso makes his prediction for No. 3 Georgia vs. No. 2 Alabama. 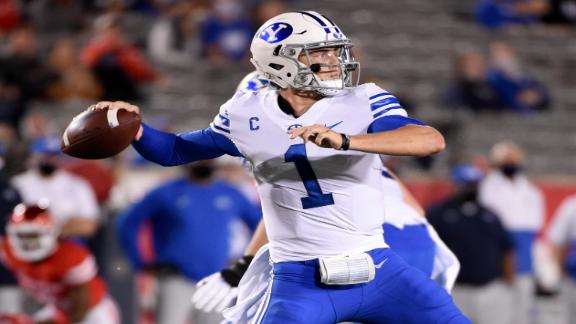 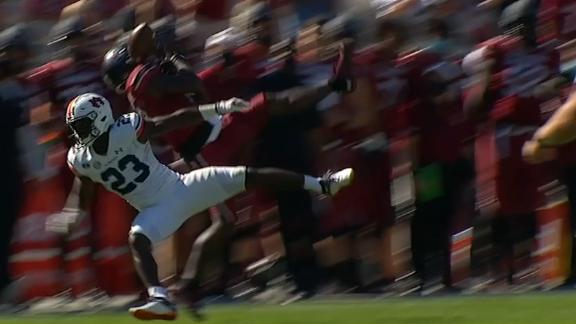 Smith makes sensational catch while falling to the ground
Shi Smith makes a ridiculous grab to advance South Carolina up the field. 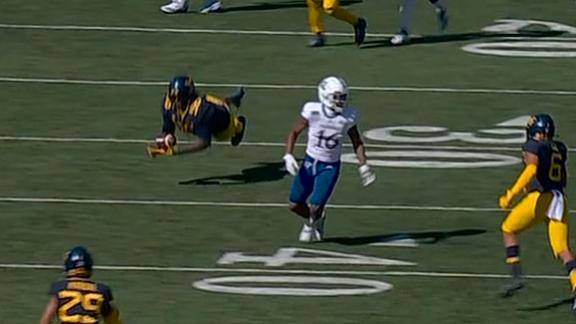 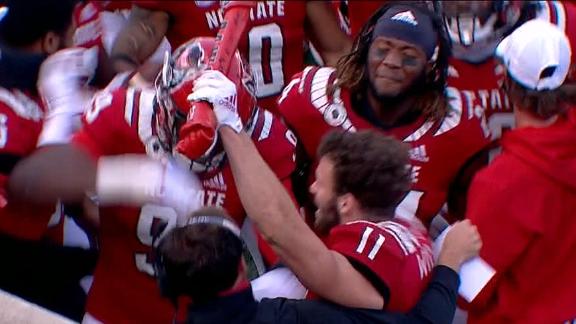 NC State's Wilson sprints to sideline to collect turnover bone
NC State LB Payton Wilson picks off a pass and then hurries over to the sideline to be rewarded with the Wolfpack's "turnover bone." 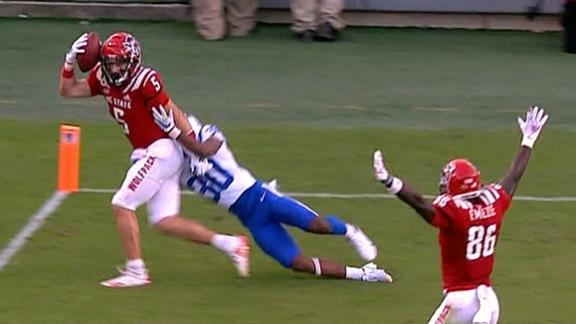 NC State WR makes incredible helmet catch on deflected pass
Bailey Hockman's pass to the end zone is tipped by a Duke defender, but Thayer Thomas reels in the deflection with one hand against his helmet for a touchdown. 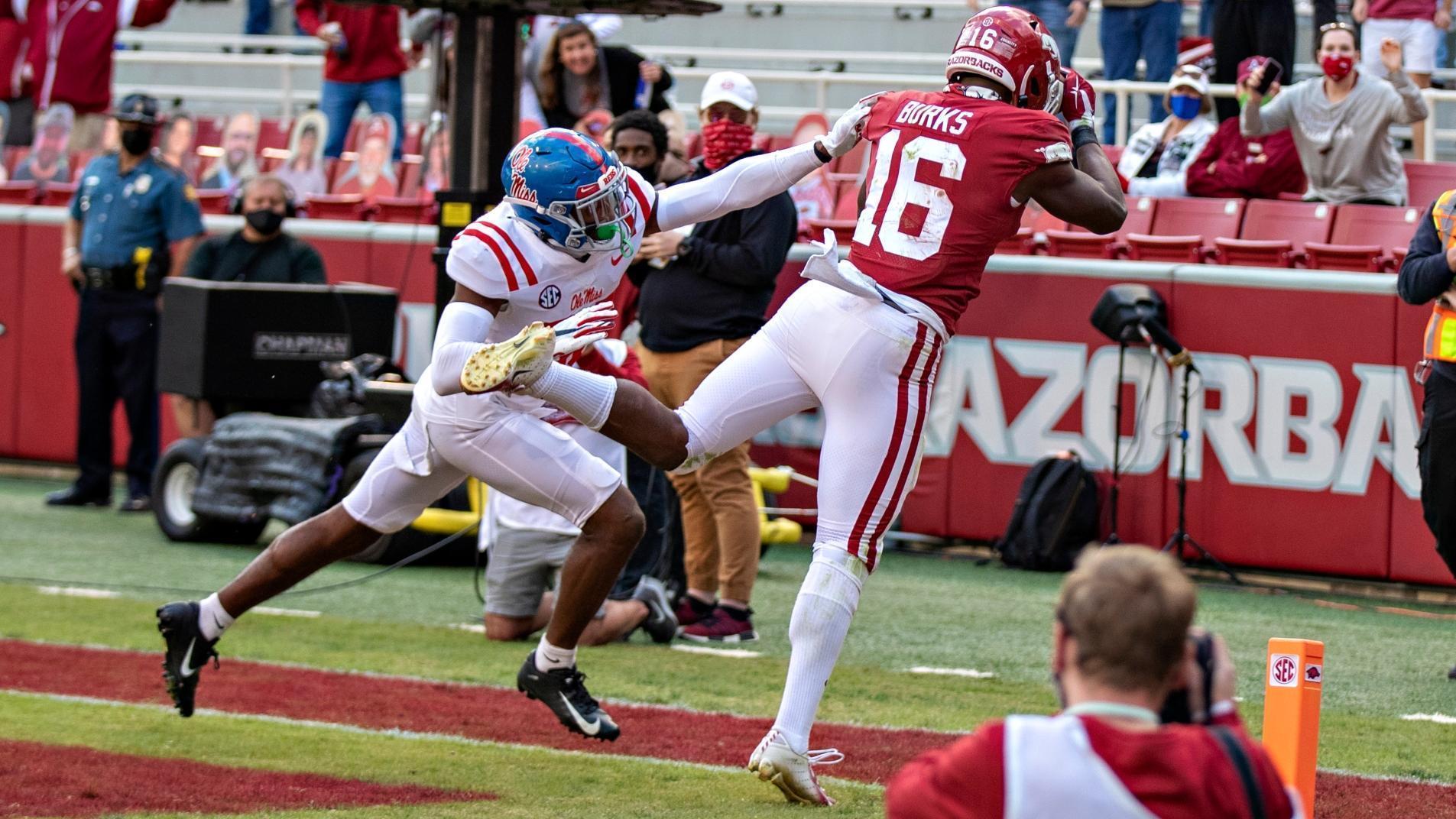