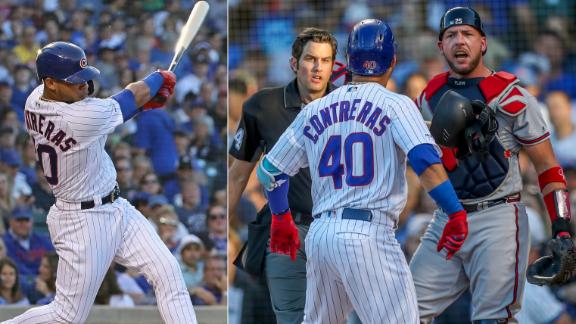 CHICAGO -- Willson Contreras wasn't happy with a called second strike in the second inning. He took his displeasure out on the next pitch, hitting it out of the park.

"It's fun, because they're good and we're good," Cubs manager Joe Maddon said. "Monday night at 7:05 (p.m.), and to have that kind of an attitude or atmosphere is outstanding. That's what baseball needs."

Jason Heyward added a solo homer for Chicago, which moved one game ahead of Milwaukee in the NL Central. Lester (7-5) allowed two unearned runs and struck out seven.

Tempers flared in the second inning when Contreras homered to right, giving the Cubs a 1-0 lead. Contreras turned to Braves catcher Tyler Flowers after the ball left his bat, and while rounding first base, gestured toward Atlanta's dugout and thumped his chest.

Contreras and Maddon downplayed the incident. Contreras was questioning a called strike that he felt was outside the zone.

"I just tell (Flowers) to do his job and I do mine," Contreras said. "To be honest, those pitches weren't even close to the strike zone. He got mad because I was talking to the umpire about that, and he jumped into the conversation."

Contreras and Flowers exchanged words as he returned to the dugout. Heyward escorted Contreras back to the dugout, and Teheran approached the third-base line.

The benches cleared, umpire John Tumpane warned both teams and players congregated on the third-base line. No blows were exchanged.

"I think it died down as soon as it was over," Braves manager Brian Snitker said. "It was just a couple of catchers going at it a little bit."

Baez singled and stole second to lead off the fourth before Contreras made it 2-0. Contreras' single glanced off shortstop Dansby Swanson's glove and ricocheted into center field as Baez raced home.

Teheran (5-6) was roughed up for the second consecutive start. He allowed six runs in four innings last Tuesday against the Mets.

Nick Markakis drove in two runs with a single in the sixth inning. Swanson hit a towering solo homer in the seventh off Tony Barnette, who made his Cubs debut after being activated from the 60-day injured list.

Atlanta lost for the sixth time in 20 games.

Closer Craig Kimbrel will pitch in another game at Triple-A Iowa on Tuesday. Then Cubs management will evaluate his progress. He could be activated later this week.

"There's certainly a chance that at the very end of this homestand or early on the next road trip we could be seeing him," president of baseball operations Theo Epstein said.

Cubs: RHP Brendan Morrow (offseason elbow surgery) was set to pitch a third bullpen session at the Cubs' training facility in Mesa, Arizona, on Monday. ... RHP Kyle Hendricks (right shoulder inflammation) tossed 15 pitches on Monday and is expected to throw a bullpen session later this week. Epstein said he could return by the All-Star break.