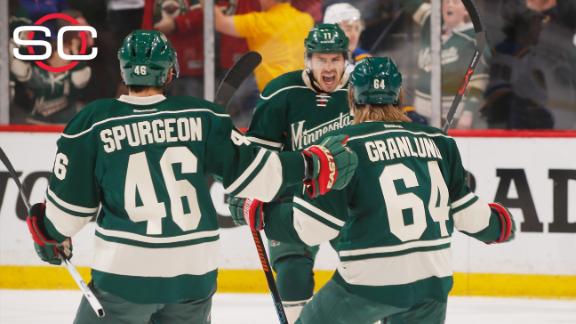 The starter in Games 1 and 2 against the Nashville Predators in the first round, Crawford was replaced after allowing nine goals in four periods. Rookie Blackhawks goaltender Scott Darling started Games 3-6. Crawford had started 57 consecutive playoff games for the Blackhawks before Game 3.

After Darling allowed three goals on 12 shots in the first period of Game 6 on Saturday, Crawford entered the game and stopped all 13 shots he faced as the Blackhawks rallied for a 4-3 win.

Quenneville said Crawford's play in Game 6 went into his decision to start him to begin the series against the Wild. Dates and times of the second round have not yet been announced.

"Great response in a very important game for us," Quenneville said at practice Monday. "All of a sudden, it was a tight game and the game was on the line. He did everything he could. It was a great win for him and for us. He's exiting the series on a real positive note.

"I'm sure it was not easy watching and doing everything he can to get that chance he got. He certainly put us in the position now. It's his net; let's go."

Crawford said Monday that he has moved past what happened in the first round.

"I think I've answered enough questions about that," he said. "It's done. It's done. We're moving on. Me and Scotty are both pushing each other. We want to push each other to be at our best. We're just going to do the same thing we did all year."

So will Crawford be on a short leash against the Wild?

"You don't think like that going into a game ... or a series," Quenneville said. "That's something we've never had to deal with before.

"But I'm fine with our goaltending situation and very confident Corey is going to get the job done."

Crawford admitted the pace of the play in Game 6 against the Predators took some time to adjust to after sitting out three consecutive games. He wasn't worried about being prepared for Game 1 against the Wild.

"I feel like I can get back at it," Crawford said. "We're going to have some tough practices here. I feel fine right now."

The Blackhawks have eliminated the Wild in the playoffs the past two seasons. Crawford started every game in both of those series.