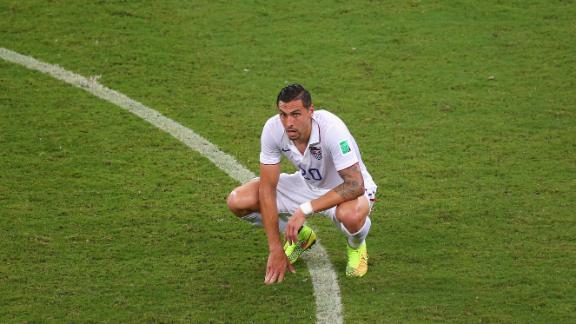 Ronaldo, the 2013 Ballon d'Or winner, has been a largely peripheral presence for Portugal during the current tournament, with his performances continuing to be hampered by a serious knee problem.

The Real Madrid player has provided just one telling moment of quality -- the cross from which substitute Silvestre Varela headed an injury-time equaliser in their second group game 2-2 draw with the USA in Manaus -- but has yet to come close to getting on the scoresheet himself.

This means the 29-year-old has still scored just twice across three World Cup finals, something which the Valencia defender Pereira told Marca he hoped would change in Thursday's make-or-break final Group G game against Ghana.

"[Cristiano] needs [a goal], it is what he is missing," he said. "It is very important for him to score another goal, to pick up confidence and to help our national team."

Ronaldo has been suffering for months with a tendinosis [chronic tendonitis] problem in his left knee, an injury which greatly hampered his contribution to the end of Madrid's 2013-14 campaign, and which some reports have claimed could now cause him even more serious issues in future.

Pereira followed the line set by Portugal coach Paulo Bento and other national team players by saying that the injury was not such a big deal as was being made out in the media.

"Cristiano is fine, he is fighting to do something, to score a goal," he said. "He needs a goal to grow his motivation, his confidence."

Germany and the U.S. look in control of Group G, with a draw in their meeting in Recife on Thursday sending both teams through. Portugal's goal difference of minus four means they are rank outsiders to qualify, but even still the former Benfica and Sporting Lisbon defender said it remained possible they could defeat the Ghanians and make the last 16.

"We have 90 minutes left and some final hope," Pereira said. "Difficult, yes, but not impossible. I have already seen many things happen in football."