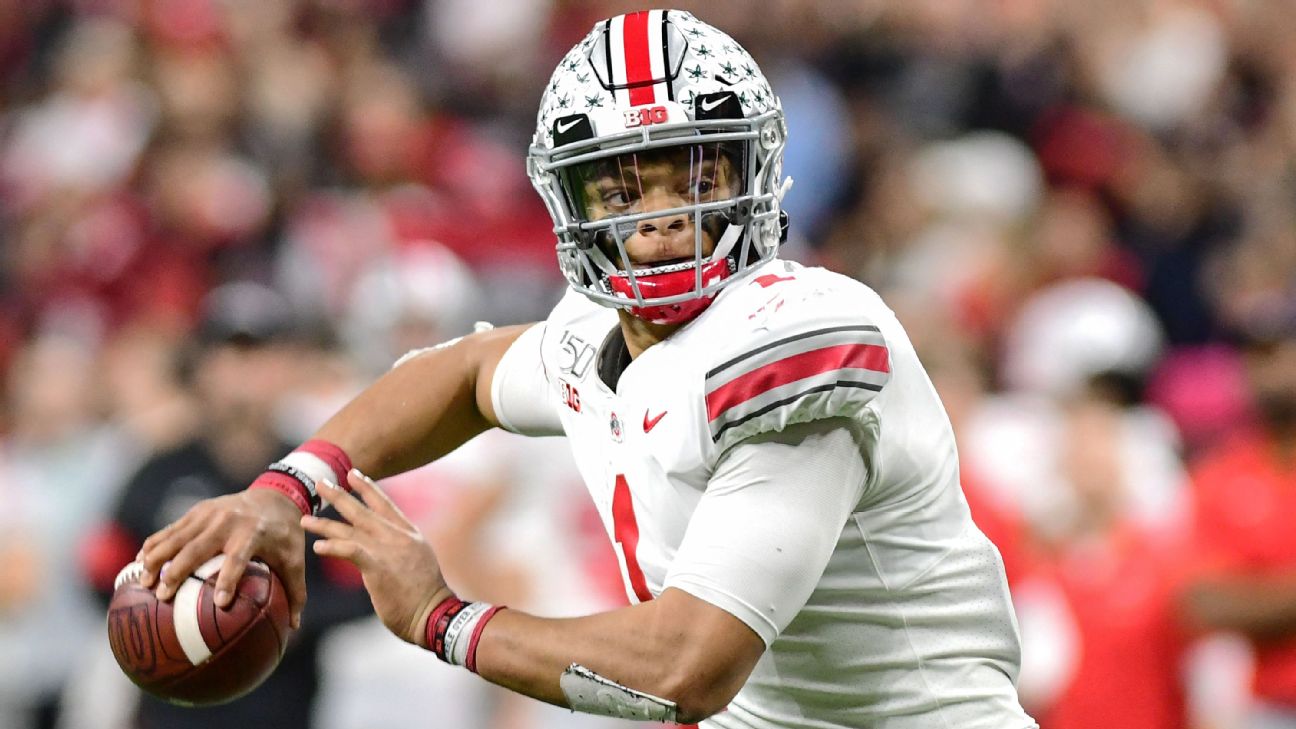 Now is when it really starts to get fun. We're down to 16 teams in ESPN's fictional NCAA football tournament.

We saw some upsets, clutch performances and exhilarating finishes in the first two rounds. But this is the point of the tournament when talent usually wins out ... but not always.

As a reminder, original seeds were based largely on ESPN's latest Football Power Index for the 2020 season. We've got some entertaining matchups ahead, so let's finish the football version of March Madness.

(1) Clemson 38, (4) Michigan 24: Coach Dabo Swinney loves to say that Trevor Lawrence is too focused on being great to be distracted by anything that doesn't matter. Well, he's certainly not distracted by the Michigan defense and hits 10 of his first 11 passes on his way to four touchdowns and 330 yards through the air in a convincing Clemson victory.

(2) Texas A&M 34, (11) Baylor 20: What a terrific tournament run by Dave Aranda and the Bears in his first season in Waco, Texas, especially given the exodus of defensive talent from the 2019 team. The Aggies take advantage of some of the newer faces on defense for Baylor in posting their third consecutive game of 30 points or more in the tournament and moving a game away from the final four.

(1) Clemson 27, (2) Texas A&M 24: It's the third meeting in as many years for these two teams, but this one carries loftier stakes than the two previous regular-season contests. The Aggies do a nice job of changing it up on defense and not allowing Lawrence to get into a rhythm, but an Amari Rodgers punt return for a touchdown is the difference for the Tigers.

(1) Ohio State 31, (4) Auburn 27: In a back-and-forth game with Ohio State quarterback Justin Fields and Auburn quarterback Bo Nix both leading their teams on pressure-packed scoring drives in the second half, it's a fourth-down stop behind the line of scrimmage by defensive end Zach Harrison that seals the game for the Buckeyes.

(3)Florida 28, (2) Texas 21: Florida quarterback Kyle Trask wasn't bashful earlier this spring when it came to talking about the Gators' chances of making the College Football Playoff. Of course, that's before we moved the format to a 64-team tournament, but his point nonetheless remains. Florida takes another big step in Dan Mullen's third season in Gainesville behind three touchdown passes from Trask.

(1) Ohio State 34, (3) Florida 28: It's always a party in Columbus when Ohio State beats up on an SEC team, especially in the postseason. The Buckeyes don't necessarily beat up on the Gators physically. It's an evenly matched game in the trenches, but Fields' ability to extend the play and make plays on the move wears on a Florida defense that can't get off the field during crucial moments in the second half.

(4) USC 37, (1) Oklahoma 35: There's no such thing as having too many good quarterbacks. And while Kedon Slovis and JT Daniels both have their moments during the 2020 season, it's Daniels who comes off the bench in the second half for an injured Slovis to lead Clay Helton to one of his biggest wins yet as USC's coach.

(3) Georgia 28, (10) Miami 14: It's not all that uncommon for a double-digit upstart in the NCAA tournament to run out of gas when it reaches the round of 16. That's what happens to the Hurricanes, who simply don't have any answers for Georgia's speed, explosiveness and athleticism on defense. The Dawgs hold the Hurricanes to 2-of-13 on third-down conversions.

(3) Georgia 33, (4) USC 20: The Dawgs lean on their defense to keep the game close until quarterback Jamie Newman and the offense start clicking in the second half. One of the Trojans' two touchdowns in the game comes on defense, and Newman passes for a touchdown and runs for another in the second half to send Dawgs fans into a raucous rendition of "Glory, Glory to Ole Georgia."

(1) Alabama 37, (5) Oklahoma State 21: One of the real coups for the Crimson Tide during the offseason, in addition to holding onto offensive coordinator Steve Sarkisian, was getting running back Najee Harris back for his senior season. And while Oklahoma State's Chuba Hubbard has better numbers coming into the game, it's Harris who takes over here with 200 rushing yards and three touchdowns.

(2) Penn State 27, (3) Notre Dame 24: This is one of those traditional matchups we as college football junkies would love to see played every year. Well, we get it in the postseason, and it doesn't disappoint. The Nittany Lions hold off a late charge by the Irish thanks to a strip sack and fumble recovery by Micah Parsons inside Penn State's own 20-yard line.

(2) Penn State 28, (1) Alabama 27: James Franklin has had the Penn State program right there on the cusp of playing for a national championship several times in the past few seasons. Close losses have tormented the Nittany Lions, but this time they turn the tables with a close win thanks to Sean Clifford's fourth-down touchdown pass to tight end Pat Freiermuth after Freiermuth returns to the game from an earlier injury.

(1) Ohio State 35, (1) Clemson 24: The Buckeyes are still seething over the defensive touchdown that was overturned on replay in the 2019 College Football Playoff semifinals. They get another shot at the Tigers this season, again in the semifinals, and put the game away early.

(3) Georgia 27, (2) Penn State 20: Kirby Smart knew the stakes when he took the Georgia head-coaching job in 2016. The Dawgs want championships -- national championships, to be precise. The combination of Newman's multidimensional ability at quarterback and a defense that's downright salty sends the Dawgs right back where they were in 2017: playing for a national title.

(1) Ohio State 35, (3) Georgia 31: In the new age of quarterback free agency in college football, you just knew we were going to get one of these matchups. Both teams have transfer quarterbacks who've had monster seasons, but one of those quarterbacks has a little extra motivation. Fields takes a pounding early from his former Georgia teammates, but keeps getting back up off the turf to lead the Buckeyes on a winning drive they will be talking about at the Ohio State University for a long time to come.
Report a correction or typo
Related topics:
sportsespnbaylor bearsohio state buckeyesoklahoma soonersgeorgia bulldogscollege footballoklahoma state cowboysnotre dame fighting irishtexas longhornspenn state nittany lionstexas a m aggiesauburn tigersclemson tigersdailyalabama crimson tidemiami hurricanesusc trojansflorida gatorsmichigan wolverines
Copyright © 2021 ESPN Internet Ventures. All rights reserved.
More Videos
From CNN Newsource affiliates
TOP STORIES