WLS
By Jessica D'Onofrio, Rob Elgas, Karen Jordan, Eric Horng and Laura Podesta
CHICAGO (WLS) -- Your eyes don't deceive you: The Chicago Cubs are in Cleveland for the first two games of the World Series.

The Cubs were on hand at Progressive Field for media day and to practice. Infielder Addison Russell reflected on the historic moment.

"It's just been a childhood dream to be in the World Series and here I am. I've only played in the league for less than two years and we have an opportunity to live it all, so it just speaks on the amount of, the type of team we have. Young, old, veterans and what have you, we all mesh together, we all come together and we have a common goal, and that was to get to this dance and now what we're here we can't stop here so we might as well win it all. And with this group of guys I think that that's a pretty big possibility," Russell said.

The Cubs are early favorites according to oddsmakers, but the Indians get home field advantage at the start of the series because the American League won the 2016 MLB All Stars Game.

Game 1 is set for Tuesday at 7:08 p.m. in Cleveland. Kenny Lofton will throw the first pitch at the World Series Game 1. Meaningful to both teams, Lofton played more than nine seasons over the course of his career in Cleveland, beginning in 1992, and set stolen base records with the Indians. In July of 2003, Lofton was traded from Pittsburgh to the Chicago Cubs and was with the team through the remainder of the 2003 season and postseason. Lofton is a native of East Chicago, Ind.

The first friendly wager was made between Sen. Mark Kirk (R-Ill.) and Sen. Rob Portman (R-Ohio) Monday, with Kirk wagering a case of Goose Island 312 and Portman betting a case of Great Lakes Octoberfest beer on the outcome of the games.

Progressive Field is ready and so are fiercely loyal Cubs fans. Craig Zacher paid $1,400 for a ticket to the game.

"I named my son after Ryne Sandberg. I'm a huge Cubs fan, so this is everything to me," Zacher said. "I think we're going to take this game three to one. Lester is going to pitch a great game."

Paul Freeman and Sandy Rollheiser took a road trip from the North Side.

"I can't tell you what it means to be able to be here, to see this team," said Rollheiser.

Ball-hawk Dave Davison said he drove six hours just to get to batting practice Monday, where he nabbed two balls. But Davison is best known for catching David Ross's 100th home run, and giving it back to him.

"He said 'Thank you, what do you want?' I said, 'Nothing, let's take a picture together.' I didn't even hit him up for World Series tickets," Davison said.

He will go to Wrigley Field as well this week, but then he'll head home where his 77-year-old father Tom is waiting for him. They will witness history together.

"In case it ends Saturday, I've got to be home with the old man to watch the game. Just can't miss it, something like that. He's waiting his whole life and so have I, so we've got to be together for it," he said.

Cubs superfan Wally Mulvaney has been to every single one of the last 32 World Series repping the North Siders by wearing a Cubs jersey and cap no matter who is playing.

"And I can imagine there will be more than one Cubs jersey in the stands in Cleveland this time than when I'm the only one there," he said.
He's right. Chris Labonte, a life-long Cubs fan, jumped at the chance to buy World Series tickets a few weeks ago from a friend.

"I have a friend who basically for a living he just buys and sells sporting event tickets and he called me up about two weeks ago and says, 'Hey, if Cleveland and the Cubs make it, I have box seats for you for $600 for you and five friends all you can eat, all you can drink' and I go, 'Ok, $600, sure!" Labonte said.

Two lucky fans caught a home run and ended up with a pair of World Series tickets.

Wilson Contreras' fourth inning home run Saturday night proved to be priceless for the father and son who wound up with the ball. Half an inning after catching it, Cubs security tapped on their shoulder with an offer.

"World Series tickets and a meet-and-greet with Contreras," Rahul Khare said. "I think it was a fair deal. He's a rookie and did a great job, he should have the ball."

While Rahul made the catch that got the tickets, his son Dylan won't let anyone forget his role in their good fortune.

"The glove is mine! So that's the point. It's my glove," Dylan said.

For everyone else, the price will be steep. The best deal right now requires a road trip; StubHub shows standing room tickets to Tuesday's game in Cleveland for $675 apiece. To stand Friday at Wrigley will set you back $1,900.

An actual seat in progressive Field is $898 at the cheapest. At Wrigley, even a nosebleed seat is going for $2,600. So even if you factor in the cost of hotel and gas, it's cheaper to watch the Cubs play in Cleveland you'll actually be able to sit down.

Experts say tickets for the series could be the most expensive in baseball history and may cost more than Super Bowl tickets.

"This is certainly off the charts in terms of anything we've seen in the ticket market. It's just the definition of a once in a lifetime experience," said Jesse Lawrence of Ticket IQ.

Tom Wilbeck was going from broker to broker Monday, doing his homework, willing to pay $20,000 so he can take his dad.

"It's not crazy at all. If you're a Cubs fan and you've grown up and gone through what this whole city as Cubs fans have had to deal with, it's not crazy," Wilbeck said.

The Cubs postseason ticket lottery could be the only way to buy tickets at face value unless you have season tickets.

The Cubs said thousands of tickets will be available through the lottery but an official number will not be released. As of October 12, more than 1.7 million fans had registered for the lottery.

If you score tickets to a game, where do you stay when you come to town?

Hundreds in Wrigleyville have joined the legion of hosts on Air BNB, hoping to provide a place to crash Friday, Saturday and Sunday for the right price. Listings are ranging from $1,000 to $5,000, which is shocking to some Air BNB hosts.

"I really didn't think about it to be quiet honest. My main goal is to treat everyone just normally regardless of what event it is," said host Oliver Aguilar.

Aguilar has been an Air BNB host for a year, renting out a bedroom in his Uptown apartment building for $100 a night. It's booked 20 days out of each month. He said it didn't occur to him to jack up the price for the World Series and his listing was snapped up right away, compared to the more expensive ones that haven't been rented yet.

"Typically I would have just a handful of people looking at it, but last weekend it jumped up to 100 views a day," Aguilar said.

Two men who there in 1945 to see it say what was a bittersweet memory is now just sweet.

We've all heard the number by now: 71 years since the last Cubs World Series. Two men who were here in 1945 to see it say what was a bittersweet memory is now just sweet.

A ticket stub from the last Cubs World Series game nearly ended up in the trash heap of history.

"I just saw it on the ground and I thought, 'I'd like to have a souvenir.' And programs were too expensive, so I didn't want to buy one of those. So I just picked the ticket stub up and had it," said Stan Rauch, vendor during the 1945 World Series.

Rauch was 15 when he sold 25-cent sodas during the 1945 World Series games at Wrigley Field.

Nick Paolella, 81, was also there for the World Series thanks to tickets from his neighbor, Cubs outfielder Andy Pafko. Seventy-one years after witnessing history as a 10-year-old, Paolella, a season ticket holder, will be watching another Wrigley World Series.

What on fan discarded is now a treasure to Rauch, and so it goes for a ball club that's picked itself off the ground.

Rauch, the year before the 1945 World Series, moved here with his family from Cleveland. He grew up an Indians fan. But this World Series? His loyalties are clearly with the Cubs.

The Chicago Cubs will not be offering Chicago aldermen the chance to buy World Series tickets at face value, several aldermen confirmed Monday.

Aldermen had been able to purchase tickets at face value for the previous playoff rounds. The decision by the Cubs comes after the Board of Ethics sent out new guidelines stating that accepting the offer could possibly violate a ban on elected officials receiving gifts valued at more than $50.

The lion statues outside the Art Institute sporting Cubs hats with the team in the World Series.

The lion statues outside the Art Institute of Chicago are now sporting some Cubbie blue.

Workers placed Cubs baseball hats on the lions outside the museum. They were also decorated with Blackhawks gear during the Stanley Cup playoffs in 2013. 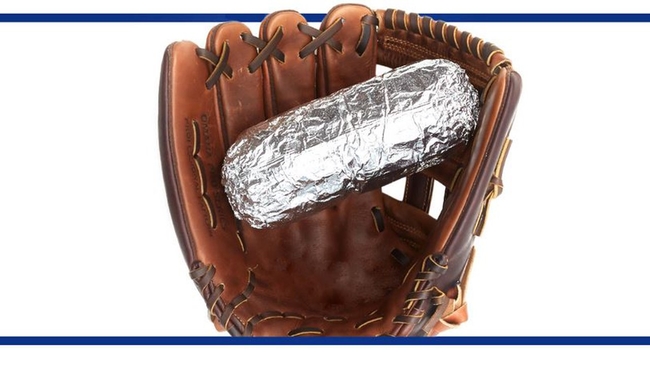 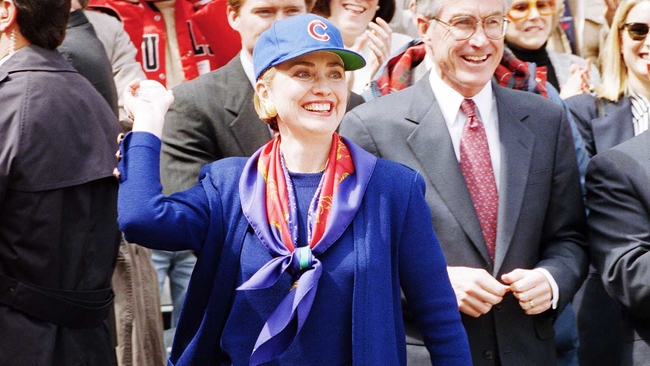 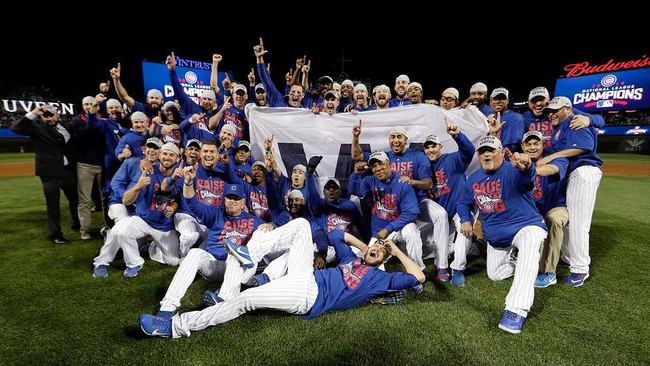 The best pitching performance ever for all 30 teams 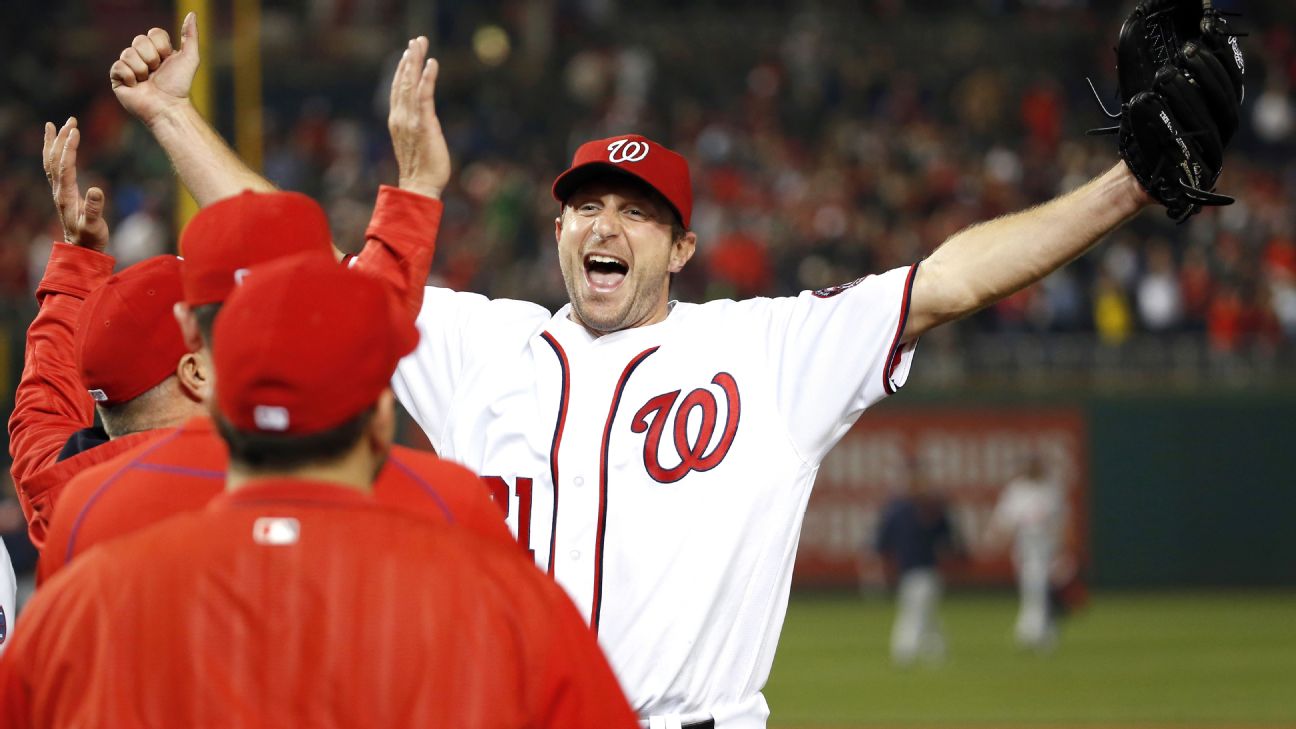 How to watch Strikeout Saturday: Classic 20-K games on ESPN 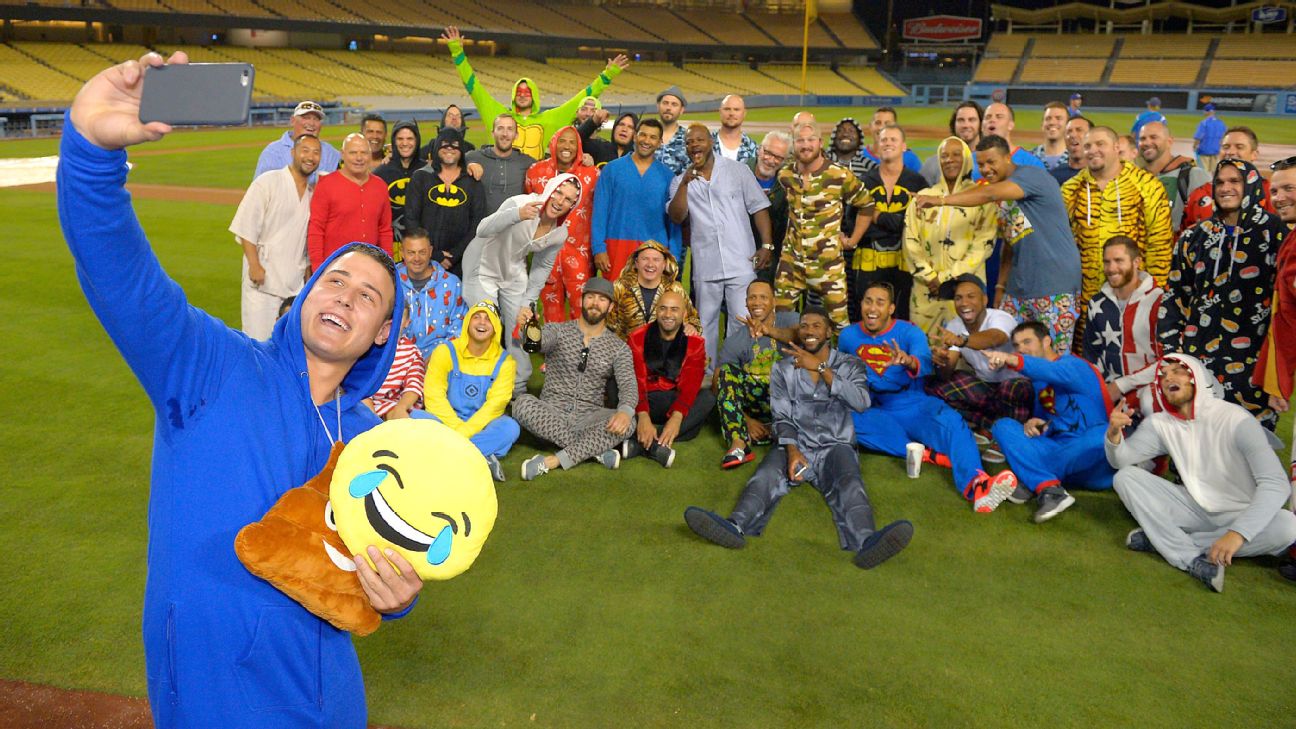 The best behind-the-scenes MLB moments we ever saw