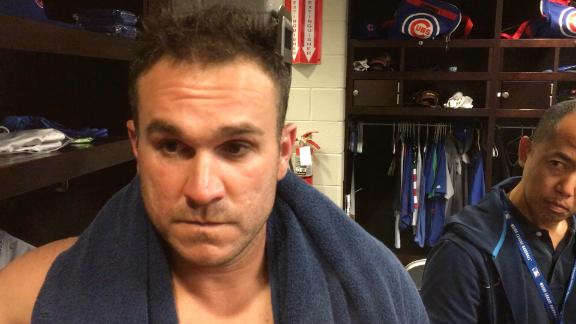 "That's the reason they were running left and right today, because they [Arrieta] were slow to the plate," Montero said after the Cubs' 6-1 loss. "Simple as that. It's a shame it's my fault because I didn't throw anyone out.

"It really sucked, because the stolen bases go on me. But when you really look at it, the pitcher doesn't give me any time, so yeah, 'Miggy can't throw anyone out,' but my pitchers don't hold anyone on."

Opposing baserunners are 31-for-31 in steal attempts against Montero this season, a total that includes the seven in four innings on Tuesday by the Nationals. Trea Turner had four steals with Arrieta on the mound and Montero behind the plate.

"I don't pay attention to the catcher too much," Turner said. "More so [the] pitcher. I knew that Arrieta was slower to the plate, so I just wanted to be aggressive and make sure I was taking good chances."

Though Cubs teammate Jon Lester has earned more headlines for his issues with the opposition stealing bases, Arrieta has had his own problems over the years. Last season he ranked fourth in the National League with 23 stolen bases against. He was fourth in 2015, as well.

"When Turner is on the bag, you try and be mindful of that," Arrieta said of the NL steals leader. "Vary your holds. But he's fast. He's a factor. Any time he's on. That's why you try and do your best anytime he's on base.

"I don't care who's behind the plate, he's a threat. And he's shown that. You're better off getting him out."

Arrieta spoke to reporters before Montero did, so it's unclear whether he knew where his catcher would lay the blame.

Montero was behind the plate for Arrieta's first no-hitter in 2015, but the catcher's skills have declined. His average "pop time" (2.11 seconds) to second base ranks second worst among all catchers.

"As soon as you catch the ball, you see the guy at second base and you try to be as quick as possible," Montero said. "Next thing you know, you don't have anything on it or you make a bad throw. There's a couple times I didn't throw because there is no time to throw anyone out there.

"It's frustrating for a catcher. It really hurts me. I feel like I can still throw. I have a good arm. My arm feels great. I just tried to be quicker, try to be perfect. To make those two together it's hard to do."

Montero was asked whether he and Arrieta have discussed their issues.

"We talk every year in spring training, but it's frustrating because no one really cares about it," Montero said. "Perfect example:Salvador Perez, best throwing catcher in the game, and Jason Hammel has only 10 stolen bases and one caught stealing. So what does that tell you? They don't give [Perez] a chance to throw someone out?"

It's not the first time Montero has made public comments that could land him in hot water.

On the day of the Cubs' parade to celebrate their World Series championship, he was critical of how manager Joe Maddon used him throughout 2016, while also questioning communication between the two. A spring training spaghetti dinner cleared the air.

On Tuesday, Maddon also addressed reporters before Montero did, and Maddon pointed toward Arrieta, as well.

"It's about time to the plate," Maddon said. "He's a little bit slow. ... It's something he works on. There are times he's quicker and better to work with. The best [antidote] is to keep the guy off the base."

Arrieta wasn't able to keep the fastest of the Nationals off base, and the Cubs paid for it, particularly their catcher.

"The numbers always go to the catcher, so I'm the bad guy there," Montero said. "It really sucks. Have to take full responsibility, but on the other hand, I would like a little help."

The seven steals are the most the Nationals have tallied in a single game since the franchise moved to Washington in 2005 and are tied for the franchise record, most recently accomplished by the Montreal Expos on May 7, 1986.