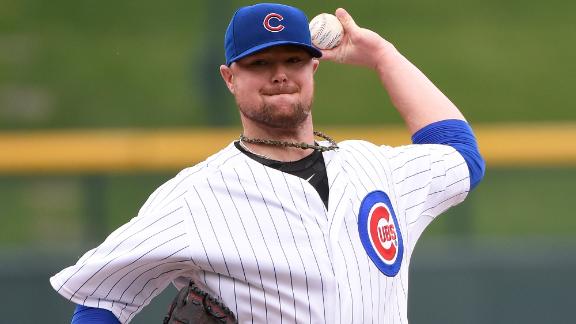 MESA, Ariz. - Chicago Cubs pitcher Jon Lester could be "restricted" on Opening Day as he continues to build his pitch count up after missing a recent spring start due to arm fatigue. Lester didn't pitch Saturday against the Seattle Mariners but is still on pace to throw April 5 when the Cubs host the St. Louis Cardinals.

"He might somewhat be restricted regarding length in that first game," manager Joe Maddon said Tuesday.

Maddon indicated that Lester has already reached about 70 pitches in a start this spring but would be limited to 60 in his next appearance on Thursday. His final tuneup next week won't go for more than about 80, which means don't expect him to reach 100 on Opening Day. The Cubs are planning on pitching him in minor league games this week and next to control the environment.

"I'm not concerned who he pitches against," Maddon said. "He just needs somebody standing up there so he gets the requisite number of pitches thrown. If he says he feels good, then I feel good."

In a spring minor league game, teams can simply end an inning whenever they want. Lester threw his normal bullpen session on Monday after missing his start on Saturday.

"Everything is fine," Lester said Tuesday. "At the time it felt like the right thing to do. There is no reason to push yourself."

The Cubs have two off-days during the first week of the season, so using the bullpen should not be an issue. Lester signed a six-year, $155 million deal in the offseason after reaching 200 innings in six of the last seven seasons, however, he might not have the arm strength to go the distance in his first start.

"We want to be able to control the number of pitches," Maddon said.