The Cubs became the second visiting team to celebrate a title at Busch Stadium III. The 2009 Los Angeles Dodgers won the NLDS at St. Louis.

Lackey (12-11) retired the final 10 batters he faced. The former Cardinal struck out three and gave up two hits and two walks.

Cardinals starter Michael Wacha needed just 60 pitches to cruise through the first six innings, striking out eight, before running into trouble in the seventh. Anthony Rizzo and Kris Bryant started the inning with singles and Russell drove a 2-1 pitch over the left field wall to give the Cubs a 3-1 lead.

Wacha (12-9) was chased after allowing the first six Cubs to reach base in the seventh. Jason Heyward and Tommy La Stella had RBI doubles as the Cubs sent 10 batters to the plate against three St. Louis pitchers.

Paul DeJong's single scored Jedd Gyorko to give the Cardinals a 1-0 lead in the second.

Former Cub Dexter Fowler came to the plate with the bases loaded as the tying run in the eighth, but Carl Edwards Jr. got him to fly weakly to right field, ending the Cardinals' threat.

Chicago Mayor Rahm Emanuel released a statement after their win, saying, "Congratulations to the Division Champion Chicago Cubs! As the calendar prepares to turn from September to October, the Cubs' magic run continues and playoff baseball is coming back to Wrigley Field. This team has given fans so many memories over the past few seasons, and Chicago can't wait to see what's in store next! Chicago is ready to #FlytheW!"

Rizzo was hit by a 99 mph fastball on the first pitch he saw from Wacha with two outs and nobody on in the first. Rizzo was visibly upset after getting hit, throwing his bat over-handed towards the Cubs' dugout.

Earlier in the day, Cardinals OF Tommy Pham told media that he believed he was hit by a pitch on purpose by the Cubs in Tuesday night's game.

Both batters were hit in the ribs.

Cardinals: RHP Lance Lynn (11-8, 3.47 ERA) could possibly be making his final start as a Cardinal after six seasons with the club. Lynn, an unrestricted free agent, is 6-6 with a 4.18 ERA in 18 career appearances against Chicago. 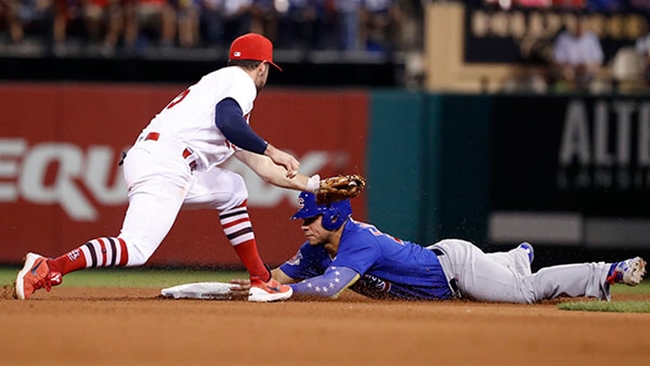