Cubs fans celebrate ahead of historic trip to World Series 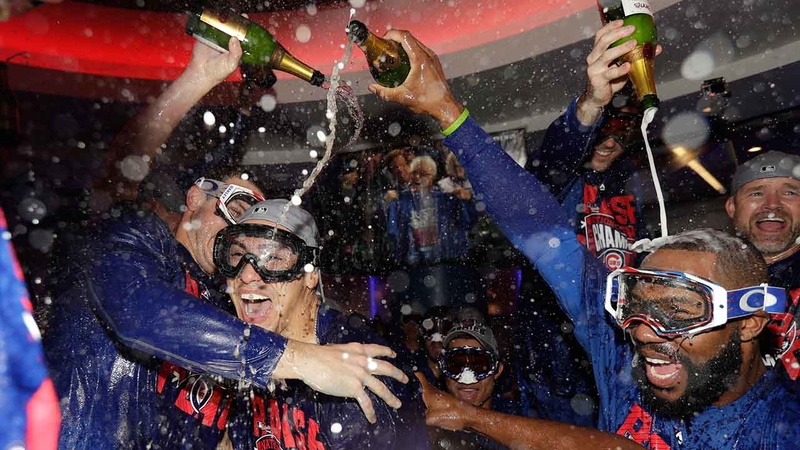 CHICAGO (WLS) -- The Chicago Cubs made history Saturday night, and then took off Sunday evening for Cleveland where they will play Game 1 of the World Series.

About 300,000 fans celebrated in the streets outside Wrigley Field for hours after the Cubs trounced the Los Angeles Dodgers, 5-0, in Game 6 of the National League Championship Series. This is the team's first World Series in 71 years.

The Cubs face the Indians in Game 1 of the World Series on Tuesday.

The Indians are also thirsty for a title. They are looking to end their own 68-year title drought.

Fans scrambled for Cubs gear Sunday, but the big search was for tickets.

World Series tickets are cheaper for Game 1 and Game 2 this week in Cleveland than games in Chicago.

In Cleveland, prices for standing room only tickets were around $800 on StubHub on Sunday. In comparison, similar tickets at Wrigley for Game 3 were going for more than $2,200.

On Saturday, Wrigley fans everywhere erupted into excitement after the win.

"I was so loud last night my wife had to throw me downstairs to the basement I was up jumping, yelling, scream. She said, 'Please go down, you're scaring the dog,'" said fan Tronie Sumait.

On Sunday, a steady stream of fans visited Wrigley, taking pictures in front of the Harry Caray statue and selfies around the stadium.

Early Monday, the Art Institute of Chicago plans to install Cubs batting helmets on the iconic lion statues outside the museum on South Michigan Avenue.

Other rowdy fans climbed the pole of a portable police surveillance camera but celebrations were mostly peaceful.

Nine people were taken to hospitals.

A few drones were spotted around the park during and after the game, officials said. "The City reminds fans and residents that using drones in public spaces in Chicago is illegal, and anyone caught using one will be arrested," according to a statement from the city's Office of Emergency Management & Communications.

Some White Sox fans are reluctantly rooting for the Cubs.

"We are Sox Siders, but we wish the Cubs luck", reads one sign on the South Side.

Many are happy for the other Chicago team. But White Sox pride is still strong, even among the most holy.

"Father Tom said 'Mass has ended, go in peace.' And he walked to the back of the church and as we walk out, he's like "Let's go Cleveland,'" said Sox fan Ann Elsworth on Sunday.

In the Canaryville shadows of the Cell, there hangs "L" flags, which as one Sox fan explains is "for when they lose, hopefully in six."

The South Side Cubbies are keeping a low profile. Tucked in the backyard of Jim Goga's home is a big Cubs flag, which is kept back there because "my friends take it down and put White Sox stickers all over it."

He said his friends aren't happy for his teams win. Why should they? He rooted against the White Sox in 2005 for every game.

Cubs gear commemorating the team's victory Saturday night went on sale almost immediately as fans picked up anything that had to do with the Cubs.

At Dick's Sporting Goods in Lincoln Park, fans began to trickle in to get their piece of Cubs' history as the store opened at 7 a.m.

"Got his little sister a shirt, we're getting his friend a shirt, we got the hat, everything. We're ready," said Nicole Coleman.

"We are going to Game 1," said Craig Singer. "We're booked and we will be on the road on Tuesday so we're very excited. Four more wins."

"It was an emotional moment for most Cubs fans," said Johnny Burbano. "I got really choked up, I am getting choked up now. It's something extremely special."

First Lady Michelle Obama tweeted, "Way to go @Cubs!! My Dad is the reason I'm a true Cubs fan. He'd be so proud!"

James responded,"@DwyaneWade Absolutely!! We're placing a nice bet and more on this one my friend! #WorldSeries #RallyTogether."

@DwyaneWade Absolutely!! We're placing a nice bet and more on this one my friend! #WorldSeries #RallyTogether

At long, long last, it's true: Either the Chicago Cubs or Cleveland Indians will win the World Series.

The matchup between teams that forever waited till next year - next century, really - is finally here.

The Cubs are ready to sweep aside the Curse of the Billy Goat and the specter of Steve Bartman. And make up for the near-misses by Cubs greats such as Ernie Banks, Ron Santo and Billy Williams.

"Obviously we know that it's something that's going to be talked about with the history of the organization," pitcher Jake Arrieta said.

"But it's really not something we focus on at all. So we just kind of disregard it and go out and play," he said.

The Indians also a past full of failure and frustration. Their title drought dates to Bob Feller, Lou Boudreau, Larry Doby and 1948, trailing only the Cubs for the longest wait in the majors.

In 1997, Cleveland was three outs from winning the championship when closer Jose Mesa blew a one-run lead in the bottom of the ninth inning of Game 7 at Florida. An error by sure-handed second baseman Tony Fernandez doomed them in the 11th.

Like the Cubs with Bartman, the spectator who infamously deflected a foul ball at Wrigley during the 2003 NL playoffs, the Indians also have a prominent fan. It's John Adams, the man who has been beating a drum at most every home game for more than four decades.

Soon, another city will be celebrating. Maybe next week, maybe next month, with Game 7 scheduled for Nov. 2.

A pair of big cities, one on Lake Michigan, the other on Lake Erie, waiting ... and hoping to end the wait.