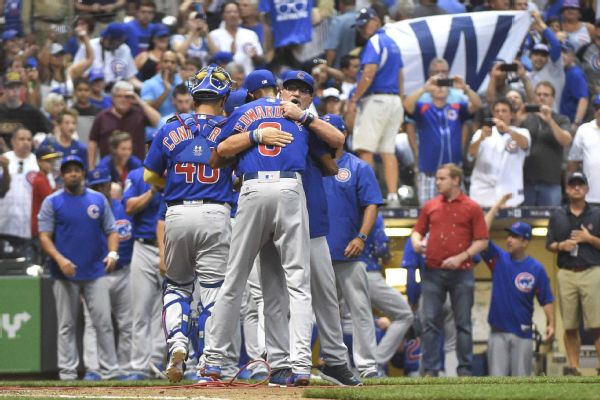 MILWAUKEE -- With a third consecutive postseason appearance in sight, the Chicago Cubs have four games in St. Louis beginning Monday with a chance to clinch the Central Division against their archrival Cardinals.

They'd like nothing more than to do it in a place that has haunted the franchise for a very long time, and they should get their chance, considering their magic number is just two after a 5-0 win over the Milwaukee Brewers on Sunday.

"It would be nice to do it there," Ben Zobrist said after the game. "I'll just say that."

"We intend to clinch there. For a lot of the guys that have been around here for a long time, it's going to be very satisfying."

The Cardinals have long been a thorn in the Cubs' side, but the roles have been reversed the past couple seasons. Now it's St. Louis that is hoping to squeeze into a wild-card berth, while the Cubs are setting themselves up for another long postseason run. The defending champions put themselves in a great position by beating the Brewers in three out of four games this weekend.

"It's a big series," Zobrist said. "This series, as John Lackey said, 'This is not a small series, boys.' We knew it was a big one here in Milwaukee. It will be another big one in St. Louis."

The Cubs have seen St. Louis celebrate in their presence both at Wrigley Field and at Busch Stadium. Now they intend to be the ones popping champagne.

Zobrist added: "It's the playoffs already for this team. We're already thinking that way. It's a matter of wrapping up the division in the next few days and then playing well going into the postseason. We're in postseason mode right now, and we intend to continue that for the next month."

Manager Joe Maddon was less forthcoming about his desire to clinch in St. Louis but plenty effusive about his team's play. The four-game series against the Brewers had a playoff vibe to it, especially considering that the first three games were decided in extra innings. But Sunday's complete-game shutout by Jose Quintana basically buried the upstart Brewers and reminded everyone who is in charge in the Central Division of the National League.