Cubs' Javier Baez out with thumb injury suffered during slide 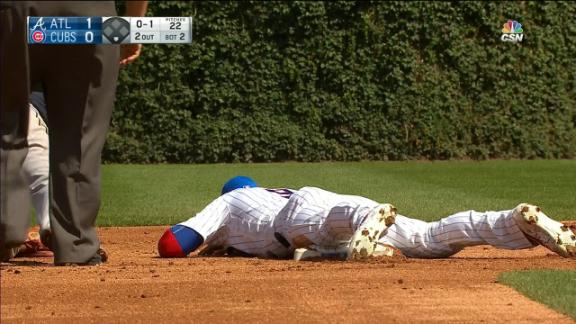 PITTSBURGH -- Chicago Cubs infielder Javier Baez thinks he'll be in the lineup on Tuesday after being scratched from Monday's game because of a sore thumb. Baez, 25, left Sunday's game against the Atlanta Braves after a hard slide into second base, where his head hit the knee of a defender.

Initially, Baez was removed because of blurry vision, but on Monday it was his thumb that was bothering him. He was asked how he was feeling.

"Normal, really," Baez said. "Everything is good. My thumb is kind of jammed a little bit. I'll take a day off and ready to go [Tuesday]."

The Cubs are already thin at the shortstop position after Addison Russell experienced a setback in his recovery from a case of plantar fasciitis recently. He's likely out the rest of this month, making minor league journeyman Mike Freeman the only other natural shortstop on the roster after Baez. He'll start on Monday, but the Cubs are hopeful it's just for the day after Sunday's scary moment.

"I was seeing dark, after the contact, from my left eye for a few minutes, then it was back to normal after 15-20 minutes," Baez said.

Baez was checked out by doctors in Chicago then joined the team in Pittsburgh on Monday morning. He was in the starting lineup but scratched shortly after it was announced. Baez had started every game since Aug. 3, when Russell went down.