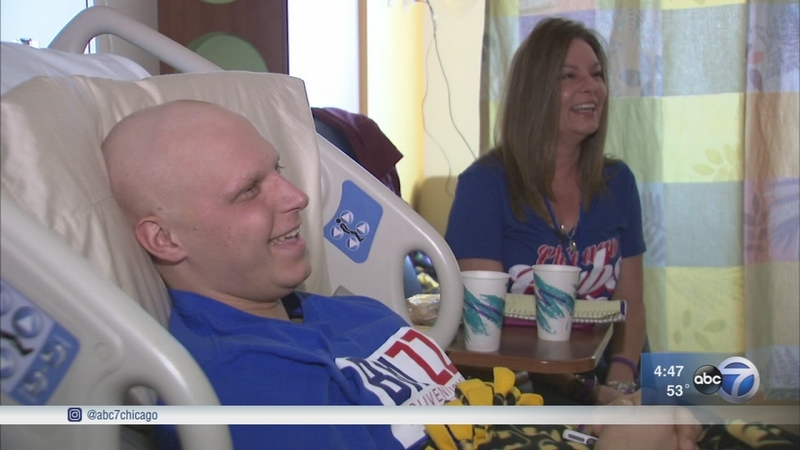 As Anthony Rizzo plays Game 1 of the World Series Tuesday night in Cleveland, the Cubs player has a cheering section at Lurie Children's Hospital.

"He comes in and we all say 'Anthony's here!" said Allison Parise, a Lurie nurse.

Eight years after beating Hodgkin's lymphoma, Rizzo has cheered on some of his youngest fans who also are patients at Lurie.

"He sits right down with the kids, interacts, gives them a stuffed animal, a hat, an autograph. And he wants to know how they are doing, what they're doing and why they are here," Parise said. "He lets them know 'You can do this. I was here, too, and I can do this.'"

Naperville teenager Justin Wegner is in Rizzo's shoes. He was forced to put his college baseball career on hold to battle his own cancer diagnosis.

The reality has rocked his family, who has used Rizzo's story as inspiration and hope.
Rizzo, along with fellow Cubs player Kris Bryant, have shown Wegner direct support from the Cubs clubhouse.

"I keep the sign he sent us in my room and I look at it every day. Just knowing people like that are thinking of you is really cool," Wegner said.

"For a kid that has had to divert his life path for a while, it's nice to be noticed," Dad said.

"I think we have a unique bond with everything in our past and what we've been through and just talking to him through the years and what kind of inspiration this guy is to other people, not just on the field, but off the field, and what he's been able to do in the Chicago community and the community back home in Florida," said Cubs player John Lester. "For me, that's the cool thing. I look up to him on that."
Related topics:
sportslincoln parkhealthworld seriescleveland indianschicago cubscancer
Copyright © 2021 WLS-TV. All Rights Reserved.
TOP STORIES
Teen killed in Chatham shooting, CPD says
Body found confirmed to be Gabby Petito, death ruled a homicide
Palatine dog attack victims sue owner, village after 3rd attack
Dozens of Oswego school bus drivers call out of work
Willie Garson, known for 'Sex and the City,' dies at 57
Boys, 15 and 14, wounded in Hyde Park shooting
Chicago Weather: Cool, windy with lake effect rain Wednesday
Show More
2 more arrested in IL for Jan. 6 US Capitol insurrection
Benet Academy hires coach after deferring job offer over gay marriage
McHenry mom shares story after nearly dying of COVID while pregnant
US Surgeon General discusses booster shots, health care worker burnout
'Paradise Square' musical set to debut in Chicago
More TOP STORIES News