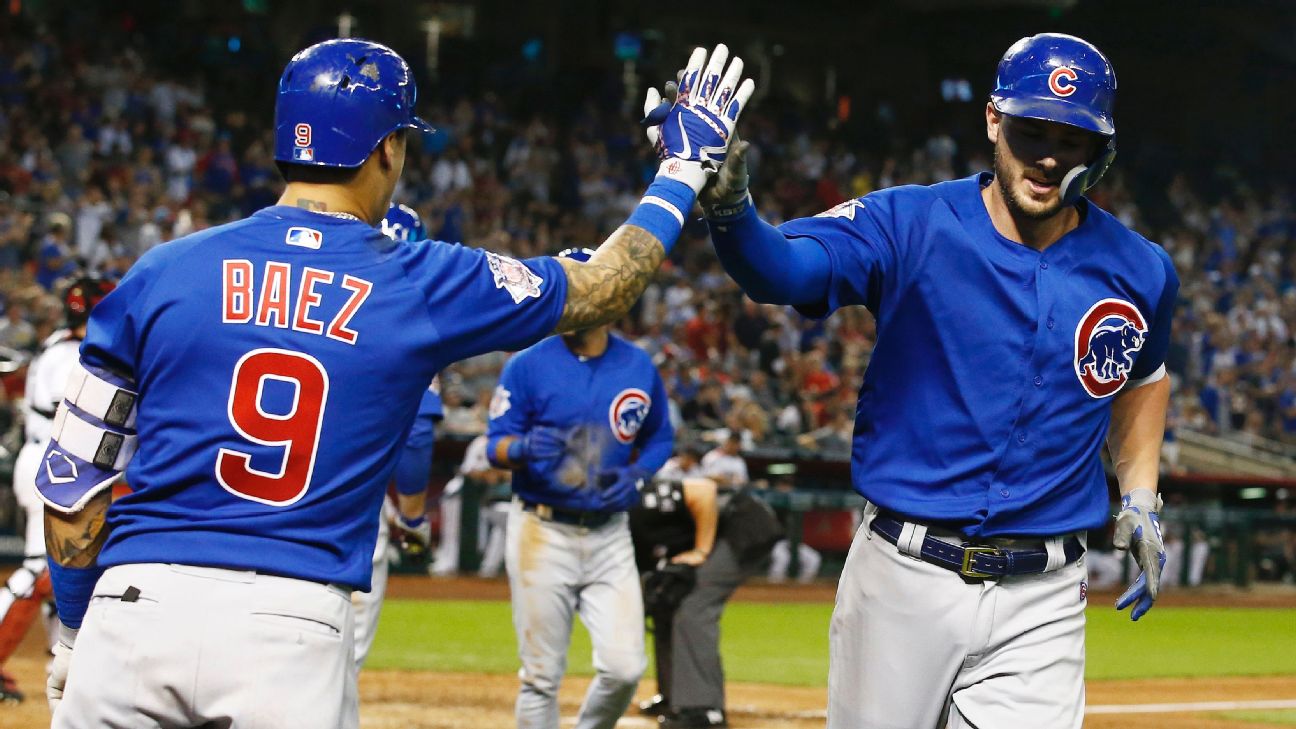 PHOENIX -- The playoff formula finally came together for the Chicago Cubs. Even if it was for just one game, during the busiest stretch of any team in baseball this season, the Cubs reminded the National League what they're capable of.

And it was a thing of beauty on Monday night, thanks mostly to starter Kyle Hendricks. He's likely to get the ball in Game 3 of a postseason series, but as he has done many times in his career, he threw like an ace in shutting down the fading Arizona Diamondbacks 5-1, while just missing out on a complete game.

"You see bad swings by good hitters" is how manager Joe Maddon described it afterward.

Hendricks had it going, as he induced a swing rate of 58 percent, the highest in two seasons for him. Also, according to research by ESPN Stats & Information, his 25 first-pitch strikes were the second most of his career. And his changeup was devastating, as he struck out seven Diamondbacks on that pitch alone. Imagine that Kyle Hendricks in a playoff series, following Jon Lester and Cole Hamels.

Cubs fans can begin to dream that dream, as the team reduced its magic number to win the NL Central to 10.

"We've been waiting for a little roll to happen," Hendricks said. "It's nice for us to be coming all together."

Though it was a magnificent performance, a well-pitched game by the Cubs isn't exactly headline material these days. The real narrative on Monday -- and what might have meaning next month -- is that some of the Cubs' bigger stars showed up in the box score, namely former MVP Kris Bryant. He was 2-for-3 with two opposite-field hits, including his first home run since July 20. The majority of his time between then and now was spent on the disabled list with a bum shoulder. Bryant could just now be starting to feel like his old self again.

"We all know what KB can do here," teammate Javier Baez said. "It's not the way he's used to swinging. He's still getting used to it. I know he's going to hit. Having him in the lineup, it changes how the other team pitches to us. They have to pitch to him, [Anthony] Rizzoor me, or whoever is in between."

Bryant is adjusting, but as the at-bats have piled up in his return, he's looking more and more like the dangerous hitter and on-base threat the league knows him to be. With an offense that has struggled throughout the second half, a productive Bryant can make the Cubs that much better.

On Monday, they eventually got to Patrick Corbin, who looked really good for the first few innings of the game. But the big three came through for the Cubs, as Baez homered to go along with Bryant, while Rizzo knocked in a run, as well. Finally, the Cubs offense put up some crooked numbers, scoring five runs in a game for the first time in more than a week. They've been grinding at the plate for so long -- it was consecutive day No. 28 at the park for them -- that five runs felt like 10.

"Up and down our at-bats definitely showed improvement against quality pitching," Maddon said.

As much as the Cubs have been winning games with the end of their roster, especially in the bullpen, a long playoff run obviously has to include contributions from their star players like they got Monday. Some have been missing in action at times, but Baez, Rizzo and Bryant reminded everyone what the possibilities are.

"When things get tough, we show up and grind and focus a little more," he said. "We trust each other in here. We know what we need to do to get the job done.

"It was just a matter of time, like what you saw today."