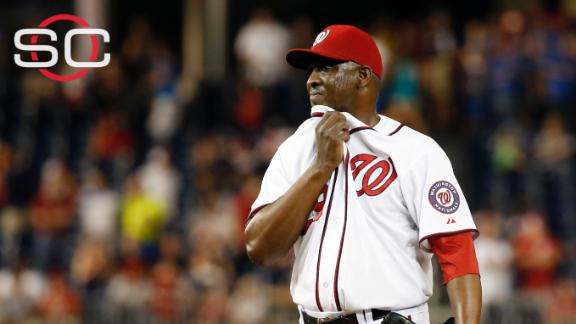 The Chicago Cubs have agreed to terms with free-agent relief pitcher Rafael Soriano on a minor league contract, the team announced Tuesday.

The 35-year-old Soriano began the 2014 season as the closer for the Washington Nationals and converted 22 of 24 save opportunities with an 0.97 ERA before the All-Star break. After that, though, he blew five of 15 save chances, and he lost the job to Drew Storen.

Soriano has 207 career saves over 13 seasons. He also has previously pitched for Seattle, Atlanta, Tampa Bay and the New York Yankees.

The contract could lead to a reunion for Soriano and Joe Maddon, who was the manager in Tampa Bay when the All-Star right-hander had 45 saves for the Rays in 2010. Soriano has three seasons with at least 40 saves.

"Had a great time with him," Maddon said over the weekend before the Cubs signed Soriano. "Had a great season down there. He's very good."

The Cubs have recently been using a closer-by-committee approach with Hector Rondon, Jason Motte and Pedro Strop. All three earned saves in last weekend's series against the Nationals.

Jesse Rogers of ESPNChicago.com and The Associated Press contributed to this report.