Cubs to start Kyle Hendricks in Game 1 vs. Nationals 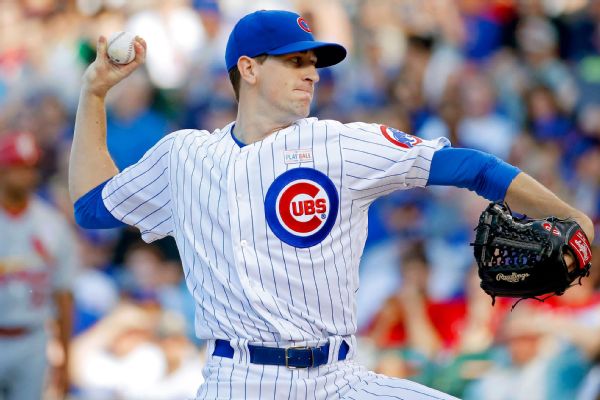 Hendricks will be followed in the rotation by lefty Jon Lester,andJose Quintana will make his postseason debut in Game 3 at Wrigley Field on Monday. Former Cy Young winnerJake Arrietawill pitch Game 4, if necessary, as he continues to recover from a hamstring strain.

"We moved Jake to the back just to make sure we give the leg as much time as possible to heal," Maddon said.

Hendricks will start a Game 1 for the first time in his career, but he's no stranger to big moments. He started the Cubs' Game 6 clincher in the NLCS last year against the Dodgers and then Game 7 of the World Series.

"Anyone on this staff could make this start," Hendricks said. "I think it's more about logistics. Trying to line it up with their rotation. It's definitely an honor. I'm going to take it that way."

Hendricks was 7-5 with a 3.03 ERA this season, but he was the best Cubs pitcher down the stretch. He compiled a 2.19 ERA after returning from the disabled list due to a sore tendon in his pitching hand.

"He's done such a good job for us," Lester said. "He's been consistent. He deserves this. It's a huge honor to pitch Game 1 of any series. I'm happy for him. This is kind of the next step."

Hendricks, who led the majors in ERA in 2016, has often been compared to Hall of Fame pitcher Greg Maddux in style, and the results are starting to follow.