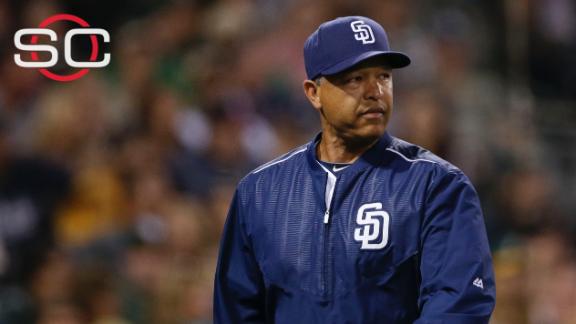 The team announced Roberts' hire Monday and said he would officially be introduced at a news conference at Dodgers Stadium on Dec. 1.

USA Today reported Monday that Roberts will get a three-year contract with a fourth-year option.

Roberts, whose father is African-American and mother is Japanese, will be the first minority manager in the storied franchise's history.

"It's hard for me to put into words what it means to be named manager of the Los Angeles Dodgers," Roberts said in a statement. "This is truly the opportunity of a lifetime. The Dodgers are the ground-breaking franchise of Jackie Robinson, Roy Campanella, Sandy Koufax, Maury Wills, Fernando Valenzuela and Hideo Nomo. When I put on this uniform as a player, I understood the special responsibility to honor those that played before me as well as the amazing bond between the Dodgers and their fans. I feel that I have now come full circle in my career and there is plenty of unfinished business left in L.A."

Roberts, 43, is a former Dodgers outfielder who played for the team from 2002 to 2004. He also played for the Cleveland Indians, Boston Red Sox, San Diego Padres andSan Francisco Giantsduring a 10-year big league career that ended in 2008. Roberts was a career .266 hitter with 243 steals, and he played in the postseason four times.

"We could not have been more impressed with him through this process. His energy is infectious and he has the rare ability to make a genuine connection with every person he comes across," Dodgers president of baseball operations Andrew Friedman said in the statement.

"He has developed strong leadership qualities and accumulated a breadth of baseball experience over his career as both a player and coach. He is a 'baseball man' and 'people person' in the truest sense of those words. We feel fully confident that he will effectively lead our team in pursuit of its ultimate goal -- bringing a world championship back to the city of Los Angeles."

He is perhaps best known for his stolen base in the 2004 playoffs, which sparked a Red Sox winning streak that culminated with a World Series championship, which had long been elusive.

In the American League Championship Series, Boston was three outs from being swept by the New York Yankees. Roberts pinch ran after Kevin Millar drew a leadoff walk from Mariano Rivera. Then Roberts stole second and scored on Bill Mueller's single.

Boston won 6-4 in 12 innings and then became the first team in major league history to be down three games to none and go on to win a postseason series. Roberts did not play in the World Series as the Red Sox swept theSt. Louis Cardinalsfor their first championship since 1918, but he will always be beloved in Boston because of that one play.

Roberts was the Padres' bench coach the past two seasons and managed one game in 2015 -- a 9-1 loss -- on an interim basis after Bud Black was fired and before Pat Murphy could arrive from the minor leagues to take over for the rest of the season.

Roberts was diagnosed with Hodgkin's lymphoma in March 2010 and later announced he was in remission. He joined the Padres as first-base coach in 2011.

Earlier this fall, he interviewed for the Seattle Mariners' managerial opening before the job went to Scott Servais.

One of the favorites to replace Mattingly was Gabe Kapler, the club's farm director. He played with Tampa Bay when Friedman was that club's general manager.