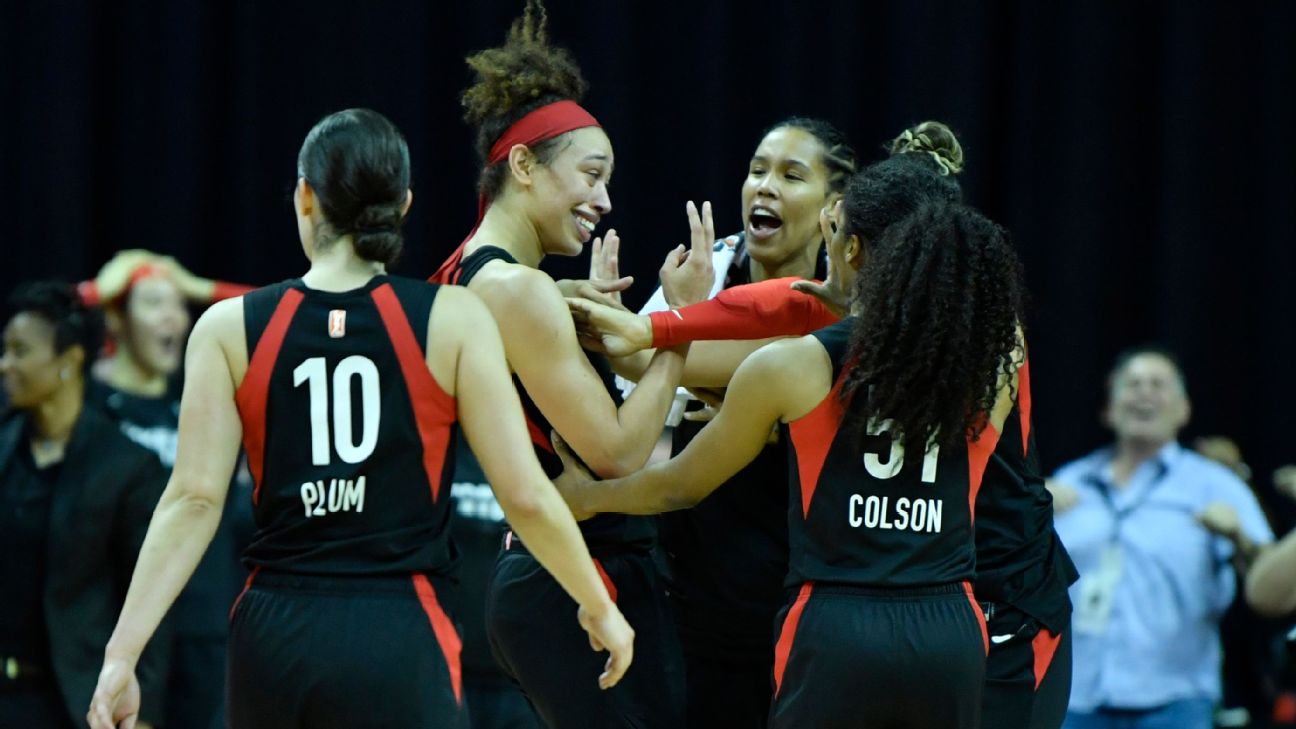 ESPN
By Mechelle Voepel
It was going to be the best shot of Dearica Hamby's career, or one of her biggest mistakes. What was on the line was nothing less than the Las Vegas Aces' season.

The No. 4 seed Aces trailed No. 5 seed Chicago by two points in a WNBA single-elimination second-round game. When the league went to this format in 2016 -- with one-and-done games in the first two rounds -- WNBA officials said it would approximate the feel of the NCAA tournament.

Who would have guessed Hamby, who went to Wake Forest and never got a chance to appear in the Big Dance, would get such a March Madness-like moment in the Aces' 93-92 win? The 25-year-old forward received the WNBA's Sixth Woman of the Year award before the game, but it turned out she was the woman of the day for the Aces.

In a game of runs Sunday in Las Vegas, it looked like the Sky would be moving on to face top-seeded Washington. That would be the chance to go against Mystics star Elena Delle Donne, who pushed for a trade from Chicago before the 2017 season. What a matchup that could be.

But the Aces weren't done yet.

Chicago's sure-handed point guard, Courtney Vandersloot, who led the league in the regular season with 300 assists to just 96 turnovers, had the ball and was trying to force the Aces to foul her as the clock ticked away with less than 10 seconds left. It made sense: Vandersloot shot 85 percent from the foul line this season, and is at 83 percent for her WNBA career.

But Vandersloot dribbled a little too far back toward her own basket, and then seemed to realize she needed to get the ball over half court. She tried to hit teammate Diamond DeShields with a pass. The 6-foot-3 and extremely quick Hamby saw it coming and stepped in front of DeShields, picking off the pass with about 8.8 seconds left.

Hamby managed not to step out of bounds, which was feat itself, then dribbled a couple of steps and ...

But wait -- why was she going for a desperation 3-pointer from 38 feet when the Aces had plenty of time to set up a much closer shot? Hamby acknowledged afterward she lost track of the time and just let it fly.

A missed shot and a Sky rebound, and Hamby's and Las Vegas' season might be over. Instead, the Aces won their first WNBA playoff game.

"I was in shock. I almost fainted," Hamby told the Las Vegas Review-Journal of her shot going in. "That was amazing. I'm still in disbelief."

Hamby is known for her non-stop energy, even though she has a lot on her plate: One of the league's mothers, she gave birth to daughter Amaya in February 2017.

"It seems like everything became a little more important to me after the pregnancy," Hamby said earlier this year. "That sense of urgency increased for me.

"I've always been a high-energy player. That's just how I am. And then I started shooting the ball more facing up. I think I'm still a good post player as well, but whoever is guarding me, I try to use my versatility and created a mismatch."

This is the Aces' second season in Las Vegas since the franchise moved from San Antonio, and they missed the postseason last year despite a rookie-of-the-year season from A'ja Wilson. A chance to bring a playoff series to Las Vegas -- now with another star in Liz Cambage on the roster -- would mean a lot.

So that's what hung in the balance as Hamby's long, rainbow of a shot made its way to the basket. It was 20 years ago this month that New York's Teresa Weatherspoon hit what's considered the most famous shot in WNBA history, a buzzer-beating 3-pointer from beyond half court in Game 2 of the WNBA Finals against Houston. Some celebratory confetti already had been let loose from the rafters by Comets' staff in that game, but Weatherspoon's unlikely shot forced them to sweep it up and get ready for a Game 3.

A lot has happened in the WNBA in the two decades since, including the unfortunate end of the Comets. But "The Shot" by Weatherspoon was fresh in everyone's minds since she was just inducted into the Naismith Hall of Fame last weekend.

When Weatherspoon's shot went up in 1999, it looked good all the way. Frankly, so did Hamby's on Sunday. It swished with about 6 seconds left, and her Aces teammates looked to be a mix of happiness and shocked. They had gone from desperation mode to elation mode to "it's not over mode" in a manner of seconds. They still had to play defense.

The Sky were making their playoff return for the first time since 2016. Their emotions were the opposite of the Aces. They'd come into Las Vegas and seemed to have the game nearly won with the ball in the hands of their veteran point guard who just had the best season of her career. How could things have flipped so dramatically?

The Sky's last chance didn't work. Post player Astou Ndour missed a 3-pointer, and the Aces could celebrate. Earlier, Ndour had made a 3-pointer with 24.4 seconds left, the shot that gave the Sky a 92-90 lead. That looked then like it would be the shot of the game.

Then Hamby hit hers -- a huge shot after a huge steal in a huge game for a franchise that is establishing itself. It wasn't the kind of shot that had good odds, but it went in just the same. 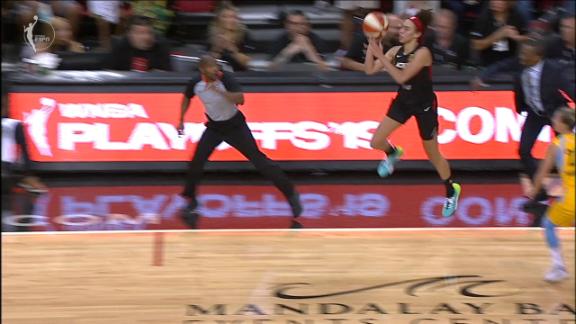