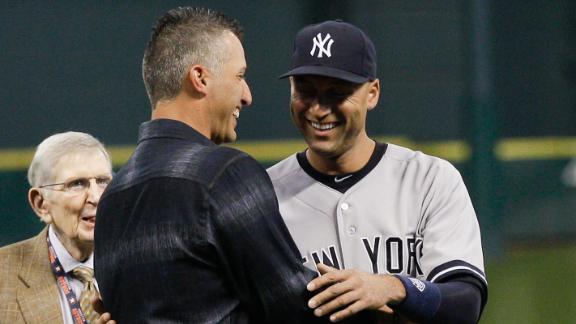 HOUSTON -- The Houston Astros passed on Derek Jeter with the No. 1 pick in the 1992 draft. On Wednesday, they became the first team to hold a Jeter retirement ceremony to honor his legendary career.

After giving Jeter a pair of No. 2 Yankee cowboy boots, a cowboy hat, a set of golf club and lessons from Tiger Woods' former coach Butch Harmon during the pregame, the Astros, led by manager Bo Porter, stepped out of their dugout in the first inning to lead the fans in a standing ovation as Jeter walked to the plate. Before Jeter stepped in the batter's box, he took off his helmet and waved to the crowd. He then grounded out.

"It was nice that they took the time to honor me, and it kind of caught me off guard when the Astros guys came out my first at bat," Jeter said after the Yankees' 3-1 loss. "It's kind of odd, the second game of the season. So that one caught me off guard. It was much appreciated."

Jeter had only appeared in one series in Houston prior to Tuesday's opener. He could have played in many more.

In 1992, the Astros selected Phil Nevin with the No. 1 pick, allowing Jeter to fall to the sixth choice, where the Yankees, Jeter's childhood team, nabbed him. Wednesday in front of a sparse crowd for the pre-game ceremony, the Astros had Roger Clemens, Andy Pettitte, Mike Stanton, owner Jim Crane, longtime team play-by-play man, Milo Hamilton and golfers Mark O'Meara, Johnson Wagner and Lucas Glover on the field with Jeter. The Astros had a short video tribute and then the public address announcer read a concise script. No one on the field spoke during the short festivities that took place 15 minutes before first pitch.

"I don't think he is crazy about it," Pettitte said of Jeter because the ceremonies will interrupt his meticulous routine.

"He knows he has to go through that," Pettitte added, "It is something he has got to do. He has been too great of a player and an ambassador for this game."

In 2013, teams around the majors feted Mariano Rivera with retirement gifts. His last series occurred at Minute Maid Field, where the Astros gave him a painting. Clemens was on hand for those festivities as well.

"It will be interesting for me to watch how they are different from Mo's," Joe Girardi said.

Girardi said that during the tour, he could foresee Jeter possibly asking teams to make adjustments so it doesn't interfere with his preparation.

"I know that Derek is crazy, crazy, crazy about his routine," Pettitte said. "If it is real quick, I think he'll get used to doing that as he travels from city to city. I think each time it will get a little bit easier and he'll realize what he has to do."

Peterson is friends with Clemens, according to Jeter, which is how he completed the eclectic group.

Clemens and Jeter have been friends for a decade-and-a-half. Prior to Clemens being traded to the New York Yankees, Clemens drilled Jeter with pitches on many occasions. When Clemens arrived for spring training in 1999, Jeter stepped in the batting cage wearing full catcher's gear from head to toe, which broke the ice between them.

"I used to hate facing Roger," Jeter said on Wednesday. "He used to hit me all the time. I didn't know him well. Playing with him, he was a great teammate. Our friendship developed when we played together."