Detroit Red Wings need to be patient in rebuild; streak unlikely to be matched 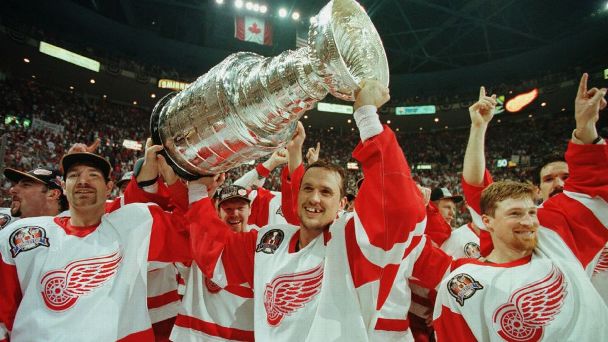 The Detroit Red Wings' 25-year playoff streak is over. So, what's next for the storied franchise? And which team is most likely to come close to matching one of the best team streaks in sports? Scott Burnside and Pierre LeBrun discuss.

Burnside: So, my friend, where were you in the spring of 1990, the last time the Red Wings missed the playoffs? I was a young news reporter at the Windsor Star, living in a renovated garage on a large pork farm on Snake Lane in Maidstone Township. True story. But the one constant in hockey has been Detroit's annual entry in the Stanley Cup playoffs. That streak is over, of course, and it's fair to wonder if this is a bump on the road or a full-fledged detour. One of the hallmarks of the team's sustained success has been the continuous evolution of critical pieces of the lineup. Brendan Shanahan and Steve Yzerman left, and Henrik Zetterberg and Pavel Datsyuk filled the void. Nicklas Lidstrom came and seemingly never left. But these days, the Wings are one of the worst offensive teams in the league, and their power play stinks. They're not really good at stopping the puck, either. For me, it's a question of whether that next generation is in place and just needs maturing or whether this is something more dire in terms of the team's development. Are Anthony Mantha and Andreas Athanasiou ready to be everyday difference-makers? Can Tomas Nosek and Evgeny Svechnikov provide that next wave? I'm skeptical that this is a one-year turnaround, but the other lesson learned over the years of predicting the team's demise is to never sell the Wings short.

LeBrun: In the spring of 1990, I was 18 and my Hearst Lumberkings were about to win the All-Ontario midget B hockey championship. I had a hockey mullet like nobody's business. I also remember how much I enjoyed watching Yzerman play, and you could tell what was coming for the Red Wings -- although it certainly took longer than they would have liked to win a Cup. It is really unbelievable to me that a team was able to make the playoffs for 25 straight years, the last decade of which was in the salary-cap era. As the Wings move into their new building with the streak over, a couple of thoughts jump to mind. It really was a detriment to the team, in the big picture, that they squeezed into the playoffs the past few years, just to lose in the first round and miss out on key draft lotteries. They would have been much better served bottoming out the past few seasons to get a shot at Connor McDavid, Jack Eichel, Auston Matthews or Patrik Laine. Easier said than done, especially when Datsyuk was still around, to have your team sink; there was still too much talent for Detroit to be a bottom-feeder. But wouldn't you know it, in the season when they'll finally have a top-10 pick, the draft isn't very good. Which is why there's no quick turnaround ahead. There are already some good, young players in the organization, so the retooling has begun. But it willbe more of a gradual thing, improving the team bit by bit and not an overnight thing.

Burnside: So, big picture, what are the chances that we'll ever see anything like this kind of sustained playoff run again? The Pittsburgh Penguins are the only team with a streak in the double digits, as this spring marks their 11th straight trip to the postseason. (They last missed the playoffs the season after the 2004-05 lockout.) As long as Sidney Crosby is wearing a Penguins jersey, it's hard to see them missing; and general manager Jim Rutherford and predecessor Ray Shero have stocked the franchise with top young players. The Chicago Blackhawks haven't missed since 2008, and we know the magic that GM Stan Bowman has revealed in retooling his team after three Stanley Cup wins since 2010. But as Patrick Kane, Duncan Keith and Jonathan Toews age, will the Blackhawks by necessity eventually follow the Red Wings' path out of the playoff fray? It seems inevitable, but my guess is we willsee those two teams take a serious run at the Red Wings' playoff streak.

LeBrun: Well, the Blackhawks have a ton of terrific prospects coming up the pipeline, so they might just be able to bridge the gap when the Toews-Kane-Keith era declines. And if I had to put money on any franchise pulling off a Detroit-like playoff mark, it would be them. But I think there's very little chance any team will ever match the quarter-century mark that the Wings put up. Not in a cap era. It is just so difficult to horde talent within the constraints of the current collective bargaining agreement. All it takes, even for a good team, is three or four key injuries and your season is derailed. I honestly believe no NHL team will ever duplicate Detroit's 25-year playoff run.
Related topics:
sportsespnchicago blackhawksdylan larkinjonathan toewsplayoff streakplayoff spot25 yearsstanley cup playoffshenrik zetterbergdetroit red wingsnhlscott bowmansteve yzermaneastern conferencepavel datsyukplayoffspatrick kane
Copyright © 2020 ESPN Internet Ventures. All rights reserved.
More Videos
From CNN Newsource affiliates
TOP STORIES