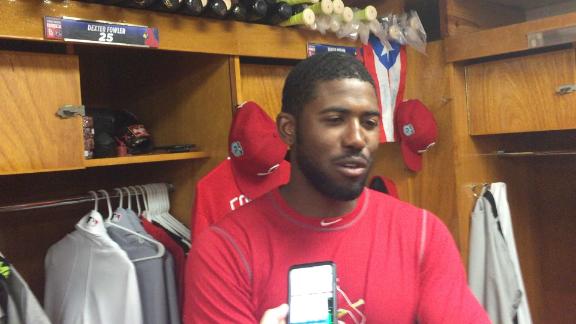 JUPITER, Fla. --St. Louis Cardinals outfielder Dexter Fowler said he did not regret comments he made to ESPN.com last week in which he called attempts by President Donald Trump to institute a travel ban on certain Muslim-majority countries "unfortunate."

Fowler's wife, Darya, was born in Iran, one of seven countries listed on Trump's first executive order, which had been blocked by a federal district court in Seattle. After an appeals court refused to reinstate the travel ban, the president has promised a new executive order this week on immigration.

"I gave nothing away. I'm always going to care for my family, and if a question is asked out of concern, I'm going to answer the question truthfully," Fowler said. "It's not to hurt anybody. It's my perspective. It's unfortunate that people think of things that way, but I believe they're sensitive. I'm not the sensitive one."

Fowler's comments stirred up the usual array of reactions on social media: some good, some bad and others vulgar. On Twitter over the weekend, he tried to assuage some of the angry fans by offering free tickets to a spring training game.

"For the record. I know this is going to sound absolutely crazy, but athletes are humans, and not properties of the team they work for," Fowler tweeted. After the Cardinals' workout Monday, he added some context to that comment.

"We're people, too. We're humans as well. That gets a little taken out of it," Fowler said. "They think we're robots or we're not individuals."

Fowler's sister-in-law, Sadaf Baghbani, remains in Qatar because she delayed her return from a business trip in order to avoid being detained, he said. The Fowlers have discussed a visit to Iran so their young daughter can visit her cousins and extended family, but they have shelved that idea for the time being.