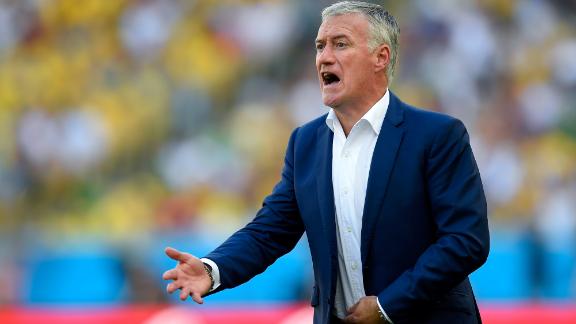 Deschamps, 45, steered Les Bleus through to the World Cup quarterfinals where they lost 1-0 to Germany in Rio de Janeiro.

Having had his contract extended through to Euro 2016 after clinching qualification for Brazil, Deschamps already has an agreement in place securing his position.

But FFF boss Le Graet -- has had an uneasy relationship with Deschamps' predecessor, Laurent Blanc -- is keen to publicly back the 1998 World Cup-winning captain.

He said: "I have just spent a month with him. We took breakfast together, lunch, dinner and sometimes even after dinner. He is very respectful towards the federation officials. But above all, the players listen to every word he says."

The 72-year-old also confirmed Deschamps would be welcome to stay another two years.

"That goes without saying. Everyone holds his work in high esteem. It's simple: I forbid him to leave."

Le Graet was also pleased with the former Marseille, Juventus and Chelsea midfielder for keeping his squad in check. There was no repeat of the controversies of recent tournaments as France left a tournament having made a good impression both on and off the pitch.

"The boys stayed together for 47 days, and I didn't see anyone step out of line," he said. "They barely shouted at each other while playing cards. They are all motivated by the same desire. I didn't see any difficult handshakes.

"[Rio] Mavuba is a good example. He is really happy, even though he doesn't play much. He's a generous boy, and a super teammate."

Le Graet added he was no longer haunted by the squad's 'bus of shame' strike in South Africa four years ago.

"I haven't been thinking about that for a long time now. When you are in charge of a company, if you look back at what happened four years ago, you never move on. We have rebuilt."