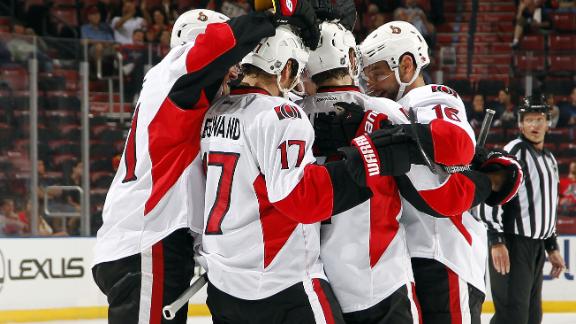 SUNRISE, Fla. -- A half hour before the Florida Panthers' home opener this past weekend, there were people waiting outside the arena to buy tickets.

The Panthers haven't won any of their first three games and have not been successful at the box office yet this season. Their announced crowd of 7,311 on Monday night was not only a franchise all-time worst, smashing the previous low of 10,063, it was also the smallest attendance figure for an NHL game in almost three years.

"I don't pay attention to that stuff when I'm playing," Panthers goalie Roberto Luongo said. "I try to focus on my job. If we want to get some people in the stands, we're going to have to start winning some hockey games."

Through two home dates, the Panthers have drawn 18,730 fans total. Eight teams averaged more than that for home games last season, and entering Tuesday, the Panthers' two home games to date had drawn the two smallest crowds in the league this season.

"I don't even like talking about it because it's out of my control," Panthers defenseman Brian Campbell said. "I have to go work hard on the ice. If you let that affect you, it's just going to make you not play at the elite level. So I stay away from it. I don't talk about it."

The Panthers' ownership group said last month that the club has steadily lost money for more than a decade, and there's been speculation -- which the team has vehemently and repeatedly shot down -- that the franchise may be moving, possibly to a Canadian city.

"It's a little disappointing," said Ottawa fan Andy Lalonde, who was vacationing in South Florida and caught his team's game there on Monday. "This would never happen in Ottawa, even on a Monday."

One obvious plus for the Senators from playing in an empty arena on the road: Hearing coach Paul MacLean bark out commands was easy.

"You've got to create your own energy for sure. That's an understatement," Ottawa's Clarke MacArthur said after his team's 1-0 win. "There was a lot of air and a lot of silence up in the stands."

Attendance woes are common in South Florida. The Miami Hurricanes struggle to get people to football and basketball games unless it's a marquee opponent, the Miami Marlins are traditionally near the bottom of baseball's attendance rankings, the Miami Heat were draping off sections of their arena a few years ago to reduce capacity, and the Panthers have rarely seen full houses.

It also can't help that the Panthers haven't won a playoff series since 1996.

"This city seems to need wins, whether it's football, baseball, basketball," said Senators goalie Craig Anderson, a former Florida player. "You need to win games to get fans in the building. A couple of years ago they were in the playoffs and they had great crowds. It's a matter of them putting some wins together and getting the fan base to come back."