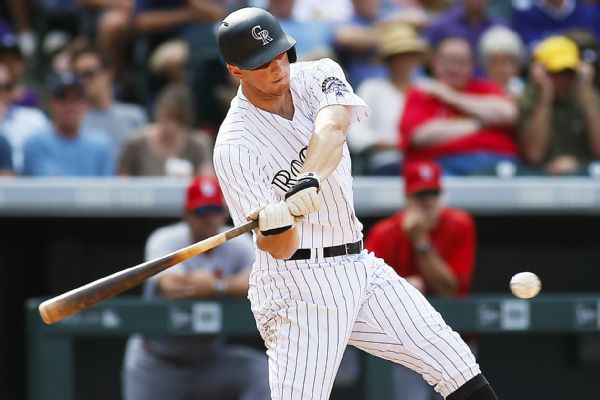 Colorado Rockies second baseman DJ LeMahieu won the National League batting title with a .348 average after sitting out both Saturday and Sunday against the Milwaukee Brewers.

LeMahieu also sat out Wednesday and Thursday at San Francisco. He went 0-for-2 on Friday in the Rockies' 4-1 win over the Brewers and left the game in the fourth inning with a .348 average, one point better than that ofWashington Nationals second baseman Daniel Murphy, who has been sidelined with a strained buttocks.

"Certainly one of the best storylines of this season, especially when you take into account the guy, the type of guy DJ is and how hard he's worked to achieve that,'' Rockies manager Walt Weiss said. "That's no small achievement to win a batting title in this league.''

Weiss said Friday that if Murphy were healthy, he would have let LeMahieu play and let the two players contest the batting title on the field.

"It's a unique situation because Murphy's injured, he's not playing," Weiss said. "If he's playing, they could fight it out. I don't want DJ to lose a batting title that way [with Murphy not playing], so I'm going to pay attention to the math. My philosophy, whether you like it or not, is I'm going to take care of the guys who take care of our team. DJ's one of those guys that takes care of our team."

Murphylast played in the field on Sept. 17. He appeared as a pinch hitter on Sunday but was 0-for-1 to keep his average at .347.

LeMahieu told reporters before Sunday's game that he understands Weiss' thinking, but it has been a difficult week to sit on the bench.

"It hasn't been a very fun week," he said, according to the Denver Post.

Following the game, he told reporters it was "a relief" to win the batting crown.